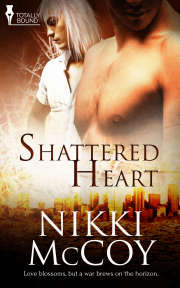 In a world of devastation and slavery, two men must find the courage to overcome the pain of their pasts and fight for what they believe in–or fall, forever lost, to the ravages of war.

Biochemical war has devastated the landscape. Societies have fallen to territorial battles and new laws have arisen, of which leaders were made by blood and force, and slavery was condoned.

Markus is a man who has lost everything. Cold and precise, he rules his territory with an iron fist. Nothing could break through his barrier of control. Until he meets a boy who challenges his emotional restraint.

Corin, born of rape and forced to work as a pleasure slave, has suffered through pain and degradation for as long as he can remember. His will to live has been all but destroyed by the hatred and abuse of his parents. Yet, he survives on the love of his sisters and the hope for a better life.

That hope is nearly ended, however, when his parents sell him to Markus. Now in the hands of the most feared man in the territory, he must find a way back to his sisters. But that path is not so easily taken. Under Markus’ control, he learns that being a slave is not about losing oneself, and that having a Master to show him the seduction of submission might be something he’d been searching for all along.

As the seeds of love grow unexpectedly between them, a war brews on the horizon. Can Corin trust that Markus would do anything to keep him and his sisters safe, or will he deny that which his heart cries out for?

Corin yanked the wrench one last quarter turn, sat back on his heels and wiped the sweat from his brow. The elbow drainpipe under the sink was like nearly everything else that held together the dilapidated hotel—deteriorated and well past the point of usefulness. He was sure the building would have been condemned long ago if there were any regulations in effect to deem it a hazard. As it was, any fool could run a business from a cardboard box, so long as the customers shelled out the green and the property rent was paid each month.

Standing, he turned on the faucet and peered underneath again. When he was confident that the leak was fixed—for now—he gathered his tools and placed them in the rusted toolbox at his side. A glance at the clock on the wall showed that it was almost time for him to head to the front desk and close up shop, but if he was quick, he could squeeze in one more job. Not that it would make a difference.

He was so far behind in his duties, a beating was inevitable. It could be disputed that there was more maintenance needed than he had time to accomplish each day, but he’d made that mistake once and had learned his lesson painfully.

Corin shut off the lights on his way out, pausing in the corridor when static came through on his portable radio. Madeline’s voice rose above it, but only barely.

“Cory, I have a gentleman that wants to speak to a manager. Could you come here, please?”

Corin gripped the toolbox firmly and rushed the length of the threadbare carpet to the end of the hall. There were only two reasons why she would call for a manager, and from her high-pitched tone, he doubted that it was at the customer’s insistence. He took the exit that led to a walkway curving around the faded brick exterior of the building and re-entered through the back door of the laundry room. After discarding the toolbox onto a metal rack, he wove around a clutter of boxes and large clothes bins to the door on the other side.

As soon as he was through, Madeline crashed into him and he braced her steadily against him. Her petite body trembled in his hands as she looked up, chocolate-coloured eyes wide with fright. Just as she opened her mouth, a taunting bellow came from the other side of the partition between the office and the front desk.

Corin grabbed the set of keys from his belt and quickly unlocked the office door. Pushing his sister inside, he whispered, “Lock this and don’t come out ‘til I say so.”

Madeline nodded in earnest and did as she was told, leaving the light off inside. She knew the drill, and he trusted her to stay safe until the issue was resolved. Hopefully, this would turn out to be a good night, one in which violence wasn’t the first resort. Summoning a façade of confidence and a neutral expression, he walked around to the desk and assessed the situation with a practiced eye. There was only one man in the lobby who straightened from where he leaned over the counter and gave Corin a once-over. His dirt-caked clothes looked as if they’d fallen from the sky and landed on him. The putrid odor contaminating the air spoke of days, if not weeks, of hygiene neglect, although he didn’t appear to be wasted on drugs or alcohol. Always a plus.

The man screwed up his wrinkled face. “Who the hell are you?”

Edging his way to the far right side of the desk and the aluminum bat hidden beneath the counter, Corin replied, “I’m the manager. Is there something I can do for you?” A little closer. The knob on the bat glinted dully within sight from its position against the wall.

“Yeah, you can give me a room with that sweet little cat in it.” The man licked his lips then tipped his head in the direction Madeline had run.

Anger thrummed to the forefront of Corin’s thoughts at the lewd request. It wasn’t the first time a man had lusted after his sister, and it was hardly the best attempt, but it still drew out every protective instinct he possessed. Madeline was only fifteen, for Christ’s sake! Though her body was maturing in ways too obvious to conceal, there could be no mistaking her for a fully developed woman, and it was apparent that she wasn’t a slave. No collar circled her neck and no brands marked her body, yet that seemed to mean next to nothing when it came to most men’s hormones and their lack of inhibitions. He, more than most, knew that age was rarely taken into consideration by men like the one in front of him, and it filled him with disgust.

“She’s not for sale. If you want a room, it’s twenty dollars a night.”

The man narrowed his gaze and sneered, displaying a full row of rotted teeth. “And what if I just want her?”

“You’ll have to go through me first.” He gripped the bat in one hand, but kept it from view of the stranger. There was a lot to be said for the element of surprise.

A raucous laugh burst from the guy and he spat out, “You? I could crush you like a bug. What are you, a buck ten soaking wet?”

Corin ignored the insult. He knew his size was nothing to be intimidated by—however, that didn’t mean he was without resources. “If you don’t leave now, I’ll have to make you.” He tightened his grip, letting the man see the flexing of his biceps. With any luck, what was in his hand would be mistaken for a gun. Sometimes it worked. Other times…

Corin’s heart rate spiked when the man suddenly jumped forward and slammed his hands onto the counter in a scare tactic. More laughter rang out as Corin lurched back, despite his effort to remain in control.

“You’re lucky I ain’t into boys, or I’d show you how that piece you got can be used for something other than killing.”

It wasn’t until the man had sauntered off and the double entry doors had swung closed behind him that Corin managed to draw his next breath. Slumping against the wall, he released the bat and willed his heart to stop racing.

But it never had a chance to do so.

Corin’s lungs froze as Scott stumbled through the doors with a pint of whiskey in hand and a rolled cigarette hanging from slack lips. Black hair flecked with gray clung to his sweat-filmed forehead and he leaned into every step as if on the brink of toppling over, though Corin knew the deceptiveness of that gait. Unlike with most people, alcohol only sharpened Scott’s reflexes, giving him liquid strength as well as courage that brought out his true, sadistic nature.

Corin pressed farther into the wall as he glared at the man through the veil of his shoulder-length, white-blond hair. Promising thoughts of torture and murder filled his mind and lent him comfort. One day, he’d coat his hands with that man’s blood and spit in his face as he lay dying with no one to mourn his passing. He would make it slow, drawing his death out for as long as possible and dance to the sweet music of his cries for mercy.

Corin started, realising belatedly that Scott was now behind the desk and advancing on him with focused intent. At the last moment he remembered to avert his eyes, his hand twitching with the urge to reach for the fallen baseball bat.

“Have you finished all your chores yet?” Scott lumbered forward until his bulky frame eclipsed most of the overhead light.

A lie played on the tip of Corin’s tongue, but he swallowed it down. If there was one thing his stepfather was meticulous about, it was keeping account of his failures. Anything to give the man the opportunity to punish him—to be alone with him for a few hours. His list of chores would be checked in the morning and lying would only make the consequences worse.

Share what you thought about Shattered Heart PRINT and earn reward points.