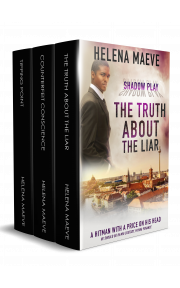 The Truth About the Liar

When hunter becomes hunted, the lines between enemy and friend are easily blurred.

A hit man with a price on his head, Arthur’s days are numbered. He should be in MI6 custody, paying penance for shooting one of their agents and killing three others. He should be at the mercy of his South American employers, who paid him handsomely to liquidate a former associate only to be rewarded with failure.

He certainly shouldn’t be alive, in the care of a nefarious figure that even the SIS is wary of crossing.

En route to meet his unlikely benefactor in Egypt, Arthur is placed into the care of mysterious, subtly menacing Klaus. A man with a near-perfect reputation for delivering scalps, Klaus is not likely to facilitate Arthur’s escape. But Arthur knows how to handle tall, dark, unnervingly handsome threats. It shouldn’t take much to win Klaus over—even if it means that Arthur must plan his next move on his knees.

On the brink of retirement, a spy will risk all.

The writing’s on the wall. Will Rowe has no illusions about retaining his post as the head of the largest Section field office in South America. Private contractors, some more lawful than others, already see to most of their interests. It’s only a matter of time before Will himself is made redundant. He’d like to think he’s made peace with the inevitable, but when a figure from his past offers one last chance to make a difference, Will can’t resist.

Caught between his duty to the agency and his commitment to protect his operatives, Will must persuade the man who nearly wrecked his career to give up the one and only constant in his world—revenge.

Ignacio was a low-grade runner for the infamous Macias cartel the last time he and Will spoke. Now he is the head of the family and a direct beneficiary of MI6 cost-cutting measures. Will knows that approaching such a man without his superiors’ knowledge or approval is a perilous undertaking, but he doesn’t expect his body and heart to become forfeit. As events spiral out of his control, Will finds himself at the mercy of an old lover intent on awakening desires he long thought suppressed.

He has nothing left to lose. That makes him dangerous.

Ex-con Elijah has run out of ways to make ends meet. Picked up by police in a bum-fighting sting, his only hope is the sister who landed him in prison many years ago. But catapulted into a world of veiled state interests and deadly secrets, Elijah soon finds himself torn between a past he cannot outrun and a spy whose dilemma he understands better than he’d like.

Nate, an Englishman whose comings and goings are as suspicious as his gratuitous kindness, offers Elijah the second chance he didn’t realize he was praying for. It’s not long before living out of each other’s pockets brings clandestine desires to the surface, threatening the fragile peace Elijah finds in Nate’s home. A peace that may have been nothing more than a smokescreen to begin with.

The note of optimism in her voice echoed loudly and clearly through the loft. Perhaps this time, her loyal service would be rewarded with that long awaited, cathartic gunshot.

Arthur flexed his aching hands, metal cuffs clinking uselessly against his thighs. Is this really necessary? He’d feigned disappointment when Jules tied him down again this morning, but he couldn’t blame her. He had tried to escape again last night.

And two days ago.

He simply couldn’t seem to behave himself.

That Jules’ patience had run out was obvious. Theirs was an old enmity, chiseled through long days in isolation, only each other’s unwelcome company to banish the silence.

It was little wonder that Jules had begun to think a dead charge was preferable to a living one.

Whatever answer she received from the voice on the other end of the call thinned her lips. She turned to the window, giving Arthur her skinny back, and the wide bell curve of her hips. Jules was neither tall nor broad. With her shaved head and fine wrists, she looked as if she would have been more at home in a yoga studio, telling her pupils when to breathe in and when to breathe out. If at all.

She should have been an easy opponent to take on, but Arthur still nursed a shattered, useless hand and a knee that was barely strong enough to hold his own weight. Perks of being shot. He resented his infirmity nearly as much as he’d resented relying on Jules these past four months. He felt like a pig being fed and cared for so he could be turned into pork.

At least that would have made sense. After all, he’d shot an MI6 asset. Deliberately. He had, as far as anyone knew, attempted to murder one of Jules’ friends. Twice.

And he had failed.

Arthur knew what came next.

Sooner or later, there would be retribution, whether from Jules and friends, MI6 or his former employers. No one liked loose ends left dangling in the wind, privy to too much information, steeped in too many behind-the-scenes scandals.

There was no way of fixing a gun with a crooked barrel, yet here he was—stuck in limbo, tied to a chair. A prisoner.

“The leg’s mostly healed, but I don’t know if—”

The voice on the other end of the line piped up again. Arthur strained to make out the inflection, perhaps even the gender of the speaker, but he couldn’t distinguish more than a low-level hum in the silence of the warehouse.

He’d heard of Robin, of course. Rumor had it he was supposed to be some sort of spy-turned-mercenary, turned unlikely ray of hope for their entire lawless breed.

Arthur pictured a six foot tall wrestler with tattoos climbing the sides of his neck and a latticework of scars crisscrossing his shoulder blades. Someone like that made sense, but knowing the types MI6 recruited, it didn’t seem likely.

Still, Robin, whoever he was, must have been scary to convince people like Jules to come around to his worldview.

Peaceful coexistence. Arthur tasted ash in his mouth at the comical idea.

“That’s one long trip,” Jules muttered, voice barely louder than a whisper. “No, I know, but… You think he’s willing?” The thwarted hope she’d offered earlier had become wary hesitation.

Arthur perked up as she spun to face him, his smile dialed all the way up to you can’t hurt me. His senses pricked, just in case Jules decided to go off-script after all. It certainly wouldn’t be difficult. They both knew how to frame someone for murder, how to stage a suicide. And she wouldn’t even have to work hard to persuade Uncle—whoever Robin was, he hadn’t made the trip to look Arthur in the eye yet. He’d never know if suicide was actually murder.