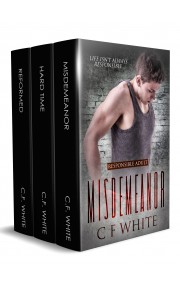 After Micky O’Neill is remanded in custody for breaching his court order, his already tempestuous relationship with Dan Peters is tested to the limits.

Having to battle their way through a court case that could end with Micky in jail, social workers breaking up the family home and the return of Micky’s deadbeat father, it seems everything is set to destroy their relationship before it even has the chance to start.

With such high stakes involved, not just for Micky but for once-burned, twice-shy Dan, they both have to learn that falling in love isn’t always responsible.

Reformed
Someone has to be responsible.

Things are fine…until Dan begins his dream career as an English teacher at the local school and Micky, main caregiver to Flynn, is isolated in a village that only serves to remind him of his mother’s absence.

With Flynn’s health deteriorating and his needs becoming more complex, everything is tested to its limits and Dan seeks solace in a friendship with a fellow teacher, sending Micky into further turmoil.

After an accusation is leveled against Micky and it seems he’s slipping back into his old ways, he and Dan are torn asunder. To repair the rift, both have to accept responsibility—for life.

Share what you thought about Responsible Adult Box Set and earn reward points.