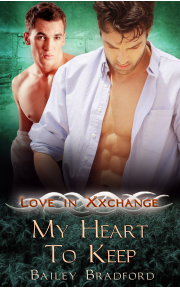 My Heart to Keep

Book 10 in the Love in Xxchange series

Fred’s been the bar manager at The Xxchange for a long time. He’s seen servers come and go. With the bar revamped and turned into a more reputable club, the last person he ever expects to see walk in is Martine, a snarky booty-boy server who worked at The Xxchange years ago then just didn’t show up one night.

But Martine isn’t really Martine—he’s Remy, and always has been. To get hired at a place he could party and have fun in, Remy had previously lied about his age and got a fake ID. Then he got into a bad relationship, one based on money and a contract no one should ever have agreed on.

After his parents commit a crime that lands Remy in trouble with his sugar daddy, Remy loses everything. The only place he can think of to turn to is The Xxchange, and the people he used to work for. If they’ll just give him a chance to prove he can be a mature, responsible adult, he might end up no longer living on the streets.

These two men come together first as rescuer and lost soul, then as friends. If there’s going to be more than that, Remy wants them to be on an equal footing. He’s learned his lesson about trying to find the easy way through life.

Reader Advisory: This book contains references to past abuse.

There was something familiar about the short, lanky man who entered The Xxchange. Xavier Talbot leaned back in the booth and nudged his husband’s foot under the table. “Chase? Does that guy look familiar to you?”

Chase Murphy glanced up from the lighting catalog he’d been studying. Though The Xxchange had undergone a rather elegant transformation five years ago, Chase was always searching for ways to keep the place updated and hip—and classy. It wasn’t the hook-up, meat market, fuck in the bathroom or on the dance floor kind of place it had been once upon a time.

Now, smooth, live jazz music filled the club with warmth and a smoldering sensuality. People came there for a different kind of enjoyment than they used to.

Chase stared at the newcomer for several moments, not moving except for the occasional breath and a couple of slow blinks. The stillness with which Chase held himself was always an incredible thing to see. It made Xavier want to spread his husband out on the table and fuck him right there, to chase that stillness away and replace it with gasping, moaning, and curses fired by need.

Xavier shifted on his seat, reaching down to adjust his erection.

Chase smirked, one side of his mouth curling up. His gaze never left the customer who was hovering just beyond the bar.

“You do that whole serious predator watching prey thing just to get to me,” Xavier accused.

“That’s just a benefit of me being a serious bastard,” Chase corrected, narrowing his eyes slightly. “We know him, somehow.” He dipped his head, gaze still on the man in question. Chase’s blond curls were caught perfectly in the overhead lighting, making the silky strands gleam.

Xavier itched to run his fingers through them. Of course, if he did so, he’d then be pulling Chase to him for a kiss. The kiss would lead to that exact fucking on the table Xavier had thought of moments before, and hadn’t the whole reason they’d re-branded The Xxchange been because he and Chase were tired of the old club being a tawdry place where people fucked…on the tables?

Xavier huffed and folded his arms over his chest. He forced himself to look at the man Chase was studying. Short, not even five four if I’m right. Skinny—not necessarily the healthy kind, either. Guess he could just be one of those people who runs to scrawny no matter what. Asshole. Xavier tried not to feel jealous of the man’s thinness because the fact was, for Xavier, the older he got, the harder he had to work to stay in shape. Mousy brown hair. Clothes are too big. They hang on him.

“He’s either sick or desperate,” Chase observed, speaking in his usual quiet tone. “Cheeks are hollowed out and he has deep circles under his eyes. Could be recovering from the flu or something. He’s nervous or high—I’m leaning toward nervous, though. His clothes are clean even if they don’t fit him, he’s not twitching like he’s agitated, but like he’s scared.”

“How can you tell the difference?” Xavier asked, trying to discern that himself. He saw the customer bite his bottom lip and glance at the bartender, Fred, as Fred prepared a drink for someone else.

Xavier glared at him.

Chase sighed, then gestured at the guy. “He’s twitchy, but not jerky with his movements. Watch his fingers, or his feet.”

Xavier turned back to the newcomer. After a moment, he saw what Chase did. The man was methodically rubbing his thumbs over the tips of his other fingers in a slow, deliberate manner, pausing on the pinkies for a second or two before moving his thumbs back over the other digits.

And his feet—Xavier noted there was a rhythm to their movement. Rock back on the heels just a bit, pause, then stand flat-footed. Wait for approximately half a minute then repeat.

“Maybe he’s got OCD or something,” Xavier mused.

“Or a crush.” Chase finally stopped staring and went back to poring over the catalog. “Except, we both think he seems familiar, and I don’t remember seeing him in here before.”

There was a vague memory trying to break free in Xavier’s mind. It was like trying to remember a word that was on the tip of the tongue—he’d struggle with it until he relaxed and let it go, then the word would pop into his head.

Xavier leaned back and closed his eyes. “Maybe he just reminds us of someone else. We’ve had thousands of faces to look at over the past several years, and before that.”

The soft sounds of Chase flipping through pages reached Xavier despite the jazz music.

Xavier tried to let go of the nagging question of the man’s identity. His brain wouldn’t cooperate. “So maybe we’ve seen him at the other bar.” The one they’d opened after re-branding The Xxchange. They’d hired someone else to manage it, though. The Xxchange was Xavier and Chase’s baby. Inferno, the raunchier club, was what The Xxchange used to be, except smaller and kind of like a neglected child whose parents were too busy for it. Xavier and Chase only went there when they needed to for business, and on the rare occasions they wanted to feel old and out of place. It wasn’t really a hangout for committed couples—or more—or anyone over age thirty, though no one was discriminated against.

But damn, Xavier felt ancient any time he was in there.

Chase exhaled, doing so loudly enough that it had Xavier sitting up straight and opening his eyes in concern. “What? What’s wrong?”

Chase was focused on the customer again. “He reminds me of one of the old cocktail waiters when The Xxchange was still a fuck factory.” He nodded. “Yeah, that might be it. Check him out again.”

Xavier did, frowning. “He looks like a skinny, nervous kid. We hired sexy—”

“Now picture orange hair,” Chase cut in confidently. “I mean orange, like that ridiculous dyed color, and add about twenty pounds. Fill out the hollow cheeks. Replace the blank expression with a kind of ‘come on, fuck me’ one. Tight leather shorts, ankle boots with heels, a mesh top.”

Xavier tried, but he didn’t have the imagination Chase did. All he could see was a cartoonish mash-up of those attributes. It wasn’t helpful. “I’m not as talented as you, Chase. Enlighten me as to who you think that is.”

Chase pursed his lips, humming as he considered the man. “A name…” The instant it hit him, Xavier knew it. Chase’s entire face lit up and he snapped his fingers. “Martine!”

“Martine Phillips?” Xavier gasped and started to argue. “Martine wasn’t capable of being reserved, ever, and that guy?” He nodded to the newcomer. “He’s too quiet and still, as in, he isn’t trying to latch onto the nearest sugar daddy. I mean, even twitchy like he is, that’s calm compared to the way Martine was, don’t you think?”

“Life experiences change people,” Chase murmured. “You and I both know that. Martine has had a whole half a decade or so to become whoever he is now.”

“Yeah, but…” Xavier looked the guy over, trying to find a reason to deny Chase’s claim. Unfortunately, all he found were similarities. “Martine was short and thin. Maybe not as skinny as this guy. He had big eyes, too, and pretty features. Almost feminine, but not quite.”

Overall the love and understanding in this book makes it a must read. Truly romantic and sweet read. One my favorite kinds to read. This one is going on my keeper shelf and I will drag it out when...

Remy and Fred were both great characters, and I loved how simple yet sweet their love ended up being like.  As with most Bradford books, there’s enough action and suspenseful moments that kept...

Share what you thought about My Heart to Keep and earn reward points.