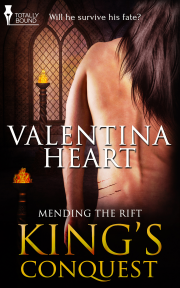 Book 1 in the Mending the Rift series

The only way for Prince Rin to save his kingdom is to marry a king and bear a child, but will he survive his fate?

In a world where two kingdoms are constantly at war, Prince Rin, heir to the throne of the Kari kingdom, has been demanded as a war conquest by King Merinej of Jeda. The prince must travel to his enemy’s kingdom and share the king’s bed, bearing him a child, or the war will continue. But the prince will not lower himself to what he sees as nothing but the title of a whore, so he demands a contract requiring the king to be faithful to him. After all, giving Merinej a child will threaten Rin’s life.

Even going into the marriage headfirst, Rin expected nothing more than a business arrangement. Instead, he receives affection, yet the more surprising realization is his willingness to give love back. However, the king cannot save Rin from those who wish him harm, and their union might be over before it can fully bloom.

“No! That cannot be! Not another one! And a prince at that! I will kill him. I will not allow anyone to separate me from my king. The prince will have to go away.”

The blood drained from my face as I watched the polished little cloud of magic that showed the speaking face of the king. My counsellors surrounded me in the ominous silence, but of course, they had probably already known what the king would demand for the price of peace. They were the ones who spoke to him, and I was nothing but an uneducated, out-of-the-blue heir.

“This isn’t happening.” I wallowed in denial, because my brain just couldn’t accept it.

“My prince,” Har, the kingdom’s head advisor, spoke. “It is only common practice for the king to demand a reward.”

I turned to look at him with what I’m sure was painful betrayal etched on my face. “But does it have to be me?”

“Our Lord King is dead, my prince. You’re next in the line for the throne,” Ske said, from my left.

“My father is barely in the ground and already I have to set his mistakes right. Isn’t there another way?” I pleaded to the faces around me.

“My prince, the king didn’t even want to hear of it.”

I bowed my head in defeat. There wasn’t anyone else. Not from the direct line. But even if there was, I could never have saved my own life at the price of someone else’s. “When does he want me there?”

I gasped. “But that means I have to leave right away!”

“Am I allowed to bring anything?”

“Just personal items. Once the territories merge again, we will fall back to the old ways. Your robes will be two-colored. At Jede Court you will not be allowed to wear the markings of Kari. The king ordered anything orange you might bring to be destroyed.”

I gasped again, not believing my ears. The boar was turning me into a prisoner.

“We must go, my prince. The king has made his demand public. If you do not comply, he will declare war upon us again,” Ske prompted.

“I do not even know what an uralain does,” I mumbled, eliciting shocked murmurs from the councilors around me. It prompted me to look up and all the widened eyes I saw scared me. “What?” I asked.

“You do not know your duties?”

“I don’t know anything. My father had all but forbade me to breathe, and now that he is dead, I am ushered into a whole new and unknown world where surely some horrors are expected of me.”

They actually looked stricken, and that didn’t help matters.

“Come, we must go. I will explain on the way,” Har said, as he came to me, waited until I moved, then followed.

“You do know about coupling?” he asked, making me blush.

“Yes. But between a male and a female. My father told me that I would never lie with a man and that such knowledge wasn’t necessary. I only know not to let seed near my markings.”

“That is most unfortunate,” Har said worriedly. “But I will acquire a book for you. A manual, if you will. It will do good to study it before you are alone with the king.”

So much for that help. All of them were forthcoming when they were afraid that I might cause a scandal or go against their advice. Not that I ever did, but they were cautious and considerate. But be it that I needed comfort, advice, or just some company, who had been there for me? Certainly no one from that group.

“Wait!” I said, grabbing Har’s hand. “Am I supposed to be at the king’s disposal?”

I loved everything about this book. It was fun and entertaining. The relationship between Rin and Meri was sweet and hot. Rin was inexperienced and Meri was a hot alpha warrior. He’s the one to ta...

I loved it and was quite surprised by the whole story. It has made a way in to my favorite list. It gives you everything you could want in a story, sexy man, spiteful enemies, passion, excitement, and...

Share what you thought about King's Conquest and earn reward points.