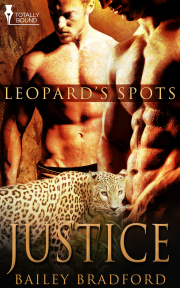 Book 10 in the Leopard's Spots series

Recovering from his past might cost Paul Hardy his life.

Paul Hardy has been rescued from a human trafficking ring, but he isn't free. The experience has left him traumatised and unable to dig himself out of his past. He's learned things no one ever should—including that shifters exist and are every bit as vicious as the beasts they become.

Snow leopard shifter Justice Chalmers spent ten years in the Marines before moving back to Phoenix and working hard to get his dream job. Being a cop is all he's ever wanted. When his younger sister needs someone to drive her to their Grandma Marybeth's place in Colorado so she can try to help a human man with her new therapy license, Justice steps up to help her out, never imagining that he'll meet his mate.

Justice and Paul won't have it easy. Not only does Paul have serious issues from his ordeal, his fear of shifters makes him a leery mate.

And someone wants to silence him permanently…

Reader Advisory: This book contains reference to past sexual abuse.

The music sucked, but Paul Hardy didn’t care. The music didn’t matter any more than the bad lighting or the lack of attractive prospects. He wasn’t picky. Just about any guy would do. As long as it wasn’t a guy he’d already been with. Paul didn’t do repeats.

It was for that reason he was at a different bar than the ones he’d been going to. Denver, Colorado had quite a few popular gay bars and clubs, but Paul wasn’t bothering with places like that, where the good boys and girls went to play. He didn’t want anything more than to get off, but even that was secondary to his true purpose, if he were to believe the shit his brother Preston had spewed at him earlier that evening.

Paul shoved all of that aside before he could get mad all over again. It had nothing to do with the fact that his brother might have been right. He wasn’t. I’m out to get laid because it fucking feels good, not because I think that’s all I’m good for. Preston’s so wrong. I’m not letting anyone fuck me. I’m the one taking control every time.

A little niggling voice in his head pointed out that he’d always preferred to bottom, had liked his men growly and on the dominant side…before.

Then his mind balked at the 'before' part and Paul approached the closest guy in order to shut up his annoying conscience.

"Hey," the man muttered. He licked his lips as Paul looked him over.

Shorter even than Paul’s five-and-a-half-feet height, too thin for it to be natural. The man’s bones seemed too big for his scrawny frame, and there was a shady look about him. His eyes were too bright, too bloodshot. Paul shook his head. He didn’t have many standards, true, but he wouldn’t risk taking advantage of someone who was too fucked up to make a decision.

"Not hot enough for you?" the man snarked. "You aren’t a prize either, ginger boy."

Paul raked him with a cold look and walked off. He hadn’t come there to fight. His cheeks burned and he was glad of the crappy lighting. Used to be he’d bleached and dyed his hair, used fading creams and even makeup to try to hide his freckles.

Of course he could never hide all of the freckles—they were everywhere, sprinkled over his face, denser on his shoulders, then a little sparser down the rest of his body. He even had freckles on his dick and balls. Those were places he’d never hated the damned things enough to try bleaching them off.

It’d been a long time since he’d tried to hide his hair and change his complexion. Paul still hated being coloured in like a joke from God, but he didn’t have the energy to fight it. Didn’t have the money, either. His job at LuAnne’s Bakery didn’t pay all that much.

There was nothing wrong with his hair or his freckles, he knew that somewhere inside, but it’d sure made him a target more than once. Everyone seemed to be hating on people like him, and had been for a while. Paul had thought it’d have died down by now, all the ginger jokes, but no.

Add to that, his orange hair and freckles had made him a coveted prize on the human trafficking market. Once his true colouring had been uncovered, there’d been a bidding frenzy…

Paul repressed a shudder as he looked for someone, anyone, to distract him from his thoughts. There were certainly enough men in the place. He could hardly walk without brushing against someone else.

When anyone dared to grab at him, Paul snarled and smacked their hands aside. He didn’t put on a friendly face, and he wasn’t there to be manhandled. Just because he was short and on the thin side didn’t mean he was a bottom looking for a big, strong man to fuck him into the wall. It didn’t mean that at all.

Stereotypes—Paul hated them, even if, a couple of years before, he’d been one himself. He wasn’t now, and people needed to get over thinking he was.

Paul shook off a hand clamping around his wrist, or tried to. He didn’t even view the appendage as being attached to anyone, because he didn’t give a shit who it belonged to, up until the point where he didn’t easily free himself.

Then anger and fear pinged off his nerves like a pinball fired at warp speed. Paul glared up at the man holding onto him. The twisted smile and excitement in the stranger’s eyes reminded Paul of all the things he was trying to forget.

His heart slammed hard a few times before racing. The shiver worked its way over Paul before he could stop it. He snapped his mouth shut, because gaping like an idiot wasn’t going to help him any. No sign of weakness would. Paul had learned there was only one language brutal people—brutal things—understood.

He slammed the palm of his other hand against the man’s throat before even consciously thinking about it. Paul’s survival instinct was immediately in high gear. The hand holding onto his wrist was gone in an instant.

"You fucking punk-ass bitch!" someone shouted at him. Paul didn’t hang around to see who. He wasn’t a coward, but he wasn’t fucking stupid, either.

Running was impossible in the crowded place. He elbowed and shoved his way towards the front doors, aware that he was being chased. If the guy he’d hit had friends, Paul would end up getting the shit beat out of him—at the very least—should they catch him.

But once he hit the doors, he could lose them. Being short had its good qualities, and one of them was that he had speed taller men lacked most of the time.

As long as they’re humans. If they were shifters…Paul thrust the door open and hit the pavement running. The bouncer yelled at him, but Paul just kept going. It wasn’t like he’d done anything wrong, except maybe, possibly seriously injure a man.

Such a good book. Definately worth the wait.

I loved this book; Paul and Justice are great togeth...

Share what you thought about Justice PRINT and earn reward points.