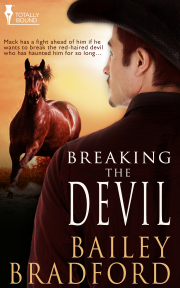 Mack Wilson gave his heart and virginity to the only man he swore he'd ever love. Justin threw that love back at him a day later, mocking Mack and his feelings. Mack never got past it, or Justin's abandonment. Justin left the day after he and Mack made love, and over a decade later, Mack gets the shock of his life when he's watching a wild, beautiful, untamed red stallion throw a hell of a hissy fit in the corral. The horse reminds him of Justin. Mack is still raw from the pain, never having gotten past it.

Mack hates Justin—doesn't he? Or will he listen to Justin and give a chance to try to make amends? Can he make amends, when there's someone waiting to tear them apart—again?

Reader Advisory: This book was previously released at another publisher. It has been revised, re-edited and considerably expanded for release by Total-E-Bound.

Sometimes Mack wondered what the hell he'd been thinking, to spend his life in Texas when he could have moved on once his father passed away. Maybe before then, even, but it'd have been one hell of a fight.

His father had been a controlling man, claiming his family more as property than as loved ones. Even from the grave, he'd probably have found a way to drag Mack home if he'd ever tried to leave.

Lord, he was getting fanciful. Too many years in the heat, probably cooked something upstairs.

Summers in Texas were brutal, cooking a man from the inside out, it seemed. August in particular was a real bitch, with temperatures frequently hitting triple digits.

He should have moved somewhere like Montana, although he'd probably have died from shock when the temperature dipped below freezing. Still, he'd have got out of Texas, seen a little more of the US of A than just his part of the Lonestar State.

Oh well, what's done is done. I got my life here, and if I don't like it, ain't no one to blame but myself.

"Hey, boss, I'm gonna go check the fence along the west pasture, make sure Rancy patched it up right."

Mack grunted at Fred, one of the newer hands he'd hired—newer being relative as Fred had been there for about two years now. He waved Fred off and was left alone again with his thoughts, which was never a good thing. Mack snorted at his melancholy mood and strode from his porch across the dusty yard.

He knew where he wanted to go—the same place he kept finding himself drawn to again and again here lately. There wasn't a reason for him not to. He had a few minutes, and the hands were all out working. He could indulge himself in a few minutes of observation.

Mack stopped at the corral under the hot Texas sun, sweat trickling down his back to pool at the waistband of his jeans from the short walk he'd taken. Another few hours and he'd be soaked and smelling as rank as one of his bulls.

Well, he wasn't the only one, and a hard day's work should leave a man sweaty and in need of a good scrubbing. Preferably with someone else doing the scrubbing for him, but that wasn't going to happen. No use thinking on what it'd be like if it did.

Mack redirected his train of thought to something useful, like what he'd come out here to look at. He cocked his hip and propped one booted foot on the lowest wooden rail, his arms resting on the top one as he watched the beast inside the corral snort and paw at the ground.

Inside the corral stood the meanest, foulest stallion he'd ever seen—and also the most magnificent. A huge horse, too, his size matching his nasty disposition. Mack wondered half the time why he'd ever bothered buying the damn critter. The other half of the time he admitted it was because he didn't like anything that was easy, not in most cases, at least. While he didn't want a horse that was going to stomp him to death, he did like a challenge.

As the sun shone onto the horse's coat, Mack couldn't help but notice how that deep, dark colour reminded him of things better left forgotten. Of one man, specifically, that he wished he could forget. He'd had rich auburn hair and a temperament not dissimilar to that of the pissed-off horse now before Mack. Years ago, that temper the red-haired man had wielded had flamed hot and burned into a passion so fierce it'd left scars behind.

Shaking his head, Mack pushed back the memories of Justin. There was no use in dragging back up all that pain and longing. He'd already wasted way too much time on what-ifs and maybes. He should have learnt his lesson many times over, but one thing he had in common with that ornery red horse—he was pretty damned stubborn too. Just not stubborn enough to keep those memories buried where they belonged.

The heat must have melted his resolve because Justin kept popping up in his thoughts. It was a waste of time, because Justin was long freakin' gone, and Mack figured that he had never meant more to the man than a fast fuck, a way to get off.

Hell, he didn't just figure it, he knew it. Hadn't Justin told him so himself? Yeah, he'd broken something inside Mack all those years ago.

Sometime since, Mack had heard that Justin had joined up in the military—the Marines, specifically. He was supposed to have all sorts of medals and such. Used to be every now and then when Mack was in town, he would overhear Justin's daddy talking about his son's accomplishments, but Mack's pride kept him from making any enquiries.

If he'd had enough pride, Mack figured he wouldn't have even given enough of a shit to listen to the gossip. But those talons of need Justin had dug into him long ago had never been completely disengaged.

The old man had been dead for a while now, and Mack hadn't heard anything else about Justin for a good while. Strange, really, because his tiny little hometown was a hive of gossip. Guess there ain't no one who knows anything about Justin, so they can't talk about him.

Well, regardless, he reckoned it was a good thing he had just been an experiment. That way Justin hadn't had to worry about that whole Don't Ask, Don't Tell thing. Mack would bet even with it being lifted, there was still plenty of problems facing anyone who wasn't straight in the military. Hell, unless you was straight, you couldn't marry in most states, and your spouse didn't get military benefits anyway even if the marriage was done up all legal.

"Enough already," he scolded himself. It was a certainty that Justin hadn't wasted years-years-dwelling on what might have been. Normally Mack didn't think on it so heavily himself, but that angry red horse just stirred up memories. He really shouldn't have agreed to tame the damn critter.

The stallion snorted, pawing at the ground and tossing its head, sending that silky mane rippling in the faint afternoon breeze.

"Fuckin' red devil." Mack reached slowly into his shirt pocket to pull out a few sugar cubes. He was vaguely aware of hoof beats coming from off to the side, but didn't pay any attention since he figured it was just one of the hands coming back in from working.

Mack concentrated on keeping his body relaxed, his voice low and smooth and sweet. The words didn't matter so much, but the tone… Well, that was the trick, wasn't it? Making a mean beast listen to you, lulling it into complacency—or at least out of murderous intent. Mack extended his arm, sugar cubes in hand. Bribing the beautiful bastard hadn't worked yet, but maybe eventually it would.

This a book about Mack and Justin. After a very brief encounter Justin leaves Mack. After twelve long years, Justin returns to claim Mack. But Mack is bitter and angry after the way Justin abandoned him...

From what I understand about this book, it was released before, but Bailey has added more to the story and re-released it. With that being said, I did NOT read the original version of the book, but...

Share what you thought about Breaking the Devil and earn reward points.