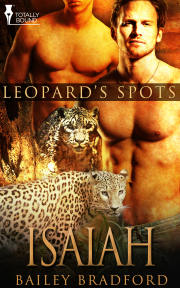 Book 4 in the Leopard's Spots series

Snow leopard shifter Isaiah Trujillo isn't a doctor like his brother Tim, but he's a good guy and when he meets Bae Allen Warren, he knows he's found the one man to make his life complete.Snow leopard shifter Isaiah Trujillo wasn't the brightest guy. His brother was a doctor with more letters after his name than in it, and Isaiah was just a mechanic. But, he strived to be a good person, and that included accepting the offer to volunteer at a GLBTQ youth centre.He's nervous as hell, but Isaiah's determined to do what he can to help.Bae Allen Warren is a veterinarian with a mobile practice. It allows him more freedom than having an actual building he had to work out of. He had more baggage than any man should, thanks to his messed up shifter family. His lepe, or clan, was a source of constant stress and guilt. But the leader, his grandfather, makes demands on Bae he can't ever fulfil for moral and other reasons.

When Bae and Isaiah meet, it's instant attraction. They know they're mates, but there's so many obstacles in their way, not the least of which are the stalkers who seem determined to kidnap Bae.

"There ya go, Mr Brinkman, she's all fixed and ready for the road." Isaiah Trujillo winked at the old man and handed him his keys. Mr Brinkman was cool, a sweet lonely widower who's partner of thirty—seven years had passed away almost eight months ago.

Mr Brinkman took the keys and caught Isaiah's hand in both of his, patting it affectionately. "I think you can call me Cliff, Isaiah. Especially after all the work you put into restoring this beauty."

"Thank you, Cliff." Isaiah fought against manners drilled into him by his mother and grandma to call Cliff by his first name. He knew it was good manners to do as he was asked by the man, too, but it just felt a little weird. He withdrew his hand after Cliff patted him one last time then Isaiah turned and gestured at the bright red '69 Camaro he'd spent all his spare time working on over the past few months. "So, are you planning on racing her?" he teased.

Cliff tittered and walked over to run a couple of fingertips over the hood of the Camaro. The thick white racing stripes down the car really made the red pop. The paint job had been an utter pain in the ass, and Isaiah had lived in fear of fucking it up, but he'd been driven to do his best on the opportunity he'd been handed. Isaiah's auto shop usually handled day—to—day repairs, and he seldom took paint jobs, but his true love lay in restoring old cars—he just wasn't sure he could make a living doing it yet. Maybe, once he built a rep for himself.

"I might just. Relive some of my youth." Cliff didn't sound like he was joking, and Isaiah became aware of the melancholy look in the older man's eyes. What was it like to have loved someone for so long, to have found your soul mate? Isaiah had seen his brother, Timothy, and his mate, Otto. Like Isaiah, they were snow leopard shifters. They were also very much in love. Would he ever find someone like that? It sure didn't seem possible. All the clubs he went to were just meat markets, places to fuck or find someone to take home for a night. Perhaps he should try somewhere else, but where?

"You know, I was driving this car the night I met Quincy," Cliff said, then he sighed and grimaced. "But I'm sure you don't want to hear about that. Probably bore you, what with all the hustling men do now days."

Isaiah frowned in return, trying to grasp what Cliff was talking about. He wasn't confused over how Cliff knew he was gay, or gay—friendly. The rainbow flag in the shop window wasn't small or possible to miss. "Hustling?" he asked.

"Screwing around," Cliff clarified. "Seems like that's the thing to do, see how many men you can have sex with. Maybe I'm just cynical, but I even hear it in my own age group, you know. Like no one actually cares about anyone, just..." Cliff huffed and flapped a hand in the air. "Just bodies slapping together. It saddens me to think so many people are missing out on a love like Quincy and I had. Still have, because I won't stop loving him." Cliff's eyes sparkled with tears that soon leaked down his cheeks. He didn't seem ashamed at all, not even swiping at them. "I don't think it's just gay men, but sometimes I wonder if love will be a thing of the past in another couple of generations."

"That's awful," Isaiah said without thinking, but the very idea made him feel kind of queasy. Then it dawned on him what he'd just done and he blushed so hard even his feet felt hot. Isaiah tipped his cap back and rubbed his forehead as he looked at Cliff through his lashes. "Sorry, I don't mean—" he stopped himself. He wasn't a liar, but how did he say what he meant without being insulting?

Cliff just nodded and caressed the hood of his car, waiting patiently. "I'm not going to get mad, Isaiah. We're talking, and I'd like to think of us as friends, if you can tolerate the ramblings of an old queen sometimes."

It made Isaiah feel a little less insecure. He wasn't the brightest guy—there was a reason his brother was a doctor and he was a mechanic—and talking wasn't his best talent, either. In fact, he was so shy outside of work that sometimes he couldn't bring himself to deal with people. Other times, he could manage a trip to a club, when he was desperately lonely, but he didn't really have to talk much then, either. Which kind of proved Cliff's point.

"Yes, sir," Isaiah blurted out, then quickly corrected himself when Cliff started to speak. "I mean, Cliff. I'd be happy to count you as a friend." One of Isaiah's very few friends, actually. Cliff nodded and waited. Isaiah hoped he got his words out in the manner he intended them to be heard. "All I meant was, it's awful to think that's the way we're going to end up. I see what you mean. I've been to Cinders"—Cliff muttered his understanding of that being a gay club—"a few times. And yeah, all it is, is a place to hook up." Blowjobs in the bathroom, sometimes even in the club itself, and the alley... Well. Isaiah wasn't going to tell Cliff what went on there. "The thing is, I don't know that there's lots of places to meet a nice man, you know? Like, how did you meet Quincy?"

Cliff beamed and his eyes twinkled with joy instead of sadness, and it warmed Isaiah's heart. Stroking the hood gently, Cliff watched his fingers. "I was driving this beauty down A1A in Florida, believe it or not." He cackled and shook his head. "Got the retirement down backwards, don't I? But I was born in Merritt Island, Florida. Anyway, here I was driving down the highway, and you have to understand, times were different. Certain things weren't talked about. I knew I was different, but there was no one I could turn to."

Great story. Loved the confrontation scenes. Such a fantastic addition to the Leopard's Spots series.

The conflict within the story added excitement as well as a air of mystery...Anytime I find myself sympathizing with not only the heroes but also the people acting as obstacles of their love I am automatically...

Share what you thought about Isaiah PRINT and earn reward points.