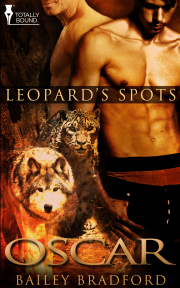 Book 2 in the Leopard's Spots series

One sexy wolf is determined to show a grouchy kitty just how perfect they are for each other.

Oscar Travis has always been different, and not just because he's a snow leopard shifter. Petite and pretty in a family where even the women are bigger and stronger than he is, Oscar has been protected by them except the times when no one could keep him safe. When he had to take another shifter's life to protect his own family, Oscar's world became a scarier place, at least in his head, not that he's going to let his family know that. He will, however, help his dad Henry hunt down the cougar shifter who is trying to destroy one of Oscar's own, his brother in law, Lyndon.

Which is why Oscar finds himself in San Antonio. Curiosity-always Oscar's potential downfall-is the reason he's in one of the city's biggest gay nightclubs. And it's his bad luck that he is cornered by four obnoxious shifters who are out to ruin his night. Josiah Baker has other plans for Oscar, plans of mates and forever, but once he makes sure his kitten is safe, he's ditched like a two dollar whore. Good thing he's a shifter too, and a determined one who doesn't shy away from Oscar's attitude. He sees the hurting man behind the pretty façade, and no one is going to keep him and Oscar from the happy ending they deserve.

Unless the cougar shifter Oscar was hunting has anything to say about it. Then Oscar and Josiah's ending will be painful and in the immediate future.

Reader Advisory: This book is part of a series and is best read in sequence.

How in the hell did he manage to get himself in such freakin’ messes? He’d lost the tips of a couple of fingers in a trap, and been pinned down in the bathroom at school more than once, had been left butt baked in the gym dressing room when some jerk had taken off with all his clothes while he showered. He’d been bullied and if he hadn’t been smart and quick, he’d probably have been hurt worse than he had.

Oscar Travis didn’t consider himself a coward by any means, but it was sure hard not to tremble with fear when he found himself cornered by four huge men. Not just men. Shifters. Like him, except they weren’t snow leopards.

They weren’t cougar shifters either, like Oscar’s brother in law Lyndon, and since Oscar had only ever been around his own kind until Lyndon had showed up, he didn’t recognise the tangy, bitter scent rolling off the four men. Huge. Shifters. So much more dangerous than mere men.

One of them-- possibly the largest of the four, though it was hard for Oscar to tell—leaned in and sniffed. "Smells like pussy to me."

Oscar’s top lip seemed determined to curl up in a snarl even though his brain told it not to as the four shifters chortled and slapped each other on the back. Yeah, they were brilliant, just like a heaping pile of—

"I don’t think this little boy is amused," another of the shifters said. This one had orange hair and freckles, and looked like he could snap Oscar in two in a heartbeat.

"Little pussy, ya mean," rumbled the third one, who smelled particularly foul. "Bet his is nice and tight. You ever had a real man fuck your pussy?"

Oscar’s cheeks couldn’t possibly burn any hotter without actually catching fire. He’d never heard the term pussy in reference to any of his own body parts before, but he was quick enough to figure out what part of him was being talked about. And he’d be damned if he was going to be gang-raped by a bunch of stinky, stupid bastards! He hoped to God the bouncers here were paying attention.

Oscar cocked his head and raked the four men with a scathing look. "I have, and I came here looking for a real man. If you assholes would move, maybe I could find one." And with those words as a warning—or not-- Oscar lashed out. He’d had enough time to start a concentrated shift, something he’d been working on—something he hadn’t known was possible until it occurred to him to try.

He was glad he had, because whipping his claw-tipped paws instead of fists from his pockets threw the four idiots for a loop and gave Oscar an advantage he desperately needed. He’d become pretty well-coordinated once he got through those god-awful teenage years—and he wasn’t going to bitch about nineteen still being teenaged, because legally he was a damned adult and had been for a year.

Oscar slashed his right hand across the biggest man’s chest while catching the orange haired man in the jaw. He tried to keep his claws out of the hit as much as he could. The same went for the one to the chest. Oscar only wanted to scare these bullies off, not kill them. Yet.

Oscar went cold inside and a shiver rolled down his back. He was always afraid he’d want to kill again, even if he hadn’t wanted to kill the first time. Still, he was part beast, part wild thing, and it’d been the untamed part of him that had ripped out another shifter’s throat.

What if it happens again? Oscar shoved the thought aside as he pulled back and prepared to strike out again. The two shifters he’d hit were each howling and grabbing at their wounds—he hadn’t pulled his punches as much as he’d thought to. Or else the idiots had lunged, he didn’t know which, it all happened so fast.

Oscar danced back until he was against the wall and glared at the other two. He held up his paws and did his best movie hero imitation, waggling two of his fingers in a ‘come on’ gesture, which wasn’t easy considering his hands weren’t humanoid. "Come on," he snarled, just in case his intent wasn’t clear.

"Pussy," the less muscular of the shifters spat. "You aren’t worth this much effort to fuck!"

"I wouldn’t let you fuck me with someone else’s dick," Oscar snarled back. He was going to point out the vast difference between fucking and what the four morons had intended to do to him, but a low rumbling growl from somewhere behind his unwanted admirers, a sound he felt more than heard, had Oscar snapping his mouth shut and some of the other shifters whimpering.

"Is there a problem?"

Oscar went weak-kneed—with relief, he told himself—as a burly guy wearing an L’Annex polo shirt stretched tight over his muscular chest. His blond hair was cut in a short military clip and he had one of those broad jaws that made a man look tough and stern, or at least Oscar had always thought so. As far as bouncers went, this guy had to be the epitome of what one should look like. Add to his chiselled looks a pair of pale icy coloured eyes and the fantasy man from Oscar’s wet-dreams had just become reality.

The orange-haired shifter pointed at Oscar. "He started it!"

Hot, sweet sex between mates, as well as dealing with an emotionally traumatized episode comes together in Oscar. The tender love story works perfectly as Oscar discovers his niche and Josiah helps...

Share what you thought about Oscar PRINT and earn reward points.