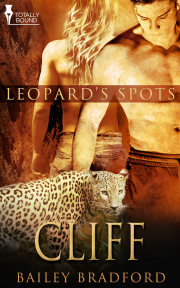 Book 12 in the Leopard's Spots series

Cliff thinks he’s too tough for love and too mean for a mate, but he has a lot to learn about the way the Fates work.

Cliff doesn’t know who his parents were—he was created in an in vitro lab run by shifters with devious plans. He’s found out a few things, but nothing prepares him for the changes coming his way when he decides to break into the clinic to search for information. What should have been a simple break-in turns into a rescue from hell and two dead shifters. To top it off, the clinic catches on fire and Cliff loses all chance of finding anything there.

But the Fates are fickle, and Cliff is one of their favourite shifters to screw around with. He’s snarky, and mean, and smart, which oddly enough endears him to them.

Not that he’d believe it when they send him a mate. Cliff doesn’t want a mate. And he sure doesn’t want the magnificent and powerful man he’s destined to be with. That’s what he keeps telling himself, and maybe he’ll eventually believe it.

When he’s promised the opportunity to break the mate bond if he really wants it, that sounds like a deal. So why doesn’t he jump on it?  He doesn’t know, and both he and his mate might not survive long enough to figure out what it is Cliff really wants.

Hunted and hunter, he and his mate are both.

Obeying had never been Cliff’s strong suit. He knew the Fates didn’t particularly want him breaking into the fertility clinic and snooping around, but he was going to do it anyway.

Not just for himself, either. There were two female shamans being held in the building against their will, their eggs being used to create litters of shifters. It was rape, as surely as the word existed, and Cliff wasn’t letting it continue.

And if he found some information that applied to himself, well, that was a bonus.

Anyway, there was no good reason for him not to break into the place. If it burned to the ground or something, there’d be vital information lost. “Wouldn’t want that to happen,” he murmured to himself as he studied the building.

It was going to be easy for him to get in. There were alarms, but he could handle those. He could handle just about anything. Sometimes he thought he was a goddamned superhero.

Cliff snorted softly. There was probably no reason for him to worry about being real quiet, because the building was empty except for the two female prisoners. He still didn’t make any more noise.

Quiet as a moonbeam… Nah, that sounds too wussy. But, fuck it, quiet as death is clichéd and overused, even if it is bad-assed…

Cliff reached the side of the clinic and sank into the shadows. Quiet as a shadow. Fuck. Quiet as the shadow of death. Does death even have a shadow? It’s not like death’s a tangible thing, an actual being. Is it?

As he moved down toward the back entrance, Cliff’s mind kept going, spinning out silly shit to keep him amused. Boredom was anathema. Cliff would rather be in agony than be bored. Maybe. He recalled some instances from his past and gave a mental shrug. Okay, so maybe not.

The outside security lights were a joke, just like the alarm system. Cliff silently sent up a request to whoever for stealthy hands. He rubbed his palms together and blew on his fingertips, then went to work.

He had everything shut down and was inside the place in under three minutes flat. He sniffed and winced. The heavy odor of chemicals lingered in the air. He couldn’t even scent the two shamans he knew were there. Deliberate, he suspected. The two doctors who ran the clinic were shifters, and obliterating scents would be wise of them, considering.

Considering they had to know someone would be coming after them. Fuckers.

Maybe they didn’t. People could get cocky, and shifters in particular could be right cunts about it all, thinking they were above everyone else and every law on Earth. And these particular shifters had been getting away with implanting shifter eggs into human women, all under the guise of in vitro fertilization.

Well, it was still IVF, but the human couples didn’t know what they were getting. Cliff wasn’t sure of the why of it all, but it couldn’t be anything good.

He cocked his head and listened intently. There was the electric hum of appliances and shit, but he quickly blocked that out and zeroed in on the rasps of breath and scrape of metal on metal.

A shiver tried to work its way down his spine, but Cliff refused to give it such freedom. He was made of much sterner stuff. Usually he listened when his instincts told him to get out, but he couldn’t very well leave those female shamans now.

Keeping all senses on alert, Cliff moved in the direction he thought the women were in. Common sense dictated that it had to be them. There was no one else in the place other than him.

Every hair on his body tingled with alarm, but Cliff couldn’t detect a reason for it. He checked for traps, security systems, cameras, people… There was nothing obvious.

Which made him just a tad nervous. Either his senses were whack, or the Fates were fucking with him. Probably the latter.

Regardless, he wasn’t going to be deterred. By the time he reached the heavy door to the room he knew the shamans were in, Cliff was dangerously close to being jittery from nerves, which pissed him off in nine different directions. He steeled himself and reached for the knob, knowing it was going to be locked.

His surprise when the handle turned easily almost spurred a hiss out of him. If his unease had been borderline explosive, now it had rocketed into the next universe. There was no reason to keep the door unlocked on prisoners unless…

A shove had the door swinging open, hard. Cliff immediately spotted the two women in the room. Hard not to when they were chained like animals. Thick cuffs were around their wrists and ankles, their necks. Both women were nude, and they turned dull, hopeless expressions on him.

Cliff did his best to not scare them. He held up his hands. “I’m here to help,” he said, but doubted they’d believe him. He’d seen himself plenty of times and knew he was a scary-looking motherfucker, all muscle-bound, tall and rough around the edges—and everywhere else.

But neither woman so much as blinked.

There. He thought he saw the flicker of something in the smaller woman’s expression. “That’s right. I’m the good guy.”

Before he entered the room, Cliff checked it over carefully, searching for traps or triggers, anything that could cause problems. He saw none, but the moment he entered he knew something was wrong. Deep inside of him, he went cold as the Arctic tundra. A dull ache spread through his body from the center of his torso. Cliff jerked his head up from where he’d glanced down at his middle, and looked instead at the women.

The bigger one was still expressionless, but the other bit her lip.

“What happened to me?” he rasped, his fingers and toes going cold.

Rather than reply, she licked her lips—and Cliff knew he wouldn’t get any answers from her, not verbally. Her tongue had been cut in half, a brutal assault on anyone, but stripping a shaman of her power to chant out loud.

Or help me. Fuck.

This was an awesome book in the Leopard's Spots series. Lots of action, drama, suspense, and mystery. Loved it. My favourite book in the whole series.

I was looking forward to reading the last book of this series. I was bugging Bailey to find out who Cliff's mate was but she stuck firm. Loved it.

Share what you thought about Cliff PRINT and earn reward points.