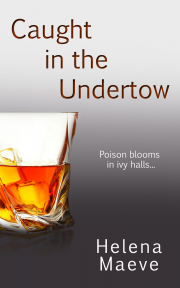 Caught in the Undertow

New to the hallowed halls of the prestigious, all-male Ledwich University, Ward fully intends to skate by on wealth and minimal effort all the way to graduation. He has no desire to make friends or revive his interest in rowing, but when luck hands him the deciding vote over another student’s admission to the club, Ward chooses discretion over decency and finds himself juggling both.

Angry, bellicose Dylan is nothing like Ward’s wealthy peers. One of a handful of scholarship students, Dylan appears to have little sense of self-preservation and a grudge against the crew captain to match. But despite ruining his chances, Ward can’t get him out of his head.

As Ledwich slowly reveals its darker side and myriad cruelties begin to play out around and because of Ward, his fascination with Dylan becomes too much to conceal. Ward and Dylan may well be the products of two different worlds, but their chemistry burns too hot to ignore. If having him means hiding, then so be it. Ward may not be certain of much anymore, but what he wants, he gets.

“Why do you wish to attend Ledwich University, Mr. Parrish?”

A single magpie hopped along the manicured green, peering around the vast stretch of lawn bordered by rose bushes and hedgerow, before promptly taking flight.

The many-paned bay window behind the dean’s desk offered a poor vantage point from which to observe the bird’s path across the campus grounds. It was more of a hothouse screen, blasting morning heat into the austere office.

Ward blinked the splash of sunlight from his eyes.

“A small, private college with a reputation for churning out America’s future leaders? I’m surprised you ask. You must have prospective students breaking down your door.”

“We do,” Dean Larsen allowed, “but almost none in senior year.” Sunshine limned her reddish-brown hair in gold, leaving her features largely in darkness. The broad mahogany desk concealed the curves of her hourglass figure, but Ward had noticed—and had noticed his father noticing—when they shook hands half an hour ago.

With Parrish Senior stepping outside to take an important call, Ward had been left to muddle through the remainder of the interview alone.

“You want the truth?”

“Only way I’m graduating is if Dad funds another campus library. He could do that at Yale or he could do it here. Difference is, Yale has a board of trustees who need to be convinced that a bribe is not a bribe. You, on the other hand…”

“We’re happy to hand out diplomas to whomever has the deepest pockets?”

Dean Larsen pursed her lips, unmoved. “If you have such a low opinion of our establishment, why bother coming to speak to me? Simply to please your father?”

It was the same question Ward had been asking himself since he’d left Connecticut.

He hadn’t been able to come up with an answer as he’d boarded his father’s jet and he lacked one now. He should have been yawning through his Econ class at this hour, or more likely sleeping off a hangover. There were bars he wanted to become better acquainted with and people who didn’t despise him yet who could be persuaded to.

He shrugged. “Yale’s got enough libraries.”

A gust of air stirred the hairs on the nape of his neck. It was his only hint of the office door swinging open and shut. Dean Larsen was no help. Her inky black gaze was like a laser.

“Sorry about that. Had to put out a few fires…” At fifty-one, Ward’s father was the kind of man people described as having presence. It was a nicer way of saying that although broad-shouldered and built like a Hollywood mobster, he was also richer than Croesus and therefore worth the detour.

Dean Larsen offered him a tepid smile. “Ward was telling me how much he’s looking forward to attending Ledwich in the fall.”

“Was he?” Benjamin Parrish rested a proprietary hand over the backrest of his son’s seat. “What a welcome surprise.”

Everyone was baring teeth so Ward went ahead and joined them, mustering a grin of his own. “Music to the ears, right?”

A muscle twitched under Benjamin’s eye.

“We’ll need to discuss tuition,” Dean Larsen went on elegantly. “As I mentioned to Ward, we don’t usually take students in their senior year…”

Benjamin nodded. “I can’t tell you how much we appreciate you making an exception. The details shouldn’t be a problem… Ward, why don’t you take a look around while we go over the details?” He was already reaching into his inner pocket for checkbook or cell phone, whatever means of payment was quicker.

Ward buried the thought. He had done his part. He’d shown up for the interview, resisted the impulse to sink his father’s ambitions past what money could save.

He had until September to worm his way out of actually attending this hellhole.

Dean Larsen’s office was separated from the hallway by a wood-paneled waiting room inhabited by a lone secretary sporting cat-eye glasses. Ward avoided her gaze as he made for the exit. The sooner he was out from under the judging stares of paper-pushers, whether living or long-dead school founders peering down at him from their portrait frames, the better.

He followed the glare of daylight through the silent corridors of the administration building, his footsteps echoing. Ledwich University had a roster of three hundred students and yet sprawled over six faculty buildings and three student dorms. Lavish grounds took up forty-three acres of woodland, stream and recreational facilities.

That steep tuition fee had to be justified somehow.

Crisp March gales buffeted his cheeks as soon as Ward stepped outside. A piney scent filled his lungs, wind-borne from the nearby mountains. He patted the pockets of his navy reefer for cigarettes.

His gaze landed on Benjamin’s car, a silver whale that gleamed in the midmorning glare like a taunt. If not for the chauffeur reading a newspaper behind the wheel, Ward might have given into the urge to scratch the paint in sign of protest. He made himself walk away instead.

The soles of his white trainers dragged through the gravel of the horseshoe driveway. With the administration building behind him, the ground underfoot quickly turned to paving stone and neatly sectioned bike lane. Sunlight glinted through the verdant branches overhead, occasionally glinting off the sleek plumage of some magpie or thrush.

It was almost idyllic—birds singing in the boughs, bumblebees darting around in a dizzy dance—until Ward factored in the shouts. They seemed out of place in such a sleepy copse, but as he tracked their echo, he began to guess their origin.

North of the oval driveway and the colonnades of faculty offices presiding over it lay a boxy gray building, all angles and glass, the image of Benjamin’s choice money-sinks. It lacked the attempts at classicism on display everywhere else around campus and looked in bad need of refurbishment. Beyond it, Ward discovered a smaller structure. As he drew nearer, he made it out to be a timber and stone boathouse, a wide dock stretching like a tongue into the green-blue river.

Three boys stood on the water’s edge, yelling invectives and encouragement at five others fighting against the current. They might have been triplets—all dressed in white shirts and white boat shorts, their biceps bulging when they cupped hands around their mouths to project their voices.

Heart jouncing against his ribs, Ward wheeled around to face the speaker.

This one was a little shorter than the rest of the pack, but he wore the university’s colors in addition to an Omega watch.

At least it’s not another Child of the Corn.

“Spying,” Ward corrected. Over the stranger’s shoulder, he noticed racks of shells and oars, and farther back, an unmistakable row of ergometers. “Pretty sure Yale does its sculling trials in the fall.”

“Yale? That’s a long way to travel just to get our schedule.”

“Technically I’m visiting the grounds.” Before I’m moved here. Not one to balk before a wolfish grin, Ward jerked his head toward the river. “Yale also does its trials in shells, but—”

“Rule number one of prospecting at Ledwich is never question the rules.”

Ward cocked his eyebrows and nodded to the stranger’s beer bottle. “Rule number two had better be sharing your juice.”

That earned him a grin—not a genuine one, but in Ward’s circles falsity was par for the course.

It was like being back in preschool, only instead of sharing building blocks, he found himself making new friends while uncapping a sweating beer. “Ward Parrish.”

They clinked bottles on it.

“Used to,” Ward confessed. Making the crew at Yale hadn’t been enough to keep his GPA up, let alone forestall calls to his father’s office about various disciplinary issues.

Nate scrutinized him with a critical eye. “Any good?”

“Maybe you should try out, then.”

The rest of the pack reluctantly tore themselves from the one-sided shouting match to finally notice Ward.

“Rayford, Sonny,” Nate introduced, pointing first to a copper-haired boy about half a head taller than Ward, then to a slightly shorter brunet wearing a severe scowl. “And this is Claude, the reason we’re entertaining wannabes in the first place.”

Claude alone offered his hand for Ward to shake. “If Nate had it his way, I’d delay graduation by another year just to stay on the crew.”

“Are you thinking of trying out?” Claude asked, ignoring him. He had a smile like a toothpaste ad, his square jaw built for billboards and yearbook photos.

He was spared an answer by the approaching quintet already in the water. One in particular had broken away from the horde, his face red with effort, his mouth a perfect oval as he lifted on one arm, exhaled, and pulled against the current.

They retreated from the edge of the dock, displeasure obvious on every face.

Share what you thought about Caught in the Undertow and earn reward points.