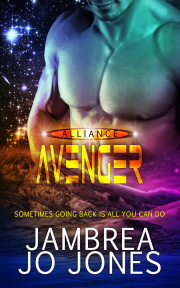 Book 6 in the Alliance series

Sometimes going back is all you can do…

Angel Carter doesn't know why he kidnapped a criminal and fled the planet. He just knows that he's confused and the man responsible is one Frank Morgan. His ship crashes leaving them both stranded on Earth, a planet that is supposed to be free of people. A perfect hide out—or it was until he's greeted by the natives.

Frank wanted to be free of a life of crime and made a deal to turn in his boss when things went crazy. He was injured in the process and woke up when the ship he was on crashed. He didn't remember much—only now he's in a jail cell with the very man he was supposed to be working with.

Will the past bring them their future?

Share what you thought about Avenger and earn reward points.