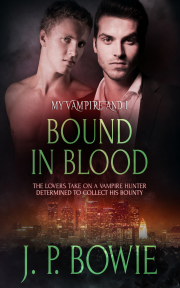 Book 5 in the My Vampire and I series

Book five in the My Vampire and I Series

A lonely vampire thinks he has found the love of his life - but his happiness is threatened by a vampire hunter determined to collect his bounty.

When Chris Jeffries is rescued from a vicious beating by a tall dark stranger, it's not difficult to imagine he'd be willing to reward the stranger with more than just a handshake. Getting to know Chris better is very much on Carlos Galeano's mind also - the lonely vampire, still grieving over the death of his lover, feels that at last he has found the one to make his existence more bearable.

The two embark on a relationship that, at first, seems to be all they can desire and hope for. But trouble in the guise of Martin Kellogg, a vampire hunter, along with Frank and Billy, two petty criminals, soon disrupts Carlos and Chris's dreams of a happy ever after ending to their idyllic bond.

Carlos turns to his friend Marcus Verano for help in thwarting the vampire hunter's attempts to track him down. Martin regards Chris as the bait that will lead him to Carlos, and after a couple of narrow escapes from the hunter, Carlos decides that in order to protect Chris, he must tell him the truth - a decision that may forever end his dream of an enduring love.

With considerable interest and excitement, Count Enrique Galvez watched the young man who had just entered the Grand Salon of the Palazzo de Granada. Tall, wide shouldered, with a mane of dark, almost black hair, and dressed fashionably in a coat of dark-green silk, the man exuded confidence and finesse. He would have been a stand-out in any social gathering, but here, amongst Madrid's nobility and jaded elite, he was magnificent.

Galvez was quick to make himself known. As soon as the man had been announced as Señor Carlos Galeano and greeted by his host and hostess, Galvez hurried across the room to where he stood making polite conversation.

"Your servant, Señor Galeano." The count bowed slightly. "I am Count Galvez, and I bid you welcome."

Carlos stared at the handsome count appraisingly. He had heard of him, and what he had heard were reasons not to seek him out as a friend. Still, garbed in a fine suit of blood-red silk, his dark-blue eyes alive with humour and mischief, Galvez seemed a suitable choice with whom to spend a few minutes of amiable conversation.

"I am pleased to make your acquaintance, Count." Carlos returned Galvez's smile and bow. "Now, perhaps you can show me where I can quench my thirst."

Galvez tucked his hand under Carlos' elbow and steered him across the crowded salon to where servants poured wine into large crystal goblets. Carlos could not help but notice the admiring stares he received from both men and women as they passed, nor the sometimes wary looks those same people cast upon his companion. Galvez picked up a goblet from one of the trays and handed it to Carlos with a quizzical lift of his left eyebrow.

"Salud." Galvez picked up another glass and, with a sultry smile, raised it. "To your health." His gaze locked on Carlos' golden-brown eyes. "And please call me Enrique. These endless formalities seem redundant nowadays."

The men sipped their wine then Carlos looked around the salon for a familiar face. "Ah, there she is," he said, relieved to see his cousin, the Lady Andorra, chatting with a group of dignitaries on the other side of the room.

"Ah." Galvez looked at Carlos from under his lashes. "She shares your beauty—a pity she does not also share your charm."

Carlos stiffened with shock at the man's rudeness, but before he could utter the angry retort that sprang to his lips, the count chuckled and touched his arm. "The Lady Andorra does not care for me and makes no bones about it. I see her coming this way, so I shall leave you immediately, although temporarily, and avoid her ire." He turned on his heel and disappeared into the noisy throng.

Carlos watched with awe as his cousin glided across the floor towards him. The Lady Andorra was a woman of unsurpassed beauty. Regally tall, she wore a gown of some golden, gossamer-like material that shimmered and drifted about her body as though it were a part of her. Her pale creamy skin and startlingly large dark eyes under a luxurious fall of black-as-midnight hair made her the envy of every woman in the room and the object of lust for every man. But if these men and women had known Andorra's otherworldly beauty hid a dark secret, their envy and lust might have turned to sudden fear.

"Carlos, you have been here all of two minutes, and already, you have conversed with that charlatan, Galvez." Andorra's eyes held reproof mixed with concern. "The man is not a worthy companion for you."

"And good evening to you too, my cousin." Carlos lifted her cool hand to his lips. "May I say you look more beautiful than ever?"

"You may." Andorra melted under her cousin's charming smile. She tapped him gently on his chest with her fan. "But please beware of men like Galvez—and the company he keeps. The Comte d'Arcy is a friend of his."

"A degenerate who, it is rumoured, dabbles in the black arts."

Carlos shivered with mock fear. "Oh, then by all means I shall avoid their company. One should be very afraid of those who dabble in what does not exist."

He grinned, and Andorra tapped him again on the chest—this time harder. "Do not laugh at me, Carlos. Galvez and d'Arcy are reprehensible scoundrels and should be barred from attending these soirées. "

"My dear cousin, if you were to bar every scoundrel from attending, this room would be near to empty."

Andorra managed light laughter. "You may be right about that, Carlos, but there are scoundrels-and then there are men like Galvez and d'Arcy. Just be careful, is all I ask."

Reviewed by Bitten by Books

Bound in Blood is a fantastic novel that has everything a paranormal junkie could ask for...I would recommend this book to anyone who wants to see beautiful men and great chemistry.

Mr. Bowie has continued his Vampire and I series with this action packed and fast paced story...Thanks go to Mr. Bowie for another edition to an incredible series.

Share what you thought about Bound in Blood and earn reward points.