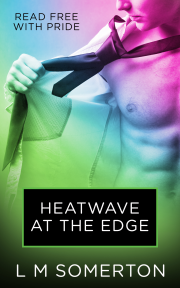 Heatwave at The Edge

It’s not often Yorkshire experiences a heatwave and all the sunshine has gone to Olly’s head. He’s not been on his best behaviour and Joe, his Dom, decides it’s time to cool him off – as if it’s ever possible to douse the flames of mischief where Olly is concerned.

Publisher's Note: This free story is linked to the Tales from The Edge series by L.M. Somerton

Share what you thought about Heatwave at The Edge and earn reward points.