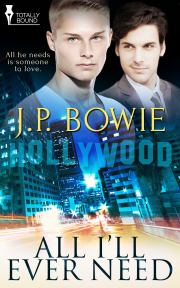 All I'll Ever Need

Edward Conway couldn’t remember just how long he’d been standing on the opposite side of the street from the Rockin’ Bar’s entrance, but he was sure of one thing—his feet, hands and nose were way too cold, and if he didn’t grow a pair and get his ass inside, he’d most likely come down with some kind of flu-related ailment. It was an unseasonably chilly night in southern California, one he’d been unprepared for, venturing out earlier without his bomber jacket that would have shielded him from the bitter wind.

“God, but you’re a pussy,” he muttered. What could be so terrible? It was a gay bar—a place he’d wanted to visit ever since he’d arrived in LA, just to see what it was like. Maybe he’d meet someone nice, talk, share a kiss perhaps… Then who knows? There was always a chance it might lead to something more, something he’d been aching for, for a long time, things he so acutely knew were missing from his life. Warmth, companionship, a friend he could open up to, a chance to feel needed… Maybe even loved.

“Go on then…” He took a tentative step forward onto the concrete strip that separated him from what he so desperately wanted. The cracked surface of the narrow one-way street now seemed as wide as the Grand Canyon, and just as formidable to cross. But cross it he must, and when he reached the other side he’d simply push his way through the door and join the throng of people inside. What could be so difficult about that?

Edward had been in Los Angeles for only four weeks, but his hometown of Ellingsworth, North Carolina, already seemed a distant place, both in miles and in his memories. He’d wanted to get out of Ellingsworth so badly he could almost taste the freedom it would bring him. When he’d finally cut himself loose from his so-called friends and family, it had been with such little regret that he still marveled at how easy it had been in the end.

After finally making the supreme effort to cross the street, he stood staring at the door of the Rockin’ Bar, closed against the chill of the night air. All he had to do was push it open and he could enter into the warmth he was sure awaited him on the other side. The decision was taken out of his hands when two young guys brushed past him, swung the door open, and one of them, giving Edward a sweet smile, held it for him.

“Th-thanks…” He grabbed the handle then followed them inside. Edward had only ever been in one gay bar before, and that had been in Charlotte, North Carolina, a city as different from Los Angeles as beer is from champagne. Edward couldn’t quite believe just how big a space the bar encompassed—it was at least half a football field long—and there was an upper floor—and everywhere there were people—mostly men, standing practically shoulder to shoulder or dancing on the huge wooden floor in the center of the bar. The noise was incredible. A wall of sound surrounded him. Laughter, chatter and the thump, thumping bass he’d only been vaguely aware of outside on the street now overwhelmed his senses, made him feel vibrant… Alive.

He headed for the bar where the bartender, a hottie wearing shorts and a big smile, asked him, “What’ll it be, handsome?”

“On tap, just for you, my pretty. Small or large?”

“Maybe a small one, to start.” The bartender’s sunny smile and flirty attitude went a long way to make Edward relax and feel glad he’d made the decision to get out and test the waters of LA’s gay scene.

“On the house.” The bartender placed a glass of amber liquid in front of Edward. “Name’s Gary by the way.”

“Edward—and thanks for the beer.”

They shook hands across the bar. “Pleasure. Like to look after our first timers, so you’ll come back.”

Edward had no doubt he’d come back. When Gary left to take care of his other customers, Edward took a long swig of his Stella, savoring the refreshing coolness and slightly nutty taste. He glanced around the bar, avoiding too much eye contact with the other patrons, but taking in the general mix of guys his own age and some older men talking, smiling, laughing in groups or couples, or simply standing alone, like himself. Despite the volume of music there was a mellow ambience present in the bar, and even the need to shout to be heard wasn’t overly irritating. He couldn’t help but compare these people with the grim faces he’d left behind.

After months of muttered innuendo directed his way in the workplace, unreturned phone calls from those he’d once considered friends, silence and hard stares from his parents, bullying taunts and punches from his brother, he’d had enough. The job he’d applied for on the Internet had seemed at first to be a bit of a stretch for him. It had meant relocation, new surroundings, no one he knew nearby—daunting prospects without a doubt—but wasn’t that exactly what he’d wanted? To shake himself free of the depression that had dogged him night and day, the inner loneliness he had felt sure would consume him completely and lead him to do something really stupid, like end his life, all because he was seen to be different in the eyes of those around him.

But was he really so different? Hadn’t he seen on the TV masses of people like him celebrating the overturning of Proposition 8 in California, the legalization of same-sex marriage in sixteen states, the end of DOMA and DADT? The world was changing, and Edward wanted to be a part of that change, wanted recognition for himself, what he was, who he was. More than anything he wanted to find another like himself, someone who would understand him, love him unconditionally just as he would love in return.

Well, that wasn’t going to happen in Ellingsworth, North Carolina—a too-small town where everyone knew not only your name but everything else about you, too. Where it was considered only right to correct what they perceived to be wrong, no matter who it hurt, no matter the fallout. When Edward, buoyed by the progress he could see all around the country, had come out to his family, he truly had not expected the hateful reaction he’d received.

They hadn’t thrown him out, but it might have been better if they had. His father had told him to never mention such a hideous thing again, never to tell anyone else of his perversion, and to pray nightly to God for deliverance from his sinful ways. However, his brother, Craig, wasn’t satisfied with his family’s judgment. He’d made it his business to let everyone they knew in on Edward’s confession. Even his father’s wrath couldn’t shut Craig up, and before long Edward had found himself ostracized by just about everyone he came in contact with. The world might be changing, but not Edward’s world, not in Ellingsworth, North Carolina. His decision to leave had been met with indifference both at home and where he worked at the local bank. He’d had a feeling the manager was getting ready to fire him anyway, after being informed of Edward’s unnatural tendencies. Yes, brother Craig had done an excellent job of character assassination.

Thanks, bro, hope I never have to look at your acne-ridden face again…

If you love a good Hollywood, this is a brilliant one to go for. It doesn’t involve famous though fictional big actors or directors, but the feeling is still there. If you like, the boy moving to the...

Tthis was a lovely story with the angst coming from secondary characters rather than Alex and Edward. I thought the whole story ended a little abruptly, but then when two men are in love and happy with...

Share what you thought about All I'll Ever Need and earn reward points.