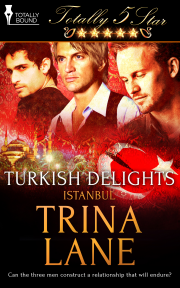 Garrett glanced up from his laptop and looked around the business class cabin of the airplane. All seemed to be in order, but something had caught his attention. Then he saw out of the corner of his eye, one row back on the opposite side, a man had spilled his drink and was frantically trying to wipe the mess off his dress shirt.

Good luck, bloke. Hope you have a spare.

Garrett had learned the hard way to have a backup shirt and tie easily accessible when traveling for work. He turned his attention back to his laptop screen and clicked Play on iTunes. He always made sure to have music on his flights. There was nothing worse than listening to the incessant drone of jet engines—especially when he had this much work that needed to be done. He blinked a few times as the images on his screen blurred. A cup of tea would really be brilliant about now.

Garrett had checked in at Heathrow at five o’clock that morning for his flight at seven. Of course that meant he’d actually left his flat in Epsom at four. He was a well-seasoned traveler, not unused to early or late flight times, but considering he’d only gotten two hours of sleep last night, Garrett was knackered. Garrett’s boss had called him to say that the officers and board of Totally Five Star Hotels, the company he worked for, had called a late meeting yesterday. They wanted to make significant changes to the design of their newest hotel in the thirteenth hour.

The flight from London to Istanbul was nearly half over, and while he would love to have a lie-down, there was simply too many items still on his checklist before landing. The newest property was scheduled to break ground in a matter of a couple of weeks, and it was now up to him to break the news of the changes to Kyle LaFleure, the primary architect on the project. Kyle had already been in transit to Istanbul when Garrett’s boss had called the meeting. Garrett knew that Kyle was not going to be happy. He’d already spent months drafting and finalizing the blueprints for the hotel. They’d already gotten approval from the building inspector, municipality, infrastructure departments, and had obtained their building permits. Basically, they’d now have to start from scratch.

Garrett rubbed his temples as a headache threatened. He wasn’t even sure if his boss’s ideas were viable for the lot they’d purchased. He sensed many long, late nights working with Kyle in his future. That wouldn’t necessarily be a bad thing, because Kyle was bloody gorgeous, but Garrett had a strict hands-off policy when it came to co-workers. The last few months working with the Frenchman had significantly tested Garrett’s resolve. It certainly didn’t help matters that he’d caught Kyle glancing in his direction on more than one occasion, either. Garrett jerked his head up quickly when someone touched his shoulder.

“Can I get you anything, sir?”

Garrett removed his ear buds. “A cup of tea? Please?”

The flight attendant walked off and Garrett dug a tiny bottle of painkillers from his laptop case—another thing he’d learned never to travel without. He placed the small capsules on his tray table then looked back at his notes. The proposed changes were complex, but if possible, they would ensure that the new hotel would be the ultimate Ottoman luxury experience, which, of course, was the goal. Since being named European Capital of Culture two years ago, Istanbul had become the fifth most popular tourist destination in the world. According to the demographics Garrett had gathered in preparation for the project, eleven point six million foreign visitors arrived each year—partially due to the city’s historical draw, but increasingly due to its emergence as a major cultural and entertainment hub.

“Here you are, sir,” the attendant said as she set his tea down.

He popped his painkillers and sighed as the warm brew fed stimulants to his veins. Garrett knew he had to have everything organized for his meeting with Kyle this afternoon, and with the pharmaceutical assistance, Garret should be able to get himself back on track.

Garrett gathered his carry-on and made his way off the plane. The local time was almost one in the afternoon. His meeting with Kyle was scheduled for three. Fortunately, his company had arranged for a car service to take him from Atatürk Airport to Beyoğlu. They’d also taken care of leasing a flat and a car since he’d be in Turkey for the duration of the project. He was supposed to pick up the car from the leasing office in the morning.

Garrett followed the signs to passport control for other nationalities after retrieving his checked luggage. He’d applied for his extended visit visa before leaving the UK. Since he’d already been to Turkey several times in preparation for the project, Garrett was familiar with which queues to enter. It seemed as if there was light traffic this afternoon, which was very relieving. He made his way up to the counter and handed over his documents to the agent. Garrett watched as the agent slowly entered his information into the computer system then stamped his passport without interest. He nodded his thanks then retrieved his identification. He collected his luggage after checking the monitors for the proper carousel then headed toward customs. Garrett didn’t have to do a spot check, so he quickly entered the arrivals hall. He looked around for the car service driver. He’d been told there would be someone holding up a sign with his name on it, but it was hard to see through the hundreds of travelers dodging each other and toting luggage through the terminal. An older gentleman nearly collided with Garrett, but must have felt that the near accident was Garrett’s fault, because he started waving his arms and cursing at him in Turkish. Garrett had picked up a few phrases on his previous trips and didn’t appreciate the man’s comments about his mother.

There was another bloke dressed in a black suit running toward the customs area. Garrett watched until the man skidded to a stop, looking around the terminal. He held up a sign and Garrett saw his name printed in large letters. He raised his hand as he walked toward the harried driver.

“My apologies for my lateness, sir. Your original driver was involved in an accident, and I’m a last-minute replacement. My name is Semih and I’m from Efendi Travel.”

“No worries. I only just arrived. I hope the other driver wasn’t hurt?”

Semih took the handle of Garrett’s large suitcase and started walking. “No, no. More damage to the vehicle than him.”

They exited the arrivals hall. As he stepped outside the glass doors, natural air hit Garrett. After breathing the canned oxygen of the airplane, the freshness was a pleasant change. The temperature was probably hovering around twelve degrees centigrade, which was quite comfortable for March. Looking up into a blue sky was a nice change from the gray visage he was used to back home. Semih led him toward the area where a bunch of taxis waited. They reached a white Mercedes minivan and Semih opened the rear passenger door. Garrett stood by while Semih loaded his luggage then climbed in.

Share what you thought about Turkish Delights PRINT and earn reward points.