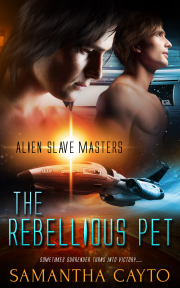 Forced to be the sex slave of an alien warrior, perpetual bad boy, Joel, finds himself tossed into the bed of a space station commander who tests even Joel’s cultivated bravado. While he’d learned to survive an abusive father, the Travian master proves to be a greater challenge. Joel soon finds himself caught between the desperate need to fight his captivity and the unnerving tug of attraction he feels for his new master.

Born to one of the lower castes of his people, Arath has worked his way up to a coveted command. His drive for success has left him isolated from his crew. He has no time or interest in caring for the pesky human pet thrust upon him by his superior. His duty allows him no other choice, so he reluctantly takes what has been given to him. He is surprised by how easily he is seduced by his pet’s allure.

Joel and Arath dance around each other and their growing attraction, until politics intrude and test their tentative feelings. The stakes are suddenly raised, and the choices they make may change the course of history for both of their species.

Reader Advisory: This book contains sex scenes of a non-consentual nature, as well as scenes of dubious consent, violence, abuse and torture.

Joel Porter owed his father a debt of gratitude. The son of a bitch had done one thing right for his only child. He’d taught him how to hide his fear. As Joel walked through the Travian space station, he kept up his mask of indifference, even though his heart raced and sweat trickled down his back. The place was huge, cavernous with a mile-high ceiling, ringed all the way up with corridors. Every meter of the docking bay and beyond teemed with people. No, not people. Aliens. And not only Travians, although most were, but other creatures that defied his imagination. How had his own race of humans ever managed to miss discovering the variety of life existing beyond their backwater galaxy?

Even though he wore clothing for the first time in what seemed like forever, he felt far more exposed than he had while naked aboard ship. Back there, nobody paid any attention to him. He’d been one of a dozen human slaves milling about, something the crew had become used to seeing. He’d belonged to Firth, too, a senior officer respected and even feared. No one had dared bother Joel. Here, as he walked next to the floating stretcher carrying Firth to the infirmary, just about everyone they encountered studied Joel as if he were a bug in a jar. They stopped and stared and even leered at him, his species having never stepped foot in this part of space before.

Joel wouldn’t give them the satisfaction of showing how afraid their attention made him. He wanted to drop his gaze and shrink away. Pride alone stopped him. Weakness, once shown, was a liability that couldn’t be easily erased. So he stood with his spine straight, looking ahead and pretending he didn’t notice any of them. He felt a tug on the leash attached to the hated collar around his neck. Back on the ship, he’d been allowed to wander around without it. Not here.

He looked down at the male nominally holding him close to the stretcher by the tether. Firth looked back at him with a tight smile. His eyes conveyed that he knew how uncomfortable Joel was and wanted to reassure him. Joel hated being on the receiving end of any kind of sympathy. That the alien understood him well enough to realize how Joel felt irked him. Unlike his friend, Wid, Joel hadn’t fallen for his master. At best, he and Firth had settled into a kind of uneasy détente—not even friends, yet not exactly enemies, either. And while he didn’t want the alien to feel sorry for him, Joel cared enough about the male to worry about him.

Some serious illness that Joel didn’t understand had taken hold of the guy to a degree that the phenomenal healing waters onboard the ship weren’t enough. He needed treatment that could only be provided by the kind of medical personnel found on a station. Instead of gifting Joel over to another officer, Firth had asked Captain Kell for permission to take Joel along. So, here they were, slowly making their way to the medical facility in the company of what Joel assumed was the Travian equivalent of EMTs. Joel had been excited at the prospect of getting off the ship. Now that he’d arrived on the station, he wasn’t so sure that he wouldn’t have been better off staying behind. At least on the ship, he knew his place. Here, he had no idea what to expect.

The trip took forever—endless halls, right turns, left turns, down open-sided lifts that caused Joel’s stomach to drop, and up moving inclines that threatened to topple him over. Always, aliens swarmed around them. Most were Travian males in their red uniforms. They dwarfed Joel, the average one topping seven feet. At five-ten, Joel felt like a child next to them. But the weirdest thing wasn’t the Travian soldiers. He’d lived with them, after all. It wasn’t even the other aliens, strange as many of them were with nonhumanoid features and skin colors he couldn’t even name. No, the thing that freaked him out was seeing Travian females. They also fascinated him.

Given their rigidly segregated society roles, no females served in the occupying forces on New World Colony Seven or onboard ship. Wid had seen Kell’s wife a few times by hologram and had described her generally, but nothing compared to the reality of it. Very nearly as tall as the males, the Travian females seemed to float around. They moved with such eerie grace. Their flawless movements were even more impressive given the elaborate gowns they wore. The material alone had to weigh a ton. Their hair and makeup matched the complexity of their clothing. Unlike the males’ hair, a few braids here or there weren’t enough. There were dozens of whip-thin ones intricately twisted and twirled in patterns. Beads and baubles were woven in as well. Their ‘face paint’ looked exactly like that—paintings. Not merely simple color enhancements, but stylistic patterns and shapes. How long did it take these creatures to get dressed in the morning?

Because his own mother had died within the first year of colonization, Joel had little experience living with women. He’d rarely seen the women on New World Colony Seven dress up and never in anything fancy. Life had been hard, work endless on the colony, with little time for frivolity. No one had the luxury of having many things that were purely decorative. He was used to practical women, not these colorful creatures that caught and held a man’s eye. Wid had said the Travian females ruled, but Joel found that hard to believe. These females looked like they did nothing other than spend time on their appearance, providing their males with provocative sights. He couldn’t help but turn his head and gape as one female floated by him with her breasts essentially uncovered.

A sharp jerk on his leash forced him to turn back.

“Don’t stare,” Firth admonished in a raspy voice that signaled his failing health.

Seriously? How could Joel not with so much female flesh on display? While he’d been fed a steady diet of Firth’s cock until Kell had rewarded him and the other boys with a choice, Joel had never acquired the taste. He liked girls, always had. It had been forever since he’d seen even a glimpse of female breasts, and as nice as his girlfriend’s had been, they hadn’t looked like that. Still, he didn’t want to upset Firth. The guy looked terrible, shrunken and even paler than the creature normally was. He also didn’t want to disrespect him in front of the other Travians.

“Yes, Master,” he said in a rushed, low tone. God, how he hated calling the alien that.

Firth rewarded his effort at meekness and obedience with another tight smile, not fooled in the least. The travel had been hard on the guy. Joel breathed an inner sigh of relief when they finally entered a room with obvious medical equipment and set Firth up on a stationary platform. Firth’s fingers relaxed their grip on the leash, but of course Joel didn’t try to move away. He stood by the alien’s head, his back to the wall and waited for… He didn’t know what. A male dressed entirely in a dark, skintight uniform fussed over Firth for a while, taking readings, giving him an injection. It seemed to ease Firth a bit as his muscles relaxed and his expression looked less pained.

This is book two in the series and I enjoyed it thoroughly.

Joel becomes an admirable character. He is a bit young and foolish but he can learn. His new owner, Arath, is an ambitious male...

The Alien Slave Masters series is definitely in a niche genre, which I will say is like dessert for me. I wouldn't enjoy a steady diet, but a taste now and then is a decadent treat.

Share what you thought about The Rebellious Pet and earn reward points.

Other books in the Alien Slave Masters seriesView Series Page