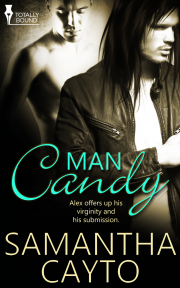 War photographer Brent faces the challenge of a lifetime when the younger Alex offers up his virginity and his submission.

As a war photographer, Brent is used to facing bullets, bombs, and bad guys. As an experienced Dom, he’s the master of the bedroom. Recovering from an injury, he plans a quiet summer on the coast of Maine. Those plans blow up when he spots the adorable stripper who captured his attention during a night of club hopping. The allure of the younger man scares him like nothing else.

Alex, a twenty-one-year-old college student and part-time stripper, is deep in the closet. He’s afraid to come out to his family yet is still dependent on them. Only one more summer to go working in the family candy shop and he’ll be free to live openly as a gay man. The sight of Brent sends him into a near panic—his two lives are about to collide. Despite his fear of being outed, he can’t deny the overwhelming attraction of the older, dominant man. But will he be able to let Brent take charge of his body and show him the ropes as he so desires?

The IED must have caused brain damage after all, Brent thought as he watched the twink on stage shake his adorable ass. It was the only explanation as to why he had agreed to join his friend Jack at a strip club. Christ, he had always avoided these places in the past. Who needed to pay to watch beautiful boys take off their clothes when it was available for free, plus a blow job, at any gay nightclub?

“Those of us over thirty,” Jack had replied earlier in the evening when Brent had wondered out loud.

He was almost right. Brent knew he was good-looking and kept himself in decent shape, too. He had to if he was going to keep up with the troops he embedded with. It was still easy enough to stroll into a club and get cruised by a few guys. Many of them were pretty young, though, and seemed to be getting younger every year. They had started calling him ‘Daddy’ and that was just creepy. Guys his age were either chasing the younger boys or were past going to clubs. They were home with their husbands, mowing their lawns and raising their kids. Even if he had wanted that kind of suburban bliss, his job as a war photographer made it impossible. His hectic and dangerous work schedule didn’t mesh with permanent and everyday responsibilities.

Which left him here, nursing a watered-down bourbon and trying to push back a budding headache. Since the IED had rung his bell months ago, he’d been getting them a lot. Even when they weren’t quite migraines, they still made him miserable. The full-blown migraines were hell. Fortunately those were getting fewer and farther between. He pulled out a couple of ibuprofen then slugged them back with a gulp of his drink and a wince.

Jack frowned. “You okay?” he asked during a lull in the music as the on-stage dancer wiggled his ass through the back curtains.

Brent forced a grin. It was nice to kick back and spend time with an old friend without worrying about bullets and bombs. “I’m fine, Mother.”

“But you’re not enjoying yourself. Want to leave?”

“I am enjoying myself,” he insisted. And he was, sort of. His dick was half hard. How could it not be given the amount of hot, young flesh parading in front of him? It would be nice if the music decibels were lowered a notch, that was all. It was going through his head like a spike. Jesus, when had he turned into a cranky old man?

“Look, let’s stay for the next dancer and then we can go to this quiet little pub I know that serves real drinks,” his friend offered.

His smile was more genuine this time. “Sounds good. I take it you like this boy coming up.”

Jack’s face transformed into that of a hungry wolf. “Danny, and yeah, he’s something special. If I weren’t in an exclusive relationship, I’d scoop this boy up and tie him to my bed.”

He laughed, understanding the impulse. He and Jack shared a kinky side, although never together. They were both tops and Doms, and neither of them were inclined to switch. Brent’s mirth died on a dime, however, as the curtain opened. He caught sight of a compact, lithe body before it became a blur of movement. The dancer executed a series of Olympic-worthy flips down the runway and finished with a twirl around the pole. He stopped upside down, and his eyes pinned Brent to his seat.

Their gazes remained locked for a few seconds. Brent’s breath froze in his lungs. His cock swelled to fullness, pressed against the fly of his jeans. His balls ached with growing need. He curled his fingers tightly around his sweaty glass because he couldn’t grab the tantalising flesh literally dangling in front of him. The cherubic face with spiky light hair lured him in like a siren. When the bow-shaped mouth curved in a teasing, knowing smile, a low moan pushed past Brent’s lips. The spell didn’t so much break as morph as the boy began to twist around the pole.

Jack shot him a grin. “What wouldn’t you give to spank that ass?”

Brent covered his eyes and stifled a groan. “Shit, don’t put that image in my head.”

Between his fingers, he watched the smooth, naked globes outlined by a blue G-string twirl around and around, and couldn’t argue with his friend. His palms itched with the desire to grab, squeeze, and hell yes, spank. He had no trouble imagining the beautiful young body splayed across his lap as he put pink on those pale cheeks. He knew he’d be hard and in his fantasy, so was Danny. The boy would cry and beg, but not for Brent to stop. No, he would be eager for the rough play, especially for a good fucking when the spanking was done.

Brent grabbed his drink and choked on a mouthful of crushed ice. It did nothing to ease his hard-on or his contemplation of Danny. The kid was popular—patrons, including Jack, flocked to the edge of the stage. They stuffed dollar bills in his thong. The kid gave each man a teasing grin of appreciation then sent them on their way. Brent didn’t want to be just one of the crowd, so he fished a twenty out of his pocket. Pushing up from the table, he sauntered to the runway. He waited for the others to dissipate before he pressed against the edge. When the boy turned his way, Brent held his gaze as he licked the bill and slapped it against a naked ass cheek.

He walked back to his seat and plopped back down. He watched Danny peel the paper from his ass, kiss it with his pink lips, and slide it into his thong. After a wink aimed straight at Brent, he back-flipped his way behind the curtain. The hoots and clapping of appreciation were deafening. Yeah, Danny had lots of admirers. He would remember Brent, though, and that would have to be enough.

I’m a sexual tension girl and Samantha Cayto kept a palpable feeling of ST throughout the book, which started in the opening chapter and kept going through to the finish, leaving me very satisfied on...

Man Candy is a great story about two people who are trying to find their way in life.

I liked this story because you really felt like the character...

Share what you thought about Man Candy and earn reward points.