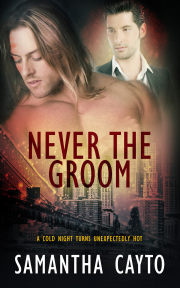 Ian Cabot has led a shy, sheltered life ever since a plane accident killed his mother and left him emotionally and physically scarred. His father’s marriage of convenience forces him into the magnetic orbit of his soon-to-be cousin by marriage. The man who meets him at the airport is just the kind of commanding man he hopes will rid him of his virginity. Too bad anything between them is out of bounds.

James Reynolds has no time or patience for his cousin’s social-climbing marriage, and even less for taking a detour to deal with the pampered son of her fiancé. As a hard-working and dedicated family man, he agrees to pick Ian up and get him to the wedding. The pretty college boy who hides half his face is not what he is expecting and proves to be disturbingly tempting.

Whatever discipline Ian and James have to keep their relationship strictly familial is tested by an unseasonable blizzard and the sexual heat they can’t ignore.

He looked around to see who had called his name. Amid the travelers bustling by, a man approached with a vaguely irritated expression. A gorgeous man with neat black hair, dark eyes and a smooth, square jaw. This had to be James Reynolds, although he was nothing like what he’d expected. Based on his father’s brief description, he’d pictured someone older and nerdier.

‘The guy must work twenty-four seven.’ Coming from his father, that hadn’t been a compliment. Reynolds was dressed in business-casual with a sports coat over a blue button-down shirt and khakis. It implied he’d been working earlier in the day. Which meant that he would be even more annoyed at having to detour to the airport to pick up Ian.

Awesome, way to make a first impression on a new in-law. There was nothing to be done about it, so… He ran his fingers through the curtain of hair on his right side to make sure it covered his face and neck before stepping forward.

God, he felt like an idiot. Of course, the man was his ride. Who else would be calling for him in Detroit, except the poor dude who’d been stuck babysitting him up to the wedding? His fear of traveling alone in strange places made him feel so stupid, yet try as he might, he couldn’t face making the journey on his own. His soon-to-be stepmother had said it would be no big deal for her cousin to drive him, but Alena didn’t strike him as the kind of woman to factor other people’s feelings too much into any equation.

The guy came up and stuck out his hand. “Yeah, I’m James Reynolds, Alena’s cousin.”

After a moment’s ingrained hesitation, Ian let go of his hair long enough to shake. The man’s palm was cool and his fingers were strong as they clasped his.

“Thanks for picking me up,” he said, dropping his gaze.

God, he’d already been worried about spending a long car ride with a stranger. Small talk was not his strong suit. But, having expected someone older, he’d anticipated questions about his studies, or something equally boring yet manageable. James was far too appealing and didn’t look a day over thirty. He was probably the type to be into sports, a subject Ian knew next to nothing about. Maybe that was for the best. He couldn’t discuss what he didn’t know.

Share what you thought about Never the Groom and earn reward points.