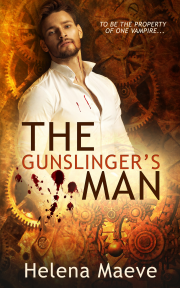 Halloran was meant to free them, but Asher has never known a harsher prison.

Hiring a band of outlaws to assassinate the mayor may be a bold move, but Asher Franklin can’t take another minute of bowing and scraping to the sadist who runs his hometown. Graveyards teem with the bodies of those who have tried and failed to rebel against the powers that be, but the legendary Red Horn Riders hold an invaluable advantage over their predecessors: They’re already dead.

Common wisdom would have it that vampires seldom keep faith with humans, though, and the Red Horn Riders are no exception. Halloran, the ruthless bandit at the helm of the gang and Sargasso’s prospective savior, would rather claim Asher for his own than grant him the fate he deserves. His unwelcome kindness is Asher’s worst nightmare. To be chattel is bad enough. To be the property of the one vampire whose duplicity just cost the lives of Asher’s friends is so much worse.

Yet in the ungoverned deserts of the Wild West, vampires are a law unto themselves and terror comes in many forms. Halloran’s bite may be sharp, but worse foes roam the sands than Asher can begin to imagine.

Under normal circumstances, Asher Franklin would’ve held his tongue when pressed for answers by bloodsuckers, but the gun pressed to his temple had him feeling chattier than usual.

“I swear—I swear I don’t know where she is. W-we ain’t been that close since we was kids. Ask around, anyone’ll tell you—”

The safety clicked off.

A bead of sweat trickled into Asher’s eye. “Swear to God, I don’t know anything!”

He liked to believe he wouldn’t have breathed a word even if he did. Any secret worth keeping from vampires was a secret worth dying for. The kiss of a cold barrel held fast against his skin threatened to test that notion.

“All right, that’s enough,” Octavian drawled. The swivel chair gave a squeak of relief as he rose, hydraulics compensating to boost the seat up to its usual height. Octavian was neither muscular nor heavyset. The first of his kind had been forged from a far heftier substance than dirt and subsequent generations had simply inherited that trait. “Boy says he don’t know, then I believe him.” He rounded on Asher, dimpled smile slithering off his mouth. His expression was as tender a hatchet. “You wouldn’t be tryin’ to dupe me, would you, Franklin?”

If there was punishment to be had for bearing false witness, then let it be earned in the name of getting Octavian and his bootlickers out of the shop.

The quiver in his voice must have been persuasive.

“Know that I’ll be back if I find out you’ve been telling tales!” Octavian warned affectionately.

The cheerful bell above the door chimed once as it swung open and again as it closed. Every last ounce of strength Asher possessed went into keeping upright until he found himself alone.

He squeezed his uncle’s desk with both hands, spine curving like a cat’s. He was all right. The phantom chill of the gun pressing into his side would soon fade.

“Asher?” His uncle’s voice echoed from the top of the landing. “Son, I thought I heard voices…”

The shop connected to the living quarters above it by a set of narrow wooden stairs and a shared porch that saw blissfully little sunshine. The setup had the advantage of fencing off private and professional spheres—an absolute necessity when the latter was festooned with cuckoo clocks, ticking pendulums and loud, booming grandfather clocks—but imperfectly. Sound traveled all too easily between the loose floorboards.

“Was it a client?” Uncle Howard’s shuffling tread did little to drown out the note of excitement in his voice.

“Not quite.” Plastering his best smile onto his lips, Asher spun around. “I was actually on my way to Pinkham’s. You need anything?”

As deflections went, that one was calculated. A trip to the general store should have been an easy feat for a man at the ripe age of forty-nine, but Uncle Howard had made a science of avoiding the outside world. Today wasn’t the day that he changed his mind.

Minutes later, armed with a better grip on his nerves, Asher strolled onto Main Street with as sure a step as he could manage. There was no sign of Octavian on the road, though Asher spied one of his goons sprawled in a rocking chair outside the Pony Inn.

Asher hurried his step and ducked into the town’s one and only saloon.

Uncle Howard wouldn’t notice if he was a little late coming back to the shop. He never did.

“Whiskey. And make it the good stuff.”

It was early in the day, but Sargasso kept its own rules as far as liquor and who got to drink it when. A man learned early and often that being drunk helped take the sting out of a whole slew of humiliations.

Behind the bar, Romero cocked an eyebrow. “And what might you be needin’ liquid courage for?”

“Octavian stopped by with the news,” Asher reported, lowering his voice.

As soon as Asher downed the contents of his tumbler, Romero refilled it, unprompted. “On the house.”

“Thanks.” After twenty years of eking out a living under vampire dominion, Asher knew better than to look a gift horse in the mouth.

“Don’t mention it. Octavian’ll come to his senses. There’s plenty more fish in the sea.”

“Uh-huh. Think I saw him at the Inn a minute ago…”

She might have said vampires and it would’ve been just as true. Mere men could always lose their heads hankering after a woman, but few had the means to chase her to the ends of the earth if they put their mind to it. Few had that kind of time.

For Angel’s sake, Asher hoped she took her whoring all the way to the North Pole.

Rye soothed his injured pride and Romero’s company had a calming influence, particularly when she assured him that Octavian was just a blowhard with no real power. Actual, physical harm to the human population had been outlawed back when Asher was just a babe in arms. Accidents still happened, of course, but there were consequences for any lowly vampire who savaged the mayor’s property beyond what could be mended with a little salve and bandage.

Halfway through feeding Asher the latest gossip floating around town, Romero trailed off, frowning at the grimy saloon window.

Outside, dust freshly stirred into orange-yellow eddies had just begun to settle around a group of riders. Asher counted seven, all in long leather dusters, their hats worn low to keep the sun at bay. Their hands, too, were covered in thick gloves.

Vampires, all of them.

“More of the same,” said Romero, as if reading his mind.

“Maybe.” Asher tracked the posse with his eyes. He didn’t want to hope because hope was dangerous, but it was nice to think that last month’s trip to the telegraph office in Redemption hadn’t been for nothing.

“Maybe?” Romero scoffed. “Octavian must’ve knocked all the sense out of your head.”

She turned her broad back to Asher and slammed the whiskey bottle down on the counter just outside his reach. Bloodsucker clientele called for a different sort of beverage.

Asher pressed his tongue to the roof of his mouth.

It was maybe ten paces from the hitching post to the swinging saloon doors. Fifteen, after a few drinks. Asher counted them down. He reached ten just as the jingle of spurs reached the threshold. His barstool creaked when he swiveled around for a casual peek.

“Welcome, gentlemen,” Romero called, the picture of nonchalance. “What can I get you?”

“This Sargasso?” asked the stranger at the head of the group. His companions fanned out around him, their boots scraping the scuffed floorboards, their hands never straying far from their holsters.

A grubby sign by the door read Check firearms at the bar. Something told Asher it wouldn’t be enforced today.

“It is,” Romero answered. “If you’re huntin’ for somewhere to stay, I got rooms upstairs, bathhouse and stables around back.”

“May take you up on that,” the stranger mumbled. He swept his narrowed gaze over the saloon and, apparently satisfied with what he saw, resumed his slow, lazy stroll to the counter. The sign by the door drew no reaction.

Asher clasped his glass in a sweating palm and tried hard not to draw attention to himself—a hopeless task, given that vampires had a knack for detecting the slightest change in a man’s heartbeat. Perspiration beaded on his upper lip and stuck his shirt to his back. He was vaguely aware of Romero filling three glasses and sliding them along, then filling three more and reaching for a fourth.

The ringleader stopped her with a raised hand. “Lookin’ for a man named Ambrose.”

Romero weighed this for a moment. “You see that big house in the heart of town?”

The rider nodded. “Thought that was town hall…”

“It is,” Romero answered, furrowing her brow.

With a headshake, the vampire propped his elbows against the bar. “Was afraid you’d say that.” Even beneath the folds of his duster, his broad shoulders and thick biceps were easy to discern.

Asher’s heart threatened to vacate his chest. He was almost sure he had a handle on who these men were and what they were here for. Not many vampires would be displeased to find the way to the mayor’s door. But if this turned out to be the reason they turned tail, then all those risks Asher had taken would be in vain.

“You ain’t from around here, are you?” he blurted, half addressing the man and half- speaking to the whiskey in this glass. Miraculously, he somehow failed to trip over his words.

The ringleader spared him a glance, eyes hidden by the brim of his low-crowned hat. A crimson sheen dappled his bottom lip, but somehow he’d managed to keep the blood out of his ginger beard.

Share what you thought about The Gunslinger's Man and earn reward points.