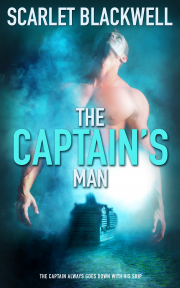 The captain always goes down with his ship…

Josh is left heartbroken and lacking self-esteem when his partner leaves him for another man. He has to take a two-week Mediterranean cruise on his own and it’s a good job his crazy neighbors, Erik and Freddie, are there to take him in hand and make him realize his true potential.

There’s another man who recognizes Josh’s obvious worth, too—the guy in charge of the ship, Captain Kane Kessler. A six-feet-two Adonis with a body just made for sin.

But Josh doesn’t want a fling and flings are what Kane specializes in when he’s working. Nevertheless, the two instantly collide—a meeting of like minds and desperate bodies. While Josh tries to come to terms with the fact that he will be another notch on the captain’s bedpost at the end of the holiday, Kane begins to realize two weeks might not be enough to get everything he needs from Josh…

Reader Advisory: This book contains scenes of auto-fellatio and voyeurism/exhibitionism.

Publisher's Note: This book was previously released under the same title. It has been re-edited for re-release.

Moonlight and the lights of Rhodes Town shone on the ink-black water. Waves lapped gently against the side of the ship. Distant music swelled and ebbed from the dining room.

He’d had a partner when he’d won this two-week cruise around the Mediterranean six months ago, shortly before Drew had left him for another man. Now Josh was here alone, thousands of miles from home. He’d flown to meet the cruise liner on the island of Rhodes, boarded, walked around suite, then come out onto the private balcony. He’d been aboard approximately ten minutes and already felt like hurling himself into the ocean.

“Shit, what are you doing, Freddie? Why are you using your teeth? Christ!”

Josh’s glance jerked sideways. He gazed across the wall separating his balcony from his neighbors’, squinting at two shapes in the dark.

“Sorry, I’ve got cramp in my leg. Fuck…” The man on his knees shook one leg out behind him violently.

“Jesus, you nearly bit my dick off.”

Josh’s face heated and he tried to sink back into the shadows in case his neighbors thought he was a peeping Tom.

It was too late.

“Shit,” cursed the man on his feet, fumbling at his pants while his partner lurched up.

The man giving the public sexual favor stepped toward the wall with a cheeky grin. Of small stature and thin, with dark hair, he was dressed smartly for dinner, even if his shirt was luminous pink. “Hi, you must be our neighbor. We were just”—he coughed—”christening the place.” He held out his hand.

Freddie’s partner approached the wall. Taller, with red hair and a nice smile, he put his arm around Freddie’s waist. “Sorry we disturbed you.”

Josh was more embarrassed than his exhibitionist neighbors. He mumbled something appropriate.

“Who’re you here with?” Erik asked.

“No one.” Josh glanced back toward the safety of his cabin, desperate to closet himself inside.

“Why not?” Freddie asked boldly.

Josh glared at him. “Because I’m sad and lonely and have no friends.” He stalked back to his cabin and slammed the door.

Music woke Josh, together with laughing and shouting. Bright sunshine streamed through the curtains. The ship was still docked at Rhodes. He stretched and turned over in bed, listening with irritation to the racket outside for a few seconds before he got up and walked into the lounge area of the cabin to pull back the curtain at the window.

Josh stared. Erik had Freddie around the waist with one arm, one thigh thrust between his as he marched him backward, dropped him and caught him before he leaned over to press a kiss to his lips as Freddie shrieked in delight.

Josh let the curtain fall back. Jesus Christ, was this what he could look forward to for the next two weeks—Erik and Freddie rubbing his face in his loneliness at every opportunity? He hated them both.

A shower didn’t help his sour mood, nor did a glance at his watch that told him he’d missed breakfast. Cursing, he pulled on linen shorts and a T-shirt, then left the cabin to find the dining room with the hope of getting a snack.

He was soon lost on the vast ship. He hadn’t put on suntan lotion and the mid-morning sun was already hot enough to burn. Hot and perspiring, he cursed his way around the cruise liner, his bad temper growing and his stomach growling.

Whew… While this story was very well written and I loved the play between all of the characters… I have to say this was HOT.
The hilarity of the neighbors and their forwardness was a reall...

Share what you thought about The Captain's Man and earn reward points.