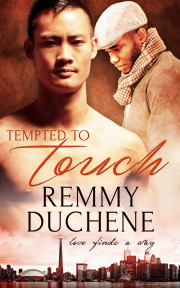 Luck, happenstance, whatever you call it… Love finds a way.

Clark James works hard. And though he’s not wealthy and he sometimes struggles to pay the bills, he’s happy. Though many see being gay as a burden, Clark knows it’s who he is and moves on. He has dreams to set in motion. When he helps an elderly woman who faints in the street, Tae Won Kim walks into Clark’s life.

When Tae Won Kim finds out about the man who saved his mother, he knows he must reward him. But the infuriating Clark James refuses to take anything from him. The more he pushes, the more he sees Clark as a man he could really bring into his life. Clark is kind, sexy and loving, but hell-bent on keeping Tae at arm’s length.

Clark danced around the other servers and set the empty plates on the pile to be washed. The morning had been unusually busy and he couldn’t quite understand why. Strange, since it didn’t mean more tips for him. He could tell by the weight of his apron pocket that he hadn’t made that much. They didn’t depend solely on tips—one upside to serving people junk food in this particular restaurant. His boss was a wealthy man, owning over thirty different locations, but thankfully he wasn’t a stingy man.

After settling a bill, Clark headed back to the tables and was in the process of restocking them when he noticed people were swarming to the window. A few had their cell phones out and were recording while they chatted excitedly among themselves.

Nosy, Clark eased his way through the people, peered out through the glass and almost fell over. There was an old woman on the ground, legs and arms flailing like a ladybug that had fallen over. Disgusted at everyone else, Clark shoved through them and darted outside. He slipped to his knees beside the woman and looked around her to make sure there wasn’t anything on the ground to hurt him before leaning over her.

“Can you hear me?” Clark asked.

“Do you have any pain? Does it hurt anywhere?”

He pulled out his cell and called nine-one-one. After he explained the issue and told them to hurry, he hung up and sat on the ground with her. She clutched his hand.

“What’s your name?” Clark asked. He didn’t want to pry, but, to keep her from panicking, he would use everything he could.

The woman turned kind yet tired eyes to him. “Rae Ji Kim,” she replied. “I was out running errands when my hip gave out. Someone needs to call my son.”

“If you give me his number, I’ll call him as soon as you’re okay with the paramedics.”

“Cell phone is in my pocket.”

He grabbed the phone just as sirens sounded in the distance. Clark looked up then to see a crowd had gathered around them. He frowned. He still couldn’t believe the nerve of these people. Someone had gotten hurt and instead of helping, they stood aside taking pictures like a bunch of assholes.

Remmy Duchene is a new-to-me author, and I found the writing style to be fluid and easy to read...Highly recommend to MM romance fans who don't mind insta-love, don't want a complicated plot and a ton...

I loved Clark from the get go...For someone who started off as enemies, Clark and Tae found their niche and made their HEA. A hit, not a miss.

Share what you thought about Tempted to Touch and earn reward points.