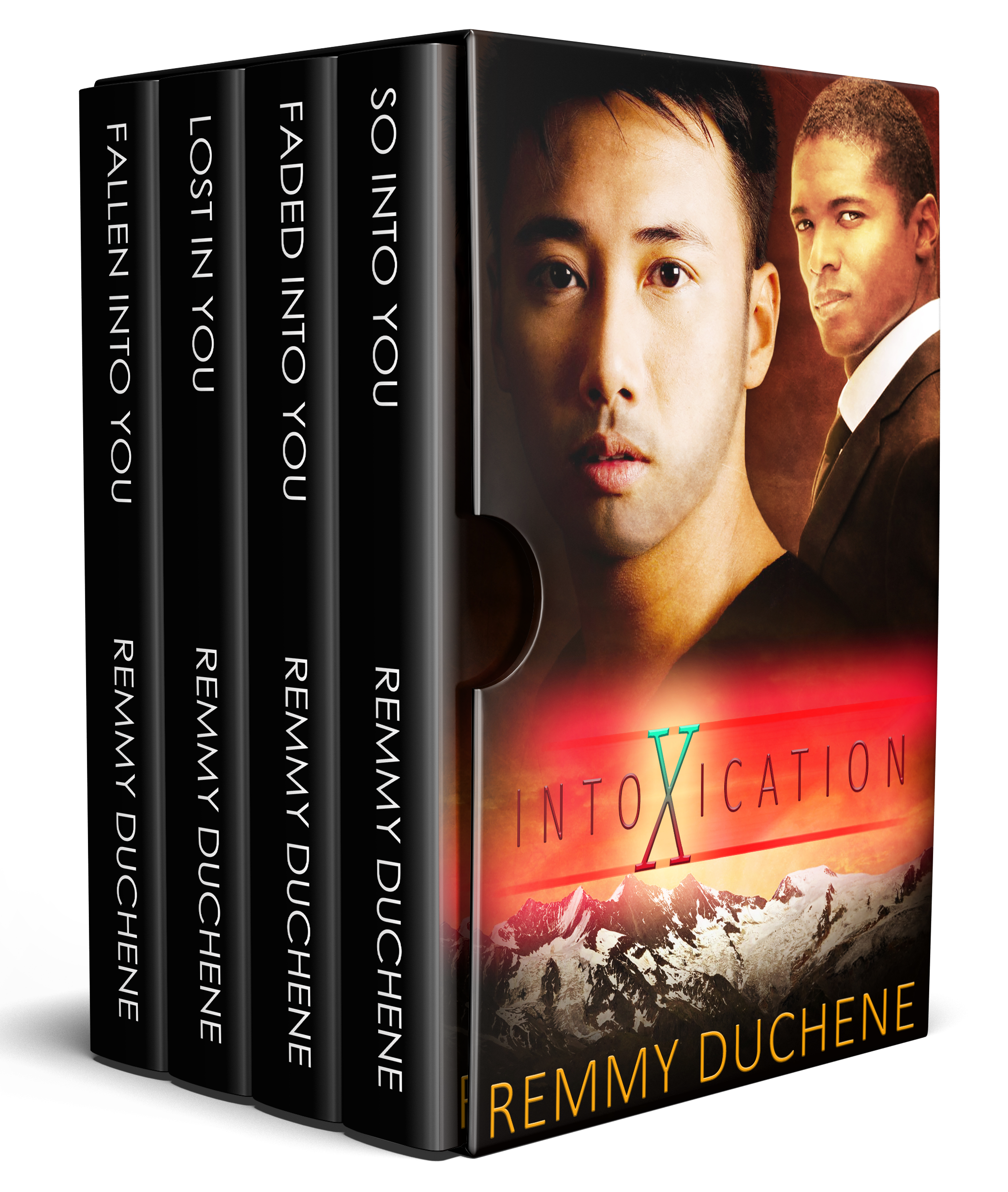 From Lust to Love in its purest form…

Alfred Leung’s life is in the crapper. From his gold-digging, racist mother and a cheating ex-boyfriend to his hang-ups about sex—everything in his existence depresses him. Add to it passing his days serving faux French food in a diner. It isn’t how he planned on spending the rest of his life, so the fates have definitely conspired against him. Just out of a relationship, he decides to focus on work and going back to one of the things that makes him happy—photography. Then, in his Armani suit, Darius Stark walks through the door of the diner, and Alfred’s world is about go into a tail spin he never saw coming.

Darius Stark hasn’t been with a man in years. Men see the suit and run screaming in the other direction or they tear-ass toward him because they see dollar signs. He decides to focus on his business, but soon he’s buried himself so deeply in his work that years goes by without someone to love. Finally, he sees Alfred and wants him, but Darius is about to find out not everyone thinks he’s almighty and that some men are flawed.

Ravinder Raja never saw himself as a jealous person, but when his best friend, Alfred, begins preparations to get married, Ravinder can’t help feeling alone. While kicking his best-man duties into high gear, he finds a job in India working as the PR rep for a wounded security company. He just wants to get away from all things ‘wedding’ until he has to face the music. He never expected Thaddeus Masterson and the way Ravinder’s body betrays him when it comes to the sexy ex-hacker.

When he was younger, Thaddeus Masterson got into some serious trouble. But now, reformed and fresh from working with the FBI, he’s decided to go back into business for himself—legally. When a friend’s company is brought to its knees by hackers, Thaddeus packs his stuff and jets off to India. It’s the last place he expects to find love. But, as they say, love always finds a way.

Lust is better together.

Although Jackson Stark wanted to get into dancing full time, he promised his father and Uncle Darius Stark that he would go to university first. After fast-tracking through his program while auditioning for small roles, he gets a job working at Darius’ video game company as a game designer. When Jackson gets the chance to be the face of a men’s line, he sees it as something else to add to his resume. Then he meets his boss, Ko, and everything he’s heard about love turns out to be true—it’s a giant pain in the ass.

Ko Takao never saw himself as a business mogul. After his father’s death, Ko inherits Hansamu, a clothing company that caters to the man who loves looking dashing. From handmade suits to loungewear, they are at the top of their game and Ko is looking to keep it that way by finding the perfect face to front the label. When Thaddeus suggests Jackson Stark, Ko can’t imagine it—then he lays eyes on the young stud again and all his reservations, along with his self-control, go right out of the window.

Lust is just the beginning…

Growing up, Mathias Jago’s life was not a walk in the park. All he knows comes from the streets, so it was no surprise he wound up taking his clothes off for a living. Mathias settles into his life of regret and twenty-dollar bills sliding into his underthings.

When Abhay Chetan walks into the Thornless Rose he takes Mathias’ breath away. But that is just a momentary lapse in judgment…right?

Abhay Chetan, tech guru, is all work and no play. Besides, the last time he’d gotten involved with anything to do with his sexuality, he’d been disowned. Love is not on his radar. Then his friends talk him into a night out at a gentleman’s club and he goes more to shut them up than anything else. As the night wears on, Abhay is bored out of his mind until ‘The Gentleman’ is announced and Abhay cannot keep his eyes off the stallion in the dark suit. When two days later he’s still thinking about ‘The Gentleman’, Abhay figures he can either do something about it or let it drive him crazy.

The city of Bathsheba was nestled between two lush mountains which both stunned Alfred and filled him with pride. There was just something about watching the snow cover them during the winter then, as if by magic, seeing them bloom green in the summer. Every turn of season, those high peaks took his breath away, and he’d stopped trying to figure out why years prior.

But with its beauty came the outside world, barreling into the medium-sized town, making it feel from time to time that it would burst at the seams. In the summertime, Bathsheba was always crawling with tourists who spent their every moment hiking up these beautiful slopes. In the wintertime came the skiers, the snowboarders and the photographers. Even with its precarious location, Bathsheba was booming with a lavish economy with its fair share of ups and downs.

The sun stood prominently in the sky, warming Alfred Leung to the very core. He couldn’t help a surge of happiness that he even hummed along with Taemin, who blared into his ears through his headset.

It was the kind of day that not even visiting his mother or going to work could ruin for him. Not even finding his boyfriend, the man he’d seriously been thinking of asking for his hand in marriage, balls-deep in another man could tarnish it. Alfred parked across the street from his mother’s house, fed the meter and glanced both ways before jogging across the road. The security guard didn’t give him any hassle about I.D. since Alfred was there on a regular basis.

“You are a sucker for punishment, aren’t you?” the guard asked. “That woman would have given me a stroke by now.”

Alfred bumped fists with him. “Yeah. But what can I do? She’s my mother and no matter how crazy she makes me…well…she’s my mother.”

The guard laughed and Alfred stepped into the elevator. All the way up, Alfred wondered the same thing the guard had asked him. His mother wasn’t easy to get along with on the best of days, but when he came out, she hadn’t thrown him off the balcony. Sure, she’d been disappointed and had needed some time to come to grips with the possibility of never having a grandchild, but she’d come around. That was something—that was a light in an otherwise dark tunnel. The elevator pinged and the doors parted. Before stepping out, he took a few cleansing breaths then hurried along the corridor to her apartment. He didn’t bother knocking since he had a key. Alfred let himself into the unit.

Alfred removed his shoes, set them to the side on the mat and made his way into the kitchen, where his mother was busy stirring a large pot. “Hi, Mom. What’re you cooking?”

“Not sure yet. Somethin’ missing.”

He peered into the pot and noticed it was soup—at least he thought it was soup. She glanced at him and he kissed her head. “How are you, Mom?” Alfred spoke in English because he wanted to force her to use the language. Even if she did reply in Cantonese, at least she would be hearing English.

She wiggled her wrist at him then dumped some pepper into her pot and stirred.

Mei-Ling tilted her head and gazed at him. “Him broke you or you broke him?”

Alfred didn’t bother correcting her grammar or perception of what he’d just said. He explained it all to her. She merely dropped the spoon on the counter and darted around him to a cupboard.

Alfred stood before her and shook his head. He couldn’t believe what she was asking him to do. Any other mom would be running to grab a frying pan from the kitchen to beat his ex into oblivion, but not his mother. She wanted him to stay with the lying, cheating, sorry excuse of a man because he was wealthy and had a good name—and he was Chinese.

“Sorry, Mama,” Alfred said in Cantonese, his voice shaking. “I’m your son. You’re supposed to want better for me.”

“I do want better for you,” she replied. “Bo is wealthy, come from good family, has education—you can’t do better than him.”

Her broken English annoyed him. Mei-Ling had been in the country long enough to be able to speak properly, but she refused to even try. “He slept with someone else, Mama.”

“Your father sleep with others. I stay with him.”

Share what you thought about Intoxication: A Box Set and earn reward points.