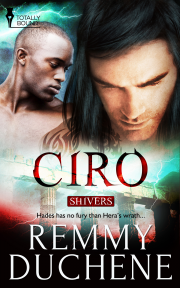 Book 1 in the Shivers series

Ciro is the son of Zeus and the goddess of the Storm Winds. He must stop his crazy, cursed brothers from destroying Earth, but most importantly from destroying the man he loves.

Ciro Pyktis was born with a target on his back, thanks to his father Zeus’ infidelity. Tired of her husband’s man-whoring ways, Hera cursed his latest offspring born outside their marriage to become Shivers. Somehow, Ciro was born a good Shiver, but a few of his brothers are hellbent on destroying him and the humans.

Finally, Ciro finds the man of his dreams and he should be happy, but now, not only does he have to protect all of Earth and Olympus from his brothers, he must also keep Carter Olabasu safe from the evil Ciro knows is coming.

Carter Olabasu has everything—his brother finally accepts his homosexuality, Carter has a thriving architecture business and the freedom to do what he wants when he wants. But he’s lonely. A chance meeting at a nightclub brings him into Ciro’s path. Almost instantly, he’s obsessed by a need that he’s never felt before—one for Ciro. However, when the world starts falling apart around him, Carter will have to face the fact that his new man isn’t who Carter thinks he is, and there are things that go bump in the night humans can never, ever find out about.

Ciro sat before his mother in the Hall of Winds and tilted his head. She grinned at him and patted her hair gently.

“Do you like it?” she questioned. “I thought I should change it up a bit after so many years.”

He smiled. “It is very becoming, Mother,” he replied, reaching over to touch her hand gently. “I truly like it.”

“And yet you seem unhappy.”

“I am.” He couldn’t hide anything from her. Though her wrath could be devastating to anyone who tested her, Thýella was a loving mother. Perhaps she was too kind, for now most of her children ran amok among the very people she cherished so dearly. “There is something unpleasant I wish to speak with you about.”

“In the coming days, I will have to hunt more of my brothers,” Ciro began, swallowing a lump rising in his throat. “They have posed unnecessary risk to Terra. Gaia is not pleased and has tasked me in setting my brothers straight. But you and I both know they would rather die than be kind to humans. What should I do?”

“You know what must be done, Ciro. You are the eldest.”

“Mother—they will not stop with just a mere defeat. It has been proven repeatedly in the past. They keep right on coming.”

“Then they must die…” Thýella lifted her head, elongating her neck, a stern look filling her eyes. “They are my children, and though I love them fiercely, they have disappointed me so desperately. I cannot deal with Gaia’s wrath. And she would be right in being angry and seeking retribution for their damage.”

“Ciro!” The second eldest ran into the room. “We have trouble.”

Ciro’s heart broke. He gritted his teeth and stood. “I was hoping to reason with him but the more I think about it, the more I know that will never work.”

“You cannot reason with a mad man,” Koi said sternly. “You were the one who taught me that, brother.”

Ciro nodded, gave himself a moment to pull himself together then offered his mother a sorrowful look. “I must go, Mother.”

“I will come with you,” Koi told him. “Two is always better than being alone.”

“No,” Ciro said. “Stay here with Mother. If he gets past me, he may show up here. I need someone I trust to protect her.”

“I assure you I can protect myself.” Thýella raised her chin.

Koi continued as if Thýella hadn’t spoken. “You trust me?” he asked in a soft voice.

He touched Koi’s cheek then patted it. “We will talk later. Please stay here.”

Koi did not look impressed, and after pressing his lips into a thin line, he nodded stiffly.

Accepting a kiss to his cheek from his mother, Ciro took a moment to breathe. With a final look at Thýella, he exited the luxurious room and began his descent to Earth.

Once he landed, Ciro knew something was about to happen. There wasn’t much time to look around and take stock of anything, or even call for assistance. Usually, he had a little leeway to get Ares, Adrestia and Hygeia to help him clear cities and towns. In this instance, he had no such luxury.

Ciro bent his knees, digging his feet into the ground just before pushing upward. He flew through the air with his arms by his sides and his chest mere inches away from the tall structure before him. He climbed higher, up the side of the tallest building in the city bordered by two small towns. Darkness swarmed above, as though Hades had risen and tossed a blanket over everything.

He felt it then—the charge of lightning flashing from his eyes caused by the stench of evil carried on the wind. The breeze howled, surging from the north, and Ciro knew it was going to be bad if he didn’t figure out what to do—and fast. With his coat flopping behind him in the breeze, Ciro stood atop the one-hundred-and-eighty-story building. He tried figuring out where the attack would come from. Tracking had not been easy. When he was led to one of the small towns in the east, it almost broke his heart. The town was quiet, lovely, perfect.

Children ran along the streets calling to one another. A little boy kicked a ball so hard it flew over a fence, hitting an old man on the side of the head. The man only laughed and handed the ball back.

A couple of dogs chased each other down a back road, barking happily at their game. Lovers lay on towels and blankets on what the locals called the beach, which was merely a lake with a sandy shore.

On the far side, workers had used heavy equipment to pile large rocks into the water so people could sit on them to watch the sunset. Ciro knew if something was to happen there, the place would be devastated. The citizens would lose everything and the town would be wiped off the map. In order to stop it, the only idea he could see was to lead his prey away from the perfection he now watched to somewhere larger, to somewhere he would have more room to navigate and stop the attack.

Something pulled Ciro from his thoughts, snapping his head upward. Though it was dark, a scent filled the air that he instantly recognized—danger. Suddenly, it was there before him. He saw it the moment the funnel shape started forming. Pressing his thumb and forefinger of his right hand together, he then dragged his thumb down his index finger. A white streak of lightning followed his thumb while he frowned. He shoved his left hand out, sending a ball of lightning from his palm that disappeared within the funnel. A growl of pain followed, but it didn’t stop the turmoil.

Ciro made a face then looked down. Below him, he discerned the panic. People were running, trying desperately to get out of the way. But the funnel cloud simply grew bigger. The larger it got, the more fear Ciro detected from the crowd beneath him, making him slightly ill. He tried shocking it a second time, which only slowed it before it sped up again.

That was precisely what his foe wanted—to see the humans running around, scattering like headless chickens in their fright. Gala fed from their misery, which made no sense since he was not a god of pain. He wasn’t even a god, but a tributary of one. Ciro was instantly sick and disappointed. His brothers were powerful beings but they were weak from their cruelty. Gala didn’t care how harming the humans made his mother feel. Ciro knew that for certain.

“That is not how it is and you know it.”

“And how do I know that, Ciro? Whenever something goes wrong, she sends you—as if you are god and creator of us all.”

An equal balance of action, suspense, romance and intrigue, Ciro is only the beginning of the journey for this odd couple. If you are a fan of mythology, then...

I enjoyed how Ms. Duchene has actually added to story of the Olympians by including a new branch in the mix. It is difficult to add something to two millennia of storytelling but the author sh...

Share what you thought about Ciro and earn reward points.

When I first wrote a story about a Japanese ex-Marine falling for an African American businessman, it was rejected by the first publisher I sent it to. Not because it was a horrible story, they loved the story. They just didn’t think a Japanese man would ever fall for an African American because apparently the Japanese see African Americans as “dirty.” To say I was mortified would be an understatement but I was more disappointed than anything else. I mean, I could not understand why they didn’t love my cultural blend as much as I did.

• Autumn Lover by . This was the first romance novel given to me by a friend after I moved to Canada and I absolutely got lost within the pages. It was a remarkable read.