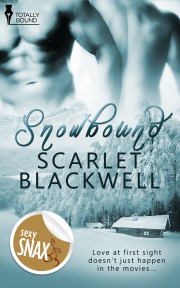 Love at first sight doesn’t just happen in the movies...

Winter in the most inhospitable of environments. Lost in a small South Dakota town during a snow storm, Hayden Berry is rescued by Deputy Sheriff Dylan Hubble after crashing his car. The attraction between the two men is instant. Dylan takes him to spend the night at his own house. One night turns into two when they are snowed in and something blossoms between them.

Something that can’t possibly happen because Hayden isn’t free to be with Dylan. But love at first sight doesn’t just happen in the movies and Hayden’s feelings for Dylan cast a shadow over the rest of his life...

The car was toasty warm. Winter tyres on the front, chains on the back, bumping steadily against flattened snow. The rhythmic clacking of the windscreen wipers started to have a numbing effect. Hayden Berry felt himself start to drift. He forced his eyes open, seeing nothing but the glow of the moon illuminating five-foot-high drifts of snow piled along the sides of the road.

He hadn’t noticed a sign and was pretty sure he was lost in some hick town somewhere in South Dakota. This had been a bad idea. Why exactly was he driving across state in the middle of February? All he wanted was to find the border and head back home, but the snow flurries coming down were starting to make driving conditions hazardous. It was ten p.m. His was the only car on the road. He was the only one not tucked up in bed. Perhaps he should find a motel and pull over before he ended up in a ditch.

A loud bang made him yell and curse in fright. He fought the wheel as he lost control of the car, careering into the centre of the road, trying his hardest to turn it into the skid. He braked and felt a crunch under his jabbing foot as the brakes locked, doing nothing to slow his momentum, but he got the car back over to the right side of the road. His vehicle kept going all the way. He ploughed into a stone wall. Hayden was thrown forward—cracking his forehead on the wheel—then back, restrained by his seat belt. He sat there stunned and groaning a moment in the snow-blanketed silence.

Gradually he recovered his senses. His head wasn’t bleeding. It just had a lump but there was blood in his mouth—he must have bitten his tongue. The engine was still running. It gave him hope the car might still be drivable, at least to a motel, but what was the loud noise that had made him lose control in the first place?

He unfastened his seat belt, zipped up his parka and pulled the hood up before he slid cautiously out of the car on unsteady legs. The cold hit him in the face like he’d stepped into a freezer. The wind dashed stinging ice crystals against his skin. By the time he’d assessed the damage to the front—a dented hood, could have been worse—and walked around the back of the car, his face was numb.

He stood looking down in dismay. The left rear tyre was completely shredded. Oh fuck, now what? He glanced around. He was in the middle of nowhere. No houses, no stores, no lights of any kind save the moon shining over the lonely road. It might be miles to the nearest house. He would die of hypothermia before he got there.

He slid back into the car, shivering violently, his teeth chattering. The engine still circulated heat and he held his frozen hands up to the blowers, grunting at the pain of defrosting. He tried not to let panic overwhelm him. He would call nine one one, it was simple. He reached behind the passenger seat, scrabbling blindly in the front pocket of his bag before he located his cell. He flipped it open and stared down in disbelief as the screen remained dark. The battery had gone.

Great. Just fucking great. He swore, hurling the cell behind him. What an idiot he was. Crossing this sort of terrain with no contingency plans, without even charging his phone first—what sort of a prick was he?

He glanced at the temperature gauge next to the CD player. Minus thirteen. Just peachy.

He sat staring through the window into the darkness. He was going to have to walk. He couldn’t sit here all night with the engine running and he couldn’t stop it or he’d freeze to death. He had an extra sweater in his bag he could put on under his parka, and hat, scarf and gloves on the back seat. He made no move to get ready. At that moment he would rather have stuck pins in his eyes than go out into that cruel weather once more.

Suddenly he saw a light in the distance. He strained his eyes, trying to work out if it was headlights and if they were getting closer. Yes and yes! He flung the door open, almost falling into the snow in his haste to get out. He pulled his right leg behind him. It had gone to sleep on him, and never worked well at the best of times.

Hayden stumbled into the centre of the road, waving his arms violently. The freezing air burning into his lungs caused him to cough.

The twin points of light came closer and he saw the red and blue bars on top of the vehicle, not currently illuminated. Oh God, it was a cop. Hayden could have fallen to his knees in worship.

The cruiser slowed down. It drove past and as Hayden turned around, dumbstruck, thinking the guy had not seen him in the blizzard, it made a U-turn and pulled up behind his stricken car.

Share what you thought about Snowbound and earn reward points.