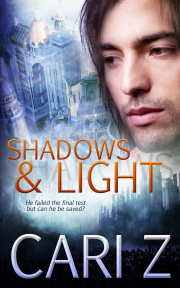 A fight to the death against his former master turns into a chance for Rafael, an assassin denied the immortality he lived to achieve, to learn the shocking truth about the fate he was spared.

Rafael wanted nothing more than to serve his immortal master, Xian, a High One of Clare, who taught him from an early age how to be an assassin. But after failing the final test, Rafael was turned out into the Lower City, abandoned by the one person he thought he could count on.

Years of hatred and thoughts of revenge have fueled Rafael’s quest for vengeance, but when the time comes to strike at Xian, he hesitates and is taken prisoner. Rafael expects to die, either at Xian’s hand or at the hand of Myrtea, his sadistic mistress.

Instead Xian heals him, spares him a brutal interrogation and tells him the dark truth driving the ruthlessness of the High Ones—the source of their immortality is spent. Soon the city will devolve into chaos as High Ones battle one another and the rebelling denizens of the Lower City for power and resources. Xian wants to spare Rafael that pain, just as he spared him the pain of becoming a High One a decade earlier.

Their only chance for survival is to escape Clare before civil war breaks out. Even if they make it out of the city, though, there’s no guarantee that Xian will live through the agonizing process of becoming human again. The only ones they can rely on are each other…if Rafael can bring himself to once again trust his former master, the only man he’s ever loved.

Reader Advisory: This book contains mentions of blood-drinking, blood magic, blood-play, knife-play, addiction and withdrawal, as well as flogging and whipping. This book also refers to pain and blood-play as coping mechanisms.

Rafael stalked the High One through the misted streets of Clare, the Bright City, though not so bright now as night laid claim to her. He had been watching this High One for two weeks, following him and learning his ways. The creature was skilled and confident, otherwise he wouldn’t have come into the Lower Half without a cadre of guards. He was too confident for his own good. Rafael felt nothing inside himself except savage satisfaction when he considered what he was about to do. The murder of a High One was a serious undertaking and, of all the assassins of the Lower Half, he was the only one to have succeeded. Time and again he had succeeded. Tonight would be no different.

They left the last of the inns behind, heading toward the wharves on the outskirts of the vast island city. Going to check the shipments of whatever elder he served, Rafael knew. This one was a warrior, a challenge. He moved with ease and carried the rapier at his side with the air of a practiced killer. Rafael had watched him fight, watched him kill. A decided challenge, but he relished it. The streets leading to the wharves would be inhabited with nothing but drunks and whores at this time of night, and they knew better than to interfere in business beyond their concern, which this was about to become. Rafael moved noiselessly along the rooftops, closing on his target. Closer, closer… He judged the distance and leaped suddenly, no flash of shadow or flare of light to give him away. Yet somehow the High One still sensed him.

It was the last possible moment the man could have dodged the savage kick, and he didn’t get away completely. Rafael’s foot caught his shoulder but not his spine and the High One spun to the side, favoring the injury but drawing his sword lightning fast as he turned back to his attacker. Rafael was impressed. A blow to the spine would have incapacitated the creature long enough for him to pierce his heart or remove his head, but the shoulder would only distract him for as long as it took to heal. Rafael moved fast to keep up his offensive, his slender sabers slicing through the long metallic cloak that hid the upper half of his target’s visage. He had intended to cut the High One’s face, perhaps blind him, but the creature truly was talented, or lucky. Rafael’s blades grazed one cheek and severed the leather thong holding the cloak back. It fell shimmering to the ground, exposing his target’s face.

It was the same as all the other High Ones’ faces. The change the magic wrought on them gave them invulnerability to the ravages of time but leached the uniqueness out of their flesh, rendering them all the same sickly pale color, incandescent in the dim orange flare of torchlight. His face was slender, as so many were, and unremarkable in its beautiful normalcy. His eyes were nearly white, pupils the only break in the viscera’s pallor, and his hair was the same glittering silver as the cape that lay crumpled at his feet.

The only difference with this High One was his competency with the blade. Even as he dodged Rafael’s sabers, his own rapier flicked out, almost invisible in the faint light, seeking to impale. Rafael rolled forward, unable to stop his momentum but wanting to continue to press, and barely missed the wickedly fast point as he flew beneath it. He levered a cut at the High One’s legs but the creature leaped into the air and slightly back, recovering his space and avoiding the cut at the same time. Rafael’s eyes narrowed. Challenging indeed. He struck again, pressing the High One back. It took all his skill to keep his two blades in play. The High One was smart and switched his target from Rafael’s body to his hands, trying to disarm him.

This was taking too long. Soon the creature’s shoulder would recover and he’d be on the receiving end. Rafael was fast and very skilled, but High Ones had advantages of magically enhanced strength and speed and the weight of lifetimes of practice. Surprise had to be on his side for the fight to end fast, and his endurance wouldn’t keep him up forever. He’d have to take some chances. Thrusting his right blade at the High One’s face, he dropped his guard on the left side. The rapier came out, pricking, seeking him, but too slow. He had distracted the creature with his first strike and now swept his saber across the man’s thigh, biting easily into flesh and muscle.

It was a pyrrhic victory. The High One recovered and rerouted his own blade down. The point plunged deeply into Rafael’s left hand, sliding between thumb and forefinger. He gasped and jerked it back, losing his second saber as he did so. The pain was excruciating but he had been trained to deal with that, even without the healing magic of a High One flowing through his blood. He dropped back and pulled his heavy-bladed athame from his belt.

They stood still for a moment, each surveying the other. Rafael grimaced internally—he could barely grip the athame. The High One was bleeding but, if he could continue to draw this fight out, he’d surely win. Rafael could outrun him, but he’d never run from a fight. There was no honor in abandoning his purpose. He existed to kill their kind. If he had to die trying, that was better than living with the memory of failure.

The High One flicked his eyes toward the knife. They narrowed minutely, and he looked back at Rafael with grim curiosity. “How does a low-born cur such as you handle the athame of a master?”

For a short book it’s packed with action and romance, from the first pages where Rafael works for the dastardly Daeva, a proper bad guy, to the end. And because of this I was worried that the chara...

Cari Z is a new to me author……and I can’t explain why. How have I missed this?! I feel like I live under a rock right now. I feel betrayed by my reader friends. Why has no one recommended Cari...

Share what you thought about Shadows and Light and earn reward points.