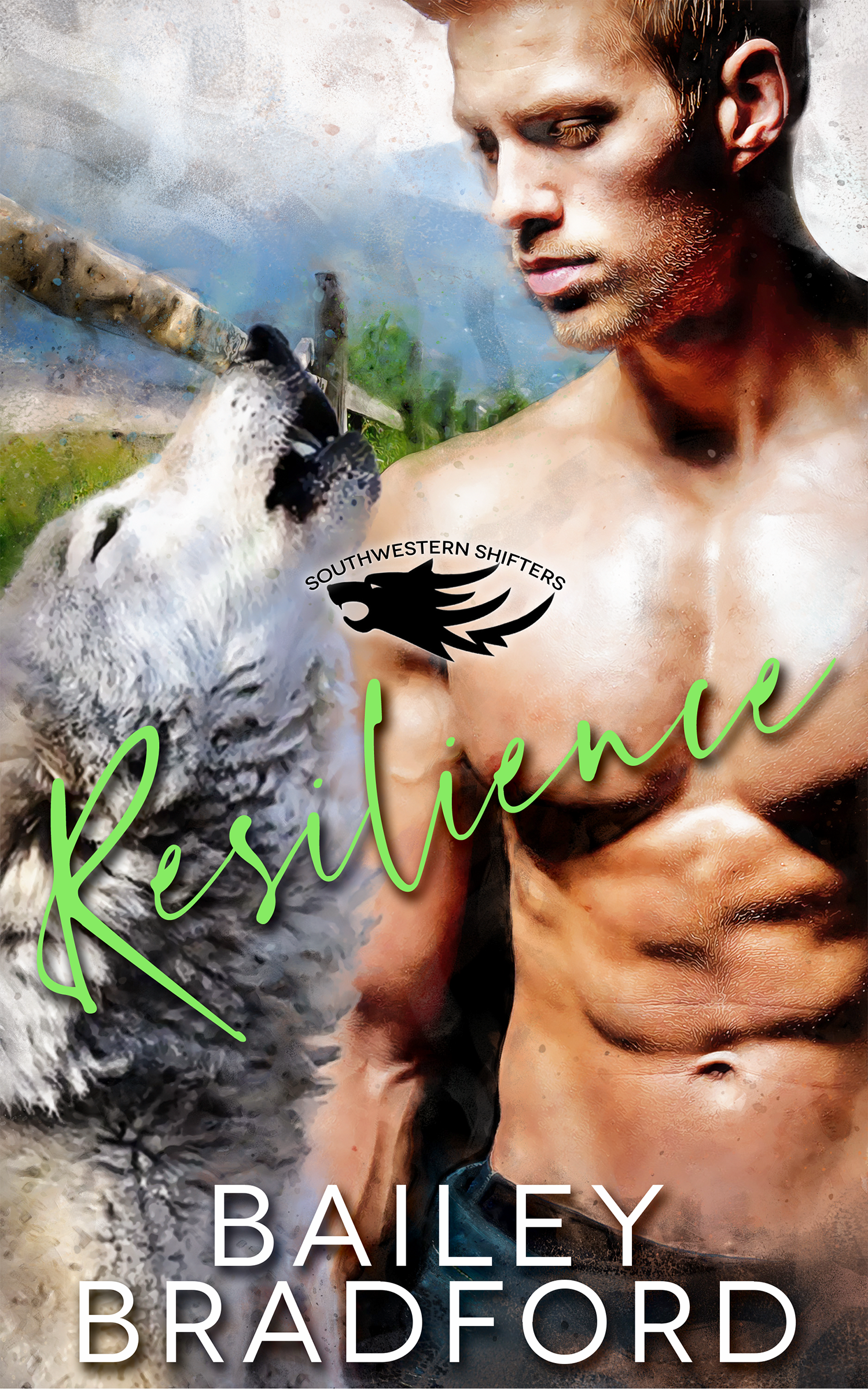 Book 5 in the Southwestern Shifters series

Todd Benson almost died for the freedom to love Adam Soames. Now they face obstacles that once again place both of them in danger.

Todd Benson had figured he'd be alone forever. He had the best friend any guy could want in Gabe Staley, and Gabe's partner Mika was okay, too. But a personal life and any kind of true happiness was out of the question. With Todd's bigoted and violent parents, and the Sheriff he worked for trying to torture animals and Gabe, Todd knew he'd do well just to survive his job as a deputy in the small town of Shasta, Texas.

Adam Soames needed to get away from the big city. His best friend had found his perfect man and moved away, and Adam felt lost in the city. The opportunity to have his own veterinary practice in a small town sounded perfect. He didn't know he'd soon be living a life he'd only dreamed of—or the cost he and the man he loved would have to pay. Together Todd and Adam face seemingly insurmountable odds, from Todd's recovery from a vicious attack to the prejudices and trials many couples have. Then there's the big shocker of finding out Gabe and Mika aren't humans, exactly, but wolf shifters instead, and a whole new door is opened and trouble soon comes barrelling through it.

Todd Benson couldn’t begin to count the number of times he’d thought he was going to die. Probably, he guessed, every time his hell and brimstone preaching daddy had grabbed a belt, or a cane, or a switch. There’d been those two times with the crop, and another with the electrical cord. Those were just the times he remembered. Sometimes he wondered if he hadn’t blocked out even worse episodes of abuse.

But he’d survived the abuse, no thanks to most people in the small town of Shasta. As an adult, Todd knew now that everyone just about had to have been aware of what was happening to him when he’d been a kid. And as a member of law enforcement, a certified, bonafide deputy, Todd knew they knew.

Forgiving the people of Shasta for turning a blind eye to the abuse he’d suffered was something he was still working on. The only people who’d really tried to help him had been Mr and Mrs Staley, his best friend’s grandparents. That hadn’t really gone so well, but it had helped Todd, knowing there were people who didn’t think he deserved to be treated so badly. When they’d died, Todd had cried like a baby. Gabe, their grandson and his closest friend, had been devastated as well.

And somehow, Todd had developed more of a backbone then. His father and mother had already condemned him to hell for being friends with Gabe since Gabe was one of those demon possessed homosexuals. Well, Todd had news for his parents, he was too. He was just too scared to do anything about it. He was too scared to even talk about it, because if his parents found out? All those times he’d thought he was gonna die, well, those would be nothing compared to what would happen.

Todd had heard his parents rant before, and he’d been subjected to some severe beatings over being Gabe’s friend even once he’d passed the age of eighteen. It was, Todd knew even though it shamed him, very hard to break out of the cycle of abuse. He still hadn’t, he supposed, because it’d just been earlier in the day that his father had slapped him so hard Todd’s entire head throbbed. And here he’d been wearing his badge and...and he hadn’t done more than hang his head and leave.

At least he’d made his father stop hitting him otherwise, and he’d moved out. Those were two accomplishments, and Todd was intelligent enough to know he needed to give himself what positive reinforcement he could. His confidence was almost non-existent and he had plenty of other problems, but he had to believe he’d get better. Maybe one day he’d move away from Shasta, because he’d need to get away from his parents if he ever wanted to be able to be himself.

But first he’d have to figure out who he was. That was just frightening, because Todd knew that despite the badge on his shirt, he was a big old coward. If he wasn’t, he’d be out like Gabe, and he sure wouldn’t let anyone smack him around.

"Get off your lazy ass and go find out about the new vet that’s moving in to the Duggart place."

Todd looked up from the papers on his desk. How long had he been sitting there staring blankly at them? Long enough for Sheriff Kaufman to catch him at it. Kaufman was only mildly better to Todd than his parents were.

"New vet?" Todd said, and if he stuttered a little, oh well, Kaufman tended to scare him. The man was cruel on a whole different level than Todd’s parents were. At least even they didn’t get their rocks off abusing and shooting stray dogs. Kaufman was a sociopath with a badge as far as Todd was concerned, and that was a combination that should terrify everyone, not just him.

Kaufman snorted and kicked Todd’s desk. "Yeah, now get your lazy ass up and go check him out. I think he looks too pretty not to be one of those fags. We already got that Staley freak here, at least until I can run his fruity ass out of Shasta. Don’t need no more of ‘em around."

Todd bit his tongue to keep from pointing out that Gabe didn’t actually live in the town of Shasta, but on the outskirts. He pushed away from the desk and grabbed his jacket and hat. Better that he not say anything to draw more attention to Gabe. Soon enough Sheriff Kaufman would catch on to what he was doing, and probably to the fact that Todd was helping him. Together, Todd and Gabe had set about rescuing the stray dogs around the area. It was as close as Todd had come to making a stand, but he couldn’t live with himself if he sat back while Kaufman tortured some of the most noble creatures on Earth.

So Todd tried to make sure he got the calls about strays, and he and Gabe would sneak out and rescue them. Sometimes Kaufman got the info first, though, and those times were just awful. Todd had ended up puking for a good couple hours after the last time.

Sheriff Kaufman stopped him with a hand on his shoulder. Todd couldn’t quite look into the man’s squinty little eyes. "You tell me if he’s a faggot, or an asshole who’s gonna shit bricks over our stray policy. I’ll handle him from there." He slapped Todd’s arm hard enough to bruise. "A few tickets and a little roughin’ up and I bet he’d run off cryin’."

Todd waited until he was outside to shake his head. It was like an epic battle between good and evil or something, except the Bible had it wrong, because the devil couldn’t be as hateful and cruel as people were, could he? Sometimes—a lot of times—Todd thought Hell was right here on Earth, and the little town of Shasta was at its epicenter.

He didn’t have time for philosophical bullshit though. Right now he had to go warn the good veterinarian about the evil sheriff. Yep, good and evil, Todd thought, and smiled for the first time that day. Now, if the vet turned out to be a total douche, that’d skew Todd’s budding philosophy on religion and God and all that. Todd didn’t even worry about being sacrilegious any more. His father had beat it into him that God knew what was in one’s heart, and if that was the case, and what Todd felt and thought secretly in his heart was wrong, then he was toast anyway.

But, if his father was wrong and God wasn’t the hateful being his father thought he was, then Todd figured he was going to be okay. His father and mother, on the other hand, were in for some hot weather in the afterlife.

Todd rolled his eyes at his thoughts. He spent too much time on stuff like that, but considering the way it’d been drilled into him all his life, he reckoned it was understandable. It wasn’t like he had friends other than Gabe to hang out with and distract him from his own stupid brain, either. Todd was, as weird as it might seem considering his job, so shy it hurt to talk sometimes. Plus, who could he trust in Shasta? No one, besides Gabe.

"I really need out of here," Todd mumbled, then nearly wrecked his cruiser when he rounded the corner of Main and Brentwood. As it was, he hit his brakes a little too hard and the tires screeched on the asphalt, and the man who was bent over digging through the back of his SUV stood up and turned around.

Finally Todd and Adams story. I was so excited I wouldn't put down the book till I was done reading it. Awesomely written and I awwed and felt all the emotions with the couple. Well done Ms Bradford!

I loved that we finally got to read about Adam and Todd. It answers so many of the question I had about them. A great read.

Share what you thought about Resilience and earn reward points.