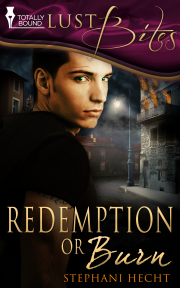 Max is determined to redeem his family name, even if he has to die to do it. Will the man he loves give Max a reason to live?

Even though they were only fifteen at the time, Max and Dev were on the brink of falling for each other. Then Max's father, the fire chief, committed a shameful act after which he was forced out of the field and the state.

Ten years later, Max is back and determined to redeem the family honour, no matter the cost. The last thing he expects to find out is that not only is Dev a part of Detroit Fire, but assigned to the same fire house as Max.

Will Dev be able to convince Max that it's not worth dying to save the family name, or will Max make the ultimate sacrifice in order to right his father's sins?

Max walked up to the door of Detroit Fire’s Engine 49 and steeled himself to enter. Although it was cold as hell outside and his gear bag was already beginning to strain his back, he still found himself terrified of the reception he would get. He recalled the last time he’d been there. It’d been nearly ten years ago, when he was fifteen. As usual, his best friend Dev had been by his side. They were visiting their fathers, who had been on duty for a couple of days. That had been the hours before the 'great disgrace'—the incident that made it so Dev’s father never came home, while Max’s father had come home with a ruined career. It had also been the one and only time Max had kissed Dev. Best friends since birth, Max had harboured a crush on Dev for years. So, when he’d found out that Dev liked him back, Max should have been elated. Instead he’d been shattered, because he’d known that he and Dev would never see each other again. Max shook off all those memories. He’d learnt long ago that it was a waste of time to dwell on what might have been. He had to deal with what the past had thrown his way and grow a thick skin. This was what he wanted to do for a living, and Max’d be dammed if he’d let his father or his shitty legacy stop that from happening. Since it was really getting cold and he knew it wasn’t smart to linger outside in the not-so-nice neighbourhood, Max reached out and opened the door. He could hear the other men in his new company, talking in the other room. But the thing that caught his attention the most was the wall in front of him. There were displayed all the fire chiefs from the past. The photos lined up in chronological order. But when it came to the years his father had served, there was a blank wall. Not that Max blamed them. After all, it was due to his father’s colossal fuck-up that eight firefighters had died. Yet, it still made his gut ache. For years, the Callisters had served the fire department—back to the time when Detroit Fire had been formed. Until his father, Max’s family had been known for being good at their jobs and were almost a legacy. It looked like that had changed. Taking a deep breath, Max made his way to the living quarters. As soon as he stepped into the room, the others glanced his way and a heavy silence filled the room. It was as if somebody had pushed a giant mute button and now couldn’t find the remote to turn it off. "Shit! We finally get a new body and it had to be this jerk," a short blond finally broke the spell. "Yeah, it would have been better to keep going one man short than to have a Callister at our side." This comment came from a tall dark-haired guy. "Come on, guys. Leave him alone. He’s not his father," a soft voice cut in. The tone sounded so familiar that Max sucked in a breath. He studied the guy, looking for any familiar features, but after ten years, he couldn’t be sure. "Dev, I can’t believe you’d even say that since your own dad died that day," returned the blond. A cold sweat broke out over Max’s body, but it didn’t have anything to do with the scathing comments. Those he’d been expecting. What he hadn’t anticipated was Dev.
Buy Now

a fast-paced short story...you need to buckle up to ride this speedy story...Great story...

Max and Dev lost contact when they were fifteen because Max father the fire chief, committed a shameful act and was forced out of the fire department. Now ten years later Max wants to redeem the family...

Share what you thought about Redemption or Burn and earn reward points.