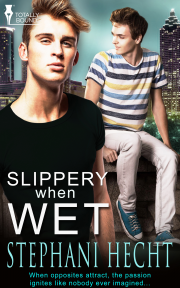 When opposites attract, the passion ignites like nobody ever imagined.

Ever since Reno started working as the head coordinator for the kids' centre at the hotel, he'd been harbouring a not-so-secret crush on a lifeguard named Bruce. When he finally has a chance to talk to Bruce and Bruce doesn't even know Reno's name, Reno is crushed. Heartbroken, Reno is forced to admit that beauty is only skin deep and that Bruce is a jerk.

Bruce finds himself intrigued by the shy, yet cute Reno. He decides that he is going to pursue the man. But Bruce has the reputation as a man-eater. Will his reputation ruin any chance he has with Reno? Or will he be able to convince Reno that he really does care for him?

He finally had the chance that he’d waited over six months for. Reno was going to have an excuse to talk to the man of his dreams, Bruce McCall. The man who had all the swagger of Jagger, the cool of Bond and the good looks of David Beckham.

It was really a shame that said man worked as a lifeguard at a hotel. But then again, for all David’s wonderfulness, Reno had to remind himself that David was just a normal, everyday guy. Besides, who was Reno to talk? He worked as the head coordinator for children’s activities at the same hotel. At least Bruce got to actually save lives. What did Reno do? He helped kids make macaroni necklaces and finger paint pictures to show off to their uncaring parents. So, as far as he was concerned, that put Bruce steps ahead of him.

Reno held his hand up to his mouth and huffed to make sure his breath didn’t stink, ran a nervous hand over his hair to smooth his cowlicks, brushed his fingers over his lips to guarantee he didn’t have any pieces of leftover dinner stuck to his face then checked his fly was all the way up. He wanted to be certain that he made a good impression. Taking a deep breath to steady his nerves, he pointed himself towards the pool area.

He found Bruce in his usual location on the fourth floor where the pool was located. He was sitting in the lifeguard chair, looking as gorgeous as ever. Reno paused a moment just to stare at him. With sleek, tan skin that covered a set of muscles to die for, dark, short hair and brown eyes that one could get lost in, he was every gay man’s wet dream come true and then some. That was before one threw in the cute set of dimples and the high cheekbones—they were just the bonus on the spank-bank cake of yumminess. And, damn it, Reno didn’t just want a big old slice of it. Hell, who was he kidding? He wanted the whole cake, icing and all.

It wasn’t until he’d been standing there for a good five minutes that Reno realised he was stalling. Not only that, but he was pretty sure he was doing a good impression of a stalker.

Taking in another deep breath, he said to himself, “Come on, stop being a wimp. You can do this. It’s not like he’s going to bite or anything. At the worst, he can just treat you like you’re nothing. Just like every other good looking guy in the world does. It won’t hurt—much.”

Making himself put one foot in front of the other, Reno closed the gap between himself and Bruce. His heart pounded harder the closer he got. His throat grew dry and his breathing became so fast it was a wonder that he didn’t hyperventilate. Before he knew it, he was there. Bruce barely glanced his way before returning his gaze to the water.

Yeah, just the way Reno wanted things to start off. He could already feel himself wanting to crawl into a hole and die.

“Is there something you needed?” Bruce asked in an almost bored tone.

“Yeah, we need to touch base on the group that’s coming in tomorrow,” Reno said, shuffling his feet nervously.

Wow, when had his voice become so high pitched? He sounded like Peter Brady from that old Brady Bunch episode. The one where they had the singing gig and Peter’s voice was going through the change. Only Reno didn’t have that excuse to fall back on since he’d gone through puberty a long time ago.

Oh, this is a great read. It was funny and a little bit serious when needed. I haven’t laughed so much as I did when I read this story.

The sex between them is so damn hot, you woul...

Share what you thought about Slippery When Wet and earn reward points.