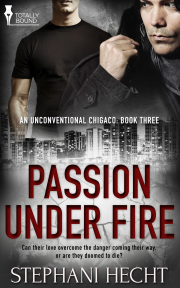 Can their love overcome the danger coming their way, or are they doomed to die?

Georgio is the third son in a powerful mob family, but he has never agreed with their violent or illegal ways, so he joins the resistance in an attempt to right the wrongs that his family has done. But, by doing so, he puts himself at great risk of getting caught. And if he is, his older brothers would have no problem ordering him executed, their sibling or not.

Tito is a runner for the family. While he hates the gang, he has a sick brother at home to take care of, so he has to take the job because it pays so well. The last thing Tito expects is to form an attachment to Georgio.

While Georgio tries to deny his feelings for Tito, he finds himself drawn to him as well. But, if they were to be caught together, they could be killed on the spot. Will their love be able to survive so many obstacles? Or can they find a way to happiness?

Smack! The sound of flesh hitting flesh reverberated through the large office. Georgio barely held back a wince as he watched one of his good friends and closest allies, Dirk, take another blow from one of his brothers’ enforcers. They had him on his knees right in front of Georgio’s brothers’ desks. They were both watching the show with cold smiles on their faces, their dark eyes intense as if they didn’t want to miss a moment of the action.

As it was, Dirk was already bleeding from his now crooked nose, he had a split lip and his eyes were beginning to swell. It wouldn’t take long before they expanded so much that Dirk wouldn’t be able to see at all.

Thud! This time the blow hit Dirk on the jaw and sent him reeling to the side. Were it not for the two men holding him up, Dirk would surely have fallen to the floor. Georgio gritted his teeth together as rage boiled through him. At the same time, he held tight onto the arms of his chair. If his brothers really knew how close he and Dirk were, then things could get even worse.

The funny thing was, while Dirk and Georgio were both gay, they were far from being a couple. Sure, they had fooled around a few times. Every encounter had been awkward and unfulfilling for the both of them. So in the end they had decided that they made much better friends than lovers. Still, if Georgio’s brothers were to catch wind of just how tight he and Dirk were, Georgio knew it would send them into a rage. They already suspected that Georgio was gay—this would be the fuel they needed to add to their great big gay fire. They were just looking for a way to confirm that Georgio was indeed gay. Then they would have a legitimate reason to off Georgio without pissing off the rest of the family members.

Whack! Yet another blow, this one hitting the side of Dirk’s jaw. His blue eyes rolled into the back of his head, but he somehow managed to stay conscious. More blood began to run, mixing in with his blond hair.

What was Dirk’s sin? The fucking irony of it all was that Dirk hadn’t done a damn thing. It had been Dirk’s youngest sister who had committed the transgression, and boy, was it a doozy. She had done something so dangerous that it had earned her a kill-on-sight order. She had joined the rebellion group that was determined to overthrow the gangs that ruled Chicago. But she was buried so far underground that the leaders of their gang, Georgio’s older twin brothers, couldn’t find her. They had decided to take out their frustration on the poor enforcer.

Georgio had to give big kudos to his friend—Dirk was taking the beating like a man. While he let out an occasional grunt, he never cried out. He never begged for mercy either. But that was Dirk, he was as stubborn as a mule and he would never give Michael or Luciano that satisfaction. He hated Georgio’s brothers just as much as Georgio did. The only reason he worked for the twins was because it had kept his family safe…until now. That had all changed. Dirk would still be forced to work for the twins because Georgio knew that they would want to keep close tabs on him. Meanwhile, the rest of his family would be in trouble as well. Any one of them could disappear, and there was nothing that Georgio or Dirk could do about it. Damn it, life really sucked sometimes. The ironic thing was that Georgio didn’t blame Dirk’s sister. He just wished that he had the courage to do the same thing. He would love nothing more than to bring down his brothers and put an end to their tyranny.

Share what you thought about Passion Under Fire and earn reward points.