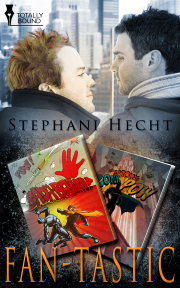 Everybody knows the best lovers are geeks.

It's time again for the annual Comic Book and Horror Convention. Normally, Deke liked to avoid these things. While he may be a well-known actor, he wasn't hunky or a beefcake and he was always overlooked. In fact, most people like to call him 'the geek of geeks'. But, the producers of his popular TV series don't care and they order Deke to go. So, while he knows he won't have any fun he has no choice but to attend.

Blake harboured a crush on Deke even before the other man became famous. When he finds out that Deke will be at the convention, Blake knows he has to attend as well. Since he is trying to promote his own comic, Blake decides that he can mix a little business with his fun.

To Blake's dismay, not only does Deke not remember him, but the actor refuses to believe that Blake could have any romantic feelings for a geek. Blake decides that he can't let this opportunity slip through his fingers, though. He may have given up on Deke all those years ago, but not this time. Will Blake be able to convince Deke to give him a chance? Or will the final credits roll before they find love?

Reader Advisory: This story has been previously released as part of the Unconventional At Best anthology by Totally Bound Publishing

Fan-Tastic was an interesting story about meeting your soul mate at the most odd times. The story between Blake and Deke made for a really good story and I enjoyed it a lot. The bumbling attraction...

Share what you thought about Fan-Tastic and earn reward points.