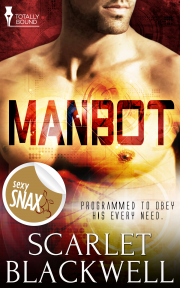 If a robot is programmed to obey your every need, wouldn’t you take advantage?

It’s the future and every home in the US owns a manbot or fembot—robots designed to make life easier and obey an owner’s every command.

When Gray Benedict’s friend Mitchell expresses a sexual interest in his manbot, George, it sets Gray to thinking about his own hotbot, Kavan, a six-foot-three powerhouse set to obey Gray’s every whim. Gray doesn’t want to take advantage of a machine but he’s lonely and needs satisfying.

Kavan makes it clear he’s happy to serve and he carries detailed manuals on satisfying a human completely. Something about him is way too human though and he reaches Gray on a primal level. Soon the unthinkable is happening—Gray is falling for his manbot.

When it’s offered, what’s a man in love supposed to do?

His two friends spat out their drinks. Gray Benedict wiped his mouth with a napkin. “Excuse me?”

Mitchell sat back, smirking, his dark eyes sparkling, lifting his wine glass in a toast. “You heard me. It was fucking great.”

“But… But…” Bespectacled Andrew, the librarian, stammered in shock. “Did he know what to do?”

“Sure he did,” Mitchell said. “He has manuals on everything on his hard drive, you know that. Clearly, they include giving the perfect blow job.”

Gray sat silently, staring. Every household in the country had a housebot now—a manbot or fembot that cooked, cleaned and looked after the children. A perfect being guaranteed not to forget to pick up the dry cleaning or argue over the remote control.

The government gave the standard issue out for free. If you wanted an advanced model, like Mitchell’s F1000, you paid for it. Gray had the intermediate F650 and was more than happy with his manbot.

Only recently had he heard a few whispered stories about some people taking advantage of their robots in the most base of ways. That group obviously now included Mitchell, although Gray wasn’t surprised. Callous and highly-sexed, his friend had been known to stick his cock in a watermelon if nothing else was available. “Did you ask him to do it?” he asked curiously.

“Of course I did. Think George just fancied giving me head one day? No, I told him what I wanted him to do. He checked his memory banks so he understood the command then he did it.”

“Fuck,” Andrew breathed. “Did he swallow?”

“No, he can’t swallow, idiot. He took it in his mouth, and then he spat it out.” Mitchell grinned. “That’s what they need to work on for the next model. I want someone who’s going to swallow my spunk.”

Gray shook his head. “This sounds a little like abuse, Mitchell,” he said, because he was romantic and tender-hearted and still looking for Mr Right at thirty-three.

Mitchell snorted. “Yeah, sure, I abuse my robot. Come on. It was just another command to him. It didn’t mean anything.”

“Are you going to fuck him?” asked Andrew.

Mitchell shrugged. “I might do it. Depends if he has a working asshole. I need to check that out.”

“I’m surprised you haven’t already,” Gray said dryly. “You were always the kid who checked what Action Man was wearing under his combats.”

Mitchell ignored him. “Technically, he has no need for an asshole, so he’s probably not got one. Then again, he’s lifelike in most every other way. He has a cock and balls.”

It was true, you could hardly miss George’s package. He seemed to fill his pants to overflowing, and just recently, Gray had noticed Mitchell staring lustfully at his housebot every time Gray visited. He had guessed it was only a matter of time before Mitchell turned his attentions to the manbot, and he’d been right.

Mitchell shrugged. “Then I’ll buy another.”

Gray found this hard-hearted. He would never dream of trading in his own housebot, Kavan, for another model, nor had he ever thought about the robot inappropriately. There was something rather wrong about it, like perving on a family member.

I really loved this book. It was interesting easy to follow, thought provoking. The story kept you on the edge of your seat for the romantic tension between Kavan and Gray and the events that take...

Scarlet creates two wonderful main characters, one human, and one manbot, and letsthem interact in a world full of prejudice and assumptions that robots cannot now, nor ever, develop feelings. Thus, they...

Share what you thought about Manbot and earn reward points.