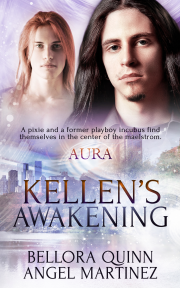 Book 3 in the AURA series

A socially challenged pixie and a former playboy incubus find themselves in the center of the maelstrom as AURA struggles to find a source for the escalating violence threatening the city.

The staff at AURA has had a busy summer. Between chronic understaffing, dealing with warring goblin factions and an unusual number of hazardous Events, everyone is overworked. Sinistrus the incubus, newly hired as an AURA medic, actually enjoys his busy new life of responsible employee and faithful lover to his gorgeous police sergeant, Ness the centaur. Life would be perfect, except for a niggling suspicion about a colleague. Everyone else seems to disagree, but Sin’s certain something’s not right with that pixie.

Kellen, a pixie crossover, loves his job working in AURA medical, even if he is something of an outsider. His job and the friends he manages to make are happy spots in an otherwise dark and secretive life. As the rest of AURA tries to discover the root of the inexplicable rise in violence and large-scale Events, Kellen fights to preserve his own life and what dignity he has left.

These two unlikely heroes must put their differences aside and navigate tragedy and ever-escalating disaster together in order to stop the sinister forces that hold Kellen in thrall.

Dry ground in any city park in October was something of a rarity. When Ness tested the grass in the little park across the street from his apartment and his hooves didn’t squish, he was ridiculously pleased, and reclined his equine half near bushes set back from the sidewalk.

People walking by could still see him, which wasn’t always a good thing, but he wanted to be able to glance up at his apartment window from time to time as he read. He straightened the bottom hem of his sweater and the matching paprika scarf. Not that he really needed either, but he had to wear something on his top half for the sake of decency. Besides, Sin had bought these for him, saying the color was ‘absolutely the bomb’ with Ness’ olive complexion.

Sin said some odd things. Nonhumans who had spent time living on the streets picked up more colorful language, he supposed. So long as they understood each other, it wasn’t important in the least. Ness flicked his tail and got his book and his glasses out of his messenger bag, before settling in to read.

The ebb and flow of scents around him were a constant current of semi-distraction but it was a low-level thing, like background noise. Unless something that was familiar or threatening came into his range, in which case the scent ‘volume’ hit his awareness as a loud note. He was turning the page when such a note drifted into his sensitive nose and caught his attention. Ness lifted his head to catch it again, conscious that it was a particularly equine gesture. Sin had told him he thought it looked hot. Ness hadn’t been sure if he was teasing or not at first, but experience with what Sin found arousing taught him that his incubus had been entirely serious.

The note became louder, although stronger was probably the more appropriate term in the human tongue. He had a hard time thinking of scent that way, though, because it didn’t become more, instead it suddenly slotted into the proper category and was then distinguishable from the myriad other scents clamoring for attention. This one was not a danger, just familiar, and a moment later, its source came walking down the sidewalk with an armload of produce in a bag.

The young man stopped and blinked, then smiled. “Ness! Hey, how are you? I didn’t see you there.”

Quinn left the sidewalk to sit on a nearby rock. Of course, yes. The ground would be too cold for him, even with clothes on his lower half. “Waiting for him? Don’t you live right there?”

“He’s, ah…” Ness’ cheeks grew warm. “He has his weekly appointment. I prefer…not to watch his feedings.”

“Oh. Yeah, I get that.” Quinn squinted at the ground, obviously chasing a thought. “So he’s with…er, someone you know?”

“Yes. She’s an escort. She enjoys Sin’s company and doesn’t charge us so much.” Ness shifted his forelegs, not entirely comfortable with the topic.

Quinn blinked at him, obviously surprised by his reply. “But, Ness, you’re a cop,” Quinn said. “And you’re buying your boyfriend a hooker?”

Ness closed his book and pulled his human torso up straight. Don’t be defensive. Don’t, for all the gods’ sakes, whinny in offense. “There’s legal precedent. Kalia vs. the State established that succubi and incubi paying prostitutes constitutes a legal purchase. The court ruled that it’s necessary for survival and so he’s paying for food, not sex.”

Ness shrugged. “I get a little defensive where Sin’s concerned. I suppose it does get to me a bit, too, though I tell him it’s fine. It is. Fine. He has to feed.”

“Incubi construction. He needs to feed from female sexual energy. The way Sin explains it, yes, he can snack on any sexual energy, but it would be like me eating nothing but a handful of raisins every day. Eventually, he would sicken and die.”

“Right,” Quinn said, apparently rolling that idea around in his head. He looked like he might be about to ask Ness if he was really okay, then thought better of it. He cleared his throat and asked, “So, what are you reading?”

Ness suppressed a sigh. He always dreaded that question. “It’s, ah, Jane Austen. Northanger Abbey. I think it’s better than some of her novels that get more attention…” And there he went again, sounding like some weird conglomeration of wimpy things. “I know. Big centaur reading old romances.”

“It’s a romance? Does it got naughty parts in it?” Quinn winked at him.

“Ah…ahem.” Ness really wished he didn’t blush so easily. “It’s not that sort of romance. The older sort, with carriages and grand estates and everyone being terribly proper, so it was harder to get to the love part. People had to work for it.”

Quinn stared at him for a long moment, opened his mouth, shut it and looked away.

“What? Go on. Ask. I can tell you want to ask me something,” Nestor said.

“Well, it’s just, does it bother you the way people treat horses in those books? Or in general? I mean, I know you’re not a horse, but some people can be such idiots. I’m sure you’ve run into someone wanting to treat you like you should be strapped up to one of those carriages.”

Ness put the book away carefully, took his glasses off and folded them. “There’s a lot of centaur prejudice. Yes. Though I suppose I could ask you if it bothers you how chimpanzees are treated in zoos.” He tapped his glasses against the palm of one hand. “But you’re asking two different things. Does it bother me when someone mistreats a horse? Yes. It bothers me to see anyone mistreated. I’m not a horse. But, yes, humans often see me as one.”

“Hmm, yes. Often without asking. Though the adults are more wary. Lumping all centaurs in together because a few are violent drunkards.”

Quinn grinned at him. “Well, you have to admit a lot of your brethren do like to party. There’s a new centaur-run club opening up every other week.”

He didn’t want to get angry with Quinn. He liked Quinn. So instead of responding to what he felt was close to a racial slur, he asked, “Quinn, why do you think I’m a cop?”

Quinn shrugged. “Same reason anyone becomes a cop, probably. You’re willing to stick your neck out to make sure the world doesn’t get overrun with assholes.”

“There’s certainly something to that.” Ness nodded. “I get a lot of satisfaction out of my job. Thing is, when I applied to AURA, I applied to Research. They rejected me.”

“There’s probably a dozen reasons why that’s a good thing, considering what happened to most of the previous research team, and concluding with not having to work for the world’s bossiest drow, but I get the feeling you’re not mentioning it just because you want me to commiserate with you.”

Originally hailing from Detroit Michigan, Bellora now resides on the sunny Gulf Coast of Florida where a herd of Dachshunds keeps her entertained. She got her start in writing at the dawn of the internet when she discovered PbEMs (Play by email) and found a passion for collaborative writing and steamy hot erotica. Soap Opera like blogs soon followed and eventually full novels.

I love the world these authors have created, all of the details are just amazing.

This whole series is the perfect example of what I love about urban fantasy.

I’ve loved all three of these book...

Kellen’s Awakening is an intense and action packed novel that starts with a jolt and continues on through to the end. Each installment brings a better story and more interesting and diverse c...

Share what you thought about Kellen's Awakening and earn reward points.

Other books in the AURA seriesView Series Page