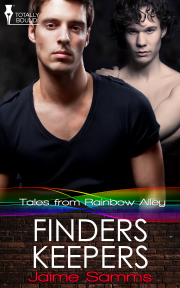 Book 2 in the Tales from Rainbow Alley series

Book two in the Tales From Rainbow Alley Series

All his life, Rory Sanders just wanted please the people he loves and always thought he failed, until the day Gabriel Stark rescues him from Kane's abusive hands and Rory's own misconceptions of what it means to be submissive.

His search for a way into the world that lets him live out his need to serve others has left Rory Sanders estranged from his family and without a lot of friends. When he meets Kane, he thinks his dreams have come true. Those dreams are shattered when he discovers Kane is less interested in his submission than his total subjugation and humiliation. Unable to figure out how to please Kane, Rory is left in a dangerous and humiliating position, bound and helpless in a fetish club where he at last meets people who understand.

Gabriel Stark is not only the private investigator called in to figure out who Kane is and why he has been abusing submissive men, he's also a professional Dom and the man of Rory's dreams come to life. It remains to be seen if Gabe can overcome his own losses and mistakes and be the Dom Rory needs, or if he will let his own past be the ruin of yet another submissive who needs his help. That Rory is physically, emotionally, and intellectually everything Gabe has been looking for only makes Gabe more determined not to get emotionally invested in Rory's recovery.

Keeping Rory safe from Kane might be more than Gabe can manage on his own, and the result of failure could cost the submissive his life.

The last lash fell. The searing pain had turned to buzzing numbness some time ago, and I congratulated myself on making it to the end, on counting every single lash in a loud enough voice to be heard. Kane wouldn’t have anything to complain about tonight. At the last second, I remembered and kept my head down. Kane would let me know when—if—I could look up. I waited, my heart thudding, my entire rib cage shaking, and a pounding going through my head until it throbbed. I’d never been good at waiting.

The clop of my Dom’s boots circled around from behind me, sounding loud over the dull thump of music from the club outside the door. The first thing to enter my view was the toe of one boot, then the butt of the short lash Kane had been using. He now used it to raise my chin.

A sharp crack of the hard wooden handle on the underside of my chin clacked my teeth together. Bright pain from clipping my tongue sparked white spots and elicited a gasp. It effectively stopped the protest I should have known to keep to myself. Another bruise to add to my collection, but at least he didn’t discipline further.

“Did I say you could speak?”

I stared up at him, mouth clamped shut.

He hit me again, a little harder. “Answer.”

The lash butt lifted my chin higher, dragging me up to the limit of my reach. The hard butt dug into my jaw. My back screamed at the stretch on hot skin, and my already shaky legs threatened to cramp.

“Stay.” He said it with about as much expression as he might have said it to a dog.

I stayed. Then I whimpered as the only support deserted me. Kane trailed the wooden handle down across my collarbone, sternum and belly, finally using it to lift my limp cock.

I closed my eyes in defeat. The new bruise under my chin, the searing heat of the lash marks across my back, the agony of stiff muscles and now that torture instrument so near my delicate bits sent me into a tailspin of panic. I shuffled backward, knees scraping across the rubber mat, thigh and butt muscles screaming pain up my spine. I couldn’t go far. The manacles around my wrists, holding my arms spread-eagled above my head, stopped me. New pain lanced down my arms to connect with all the other agonies and draw out another sharp gasp.

“Weak,” Kane spat. My privates flopped against sweaty thighs as Kane retreated. “Why I bother with your training…”

I watched him as he backed away, tossed the crop on the table near the door, and pulled out a pack of smokes.

I dropped my gaze, then my head. If he couldn’t see my face, he wouldn’t see the tears. The rejection hurt more than the physical discomforts, and I knew that was pathetic. Still, ice sank through me, gripping my heart. What else did I have to do? I’d followed every instruction, tried to anticipate every wish and held back when I wanted to beg for surcease. Nothing I’d tried was enough to please this man. Four months, almost, and I had yet to earn a bare word of praise. He told me to try harder, to do better, and I would make it. Now, I wondered if I’d ever get any of it right.

Long minutes passed to the sound of Kane’s puffing. The smell of smoke overpowered the stench of my own sweat. Finally, Kane shifted, clomped back over and released a lever that dropped my hands lower. I had enough slack now to sink back on my heels, relieve some of the strain on my legs and back. I didn’t dare move, didn’t risk disappointing my teacher further.

Still not a word of acknowledgement. It didn’t matter. I’d stay, I’d wait. I’d be here like this when he got back, and maybe, just maybe, he’d be pleased enough to say something.

Briefly, the flashing light and din of the bar beyond our private room entered the dim space as Kane opened the door to let himself out. It faded again as the door swung shut. Still, I didn’t dare relieve the strain, didn’t dare rest. Kane could walk in any minute, and I would prove I was strong, and not the weakling he accused me of being.

I tried not to think how it might have been easier if I’d dared eat more at dinner, but that was a wasted thought. The lashing would have been worse if he thought I’d eaten too much, and not just across my back. I resisted glancing down at my concave stomach. I knew it was free of marks beyond a few old, fading bruises. That punishment hadn’t been administered in over a week, at least. I’d figured that one out. If it was the only part of me that didn’t have bruises and lines of punishment, at least it was something. It could only be a step in the right direction.

Share what you thought about Finders, Keepers PRINT and earn reward points.