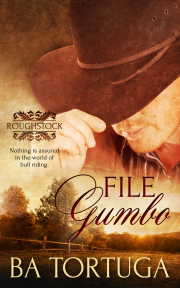 Book 3 in the Roughstock series

Beau is riding like the two-time champ that he is, but nothing is assured in the world of bullriding—not happiness, not wealth, and not survival.

Beau is a two-time champion bullrider who is working on his third title. Sam is his long-time lover and traveling partner, who is feeling the sting of having just about the worst season he can remember.

The two of them are on the road together twenty-four-seven, and it’s starting to get to them a little, between the constant injuries Sam faces, and the relentless press that Beau has to put up with.

Add in friends on the circuit who need their help and the fact that they have to hide what they mean to each other, and it’s no wonder that Sam and Beau’s relationship is starting to wear a little from the friction.

When things blow up in their faces, Sam leaves the bullriding tour for a while, but the boys find out they’re far more miserable apart than they are together. Beau and Sam may agree to disagree in order to make peace and help out their friends Jason and Coke, but in the unpredictable world of extreme sports, nothing goes as it’s planned. Can Beau and Sam recover from what just might be the last ride of Sam’s life?

“Come on, Boug. We gotta hustle.” Sam swacked his traveling partner, Beau, grabbed his gear and his good hat, ignoring the twinge in his shoulder. “Nate? Nate, man? You coming?”

The fucking rodeo was over and they had to get on to the hospital, check on Pharris.

Beau popped out of the little bathroom like a Cajun jack-in-the-box. “Let’s go.”

Pretty light eyes met his, worried as all fuck, then Beau looked away as Nate started bouncing, Coke’s partner in crime covered in a smattering of bruises from a hit in the second round. “Yeah. Yeah. He didn’t look so good, Sammy.”

“He’s gonna be fine, Nate. He’s Coke.” Coke was always fine. Coke had to be fine.

“He’ll need us while we’re here, though.” Beau was putting his feet down hard, making time. They got to the truck, and Beau muscled right out into the flow of drunks and shit.

Nate was on his phone, dialing one number after another, and Sam sighed, peered at Beau. There was beer in the cooler in the back—they could have one at the hospital.

Beau grinned just the tiniest bit, shaking his head. “Man, Coke had to get in there and get hit, huh?”

“Yup.” That was how Fearless Pharris was, though. Always doing crazy shit. Must be why he was a fucking bullfighter.

“Well, we can stay a few days, right?” Beau hit the horn, squeezing in between a dualie and an old Chevy and baring his teeth at the teenager who flipped them off.

“As long as we gotta, Boug.” He glanced back at Nate. “You call your woman yet?”

“No. Shit.” Nate looked so guilty that they all sort of cracked up.

“We got any cash, Poot?” Beau asked, finally getting them onto the little four-lane highway.

“Uh-huh. How much you need?” He had a couple hundred in his wallet, for traveling.

“Oh, I just wanted to make sure we did. For food and coffee and shit. We’ll need it.” Beau was always thinking ahead.

“You’d think, as expensive as it is to go in, anyway. You call Coke’s contact at the sponsor, Nate?”

The bullfighters and Ace had…issues some days. Sam scrolled through his phone till he found the entry titled ‘Butthead’, and hit the call button.

The head of the organization always sounded like someone’d just woke the mean bastard up. “You’d best not be telling me that Beau is cracked up.”

“Nope. Beau’s good. Won the round today, fuckhead.” He grinned over at Beau. “Coke, though, he done got took away to the hospital. Ain’t nobody talkin’, not even to Nate.”

“Shit. Okay. He’s going to the hospital there, huh? I’ll get the guys on it.”

“He’s been there since about three-quarters through. Saved Bonner’s bacon.”

“Yeah. I’ll call, but someone’s gonna have to make them tell shit at the hospital.”

Nate made a face, but took the phone, soon knee-deep in shit with Ace.

“Ain’t he always? He was glad it wasn’t you.” In fact, so was Sam. His position on trampling was anybody but Beau.

“Yeah. Just ’cause I’m winning.” Beau hated politics. Always made his jaw clench just like that. It was cute as hell, but Sam wasn’t saying nothin’.

He nodded. Everybody knew that when that butthead called, you answered. “Hospital’s right there.”

He’d been four chutes over when Coke’d gone down, but he’d heard the scream. Damn near made him piss himself, hearing someone so strong sound like that.

“Thanks.” They made it into visitor parking, and Nate was out of the truck and halfway to the building before they could blink.

“I bet we can.” Beau rolled his head on his neck, not even reaching for his hat on the dashboard. “Nate will have to wade through a bunch of red tape, and ain’t no one else here yet.”

He turned and grabbed a Bud from the cooler, handed it over. “Nate looks worried, man.”

“He should. That was nasty, Poot. Coke will be out a good while.” Beau shrugged, the nickname sliding out as easy as anything. Beau always called Sam ‘Poot’, just like he called Beau ‘Boug’.

“He’s the old man. It’ll happen to us all eventually.” Beau’s fingers tapped the steering wheel, his short little legs starting to jiggle.

“It does. Still.” He reached over, touched one of his Cajun’s legs.

He nodded, the beer just not quite cold enough. All of a sudden, he just wanted to be home, sitting on their porch, listening to the bloodhounds bay like the damn fools they were.

Beau grabbed the beer and sucked the last of it down, hand coming to rest on Sam’s thigh. “Shit, Poot. I know I can’t, but I just want to drive on.”

“I hear you. I’m longing for the house.”

“Yeah. The dogs won’t know us.” Beau chuckled. Sam couldn’t blame him. Their dogs would know them anywhere, and they were too lazy to go find someone else to love on.

“LouAnn says Petunia’s having pups again. Maisy’s in heat, but they’ve got her penned to give her a season off.” Their bed was waiting, their chairs. The big ole kitchen.

“No shit? Buford will be a proud papa.”

“No shit.” They grinned at each other, just beaming a little.

They took no end of shit about having breeding hounds, but really, someone had to be breeders around their parts. Right? Absolutely. And there weren’t a single damn criminal willing to stop in their parish.

Their dogs had the best noses in Louisiana. Hell, law enforcement in Texas fought over them. That said something.

“Yep.” They had shit to do and a bullfighter to pray for.

“Well, come on. Oh, and someone needs to call Dillon.” Beau headed out.

“I’ll get it when we get up there. There ain’t that big of a hurry.”

“Yeah.” Coke was going to be in the hospital a bit. He still hated it, but it was what they did. All of them.

They hopped out of the truck and headed in.

There is a little something for everyone in this book. In the front of the book, the author has a note about the grammar and style. I agree one hundred percent. I love the language and the rough vocab...

Wow! Sam and Beau were electric in File Gumbo by B.A. Tortuga. The ease in which the two men wore their skin and interacted was nothing short of a sensual escapade. Ms. Tortuga delivered a beautifully...

Share what you thought about File Gumbo PRINT and earn reward points.