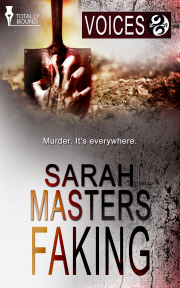 Book 3 in the Voices series

Oliver and Langham take a much needed break to get away from crime—but it follows them, ensuring they’re pulled into another murder case.

Oliver and Langham take two weeks off so they can rest after a string of murder cases has left them worn out. On the way to their destination, Langham spots two criminals driving in the same remote area. Known for being hitmen, surely they can only be on a job. Unable to quell his hunch, Langham is further on edge after their arrival at a small village pub where they’re staying. There’s something about the place—and the woman who runs it.

A mile or so away, a hitman, Jackson, is readying himself to kill a killer who is coming after his millionaire client Randall. Jackson has an immediate attraction to Randall, and the pair discover more about one another in one evening than Jackson’s revealed to anyone in a long time.

Lorie runs the pub where Oliver and Langham are staying. Colin is the butler at Randall’s mansion. How will their actions impact on Oliver, Langham, Jackson and Randall?

Publisher's Note: Although books in this series can stand alone they are best enjoyed in order.

I’m bloody knackered. Could do with sleeping for a week.

Langham pressed his foot harder on the accelerator, wanting to arrive at their holiday destination quicker. He was still below the speed limit anyway but fought the need to break the rules. Using his occupation as an excuse to speed wasn’t a good idea, even though there were no other cars on the country road or cameras to catch him. He glanced over at Oliver, who dozed in the passenger seat, and smiled.

Shit, I love that man.

He rubbed his temple, his earlier raging headache thankfully diminishing. To take his mind off it, he recalled their chats last week about where they were going to go. Their discussions had ranged from a short break in the UK to warmer climes abroad. No matter how much Oliver had pushed for them to go to Spain or France, Langham had resisted, finding excuses why those destinations might not be such a good idea. Dodgy bellies from accidentally drinking tap water, lame stuff like that. And yes, they were meant to be going away to forget about their jobs for a while, but Langham couldn’t quite shake the idea that he might be needed at work. Stupid of him. No one was indispensable. And doubly stupid because he’d waxed lyrical about how they had to take time for themselves with no intrusions.

Hypocritical bastard. Always was, probably always will be.

In the end, Oliver had sighed and told Langham to pick a place and be done with it. Said he didn’t care where they ended up so long as they were together. Langham had felt guilty then, for digging his heels in and getting his own way, but…

I’ve got a gut feeling. Can’t shake it. And I told myself I’d never ignore my instincts.

So, Marsh Vines, that’s where Langham had chosen for him and Oliver to have their much needed break. The string of cases they’d been working on recently had taken their toll. Langham was bordering on burnout.

God only knows how Oliver feels.

Driving out of the city’s belly ten minutes ago had given Langham a sense of freedom he hadn’t experienced in a long time—and a bit of excitement too. He couldn’t remember the last time he’d upped sticks, so to speak, and buggered off somewhere without the worry of The Job on his mind.

Then again, it was still on his mind, albeit hanging around in the shadows, what with the Roulette case having been so recent. But most of his paperwork was done and Detective Wickes was keeping an eye on things, so there wasn’t much Langham had to fret over. Nothing that couldn’t wait anyway.

Langham glanced over at Oliver again. Oliver’s head lolled to one side and his mouth was slightly parted. A moment when Langham had pushed his cock between those lips popped into his head, and he smiled, thinking of how far they’d come in a relatively short space of time.

Focusing back on the road, he thought about what he planned to discuss with Oliver while they were away. Oliver had said he didn’t need to know anything about Langham, that they bumbled along well enough already, but didn’t Langham owe it to him to give at least some inkling as to what his past contained? He knew enough about Oliver’s life to help him understand the man, to know that he’d been brought up being called a freak by his mother and sister for hearing the dead. Then his gay announcement had sealed their idea of him, marking him out as weirder, stranger than they’d previously thought.

What the fuck they’d think if they knew he can also predict what’s going to happen now, I don’t know.

Oliver’s gift had seriously evolved. He received information dumps about crimes and was able to get inside criminals’ minds, reading their thoughts and knowing things about them. It freaked Langham the fuck out, the things his lover saw and heard. It must have been lonely for Oliver before he’d met Langham, living by himself with just spirits to keep him company at night. Now the poor sod had no one except Langham and those ghosts.

And all Langham had was him and The Job.

I’ll broach the subject again, see if he wants to hear all about me, and if he doesn’t, well, I’ll keep my mouth shut. But there’s so much he doesn’t know, stuff I might not want to know if I were him, yet I want to get it off my chest.

He tried to switch his mind off of that—wouldn’t do to dwell on something he wasn’t sure would even happen. Pointless filling his mind with shit if he didn’t need to. Although he’d been told by the higher-ups at work not to let seemingly insignificant things pull him from the larger picture, he’d learnt that those were the things that often ended up breaking cases. Oliver may well think of Langham’s past as insignificant, nothing to worry about, and maybe he was right. Maybe those insignificant things, if Langham pressed to tell them, would break their relationship.

Pack that the fuck in. Don’t think about it.

The countryside idled past as he drove—he wasn’t going over the limit with his blue lights on, as was usual, but at a speed the everyday person took—and it reminded him of the last time he’d been out of the city and had seen vast expanses of grass. No other cars occupied the road, and it seemed like they were the only people on the planet.

I wish that were really the case. Just for a little while.

Fields stretched left and right, each bordered by lines of trees, a patchwork quilt of greenery. Marsh Vines wasn’t that far from Lower Repton, where they’d met a couple who’d found themselves smack bang in the middle of the Queer Rites case. They hadn’t seen Dane and Adam for a while now, so maybe they could catch up at some point over the next fortnight. Langham wondered whether he’d subconsciously chosen somewhere so close to home then tossed that idea out of his mind.

He looked at Oliver again and wondered what he was dreaming about or whether Oliver was seeing things he didn’t need to see. The bloke had bags under his eyes. And like Langham, Oliver would do well to have a good rest, a time where he could reflect, recharge. Langham hoped that the channelling shit Oliver had done before they’d left, where he’d closed the gateway between this world and the next, worked. Selfish as it sounded, the last thing Langham wanted was Oliver coming out with a snippet of a conversation he’d had with someone recently deceased. Langham would have to report it to Wickes, then would probably get the urge to investigate it himself. Oliver didn’t need this shit twenty-four-seven. He deserved the chance to live like a normal person, without the constant voices in his head.

Breathe, that’s what they needed to do.

He glanced in his rear-view mirror. A car was in the distance, an indistinct shape that broke through his musings and announced that his earlier idea of them being the only people in the world was bullshit. Still, it had been a nice thought at the time. It was going at quite a clip, that car, and instinct kicked in, Langham estimating how fast it was going and whether he’d pull the driver over and give them what for.

Once a copper, always a copper…

He slowed, making a mental note of his own speed so he could better judge theirs if they sailed past. Another glance in the rear-view found him looking at the car again, much closer now. A brief memory of the Sugar Strands case floated through his mind and how Oliver had done this very thing, keeping an eye on a car behind him. Except it had been dark then, and the man tailing him had been a lunatic. A killing lunatic.

Share what you thought about Faking and earn reward points.