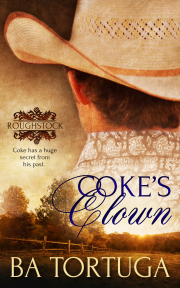 Book 4 in the Roughstock series

How does Dillon take care of Coke when Coke’s destroying himself?

Bullfighter Coke is having a rough time in the Roughstock universe. When his dear friend Sam Bell is injured at the finals of the bull riding season, he takes that and his injuries pretty hard. His very own clown, Dillon, is determined to take care of Coke, which is tough when Coke is usually the one to care for everyone. Coke has a huge secret from his past, though, and, when Dillon digs to discover what it is, the skeletons in Coke’s closet threaten to destroy both men.

Publisher's Note: This book has been previously released elsewhere. It have been revised, re-edited ansd significantly expanded for re-release with Pride Publishing.

“We shoulda got to him, Nattie.”

Coke blinked at the tumblers, then at the mostly empty bottle of Jack. There was a third, for when they finished this one. It took some blinking, but he got the booze in the glasses, the image of Sammy Bell bloodied and broken and convulsing in the chute clear as a movie in his mind.

“We shoulda got to him. Why the fuck didn’t we get to him?”

Coke Pharris snarled a little, glaring at the wee Aussie. Fred was a dear, but he was fucking annoying and goddamn stupid. “We cain’t be fucking human. We gotta be better. Gotta be bigger, damn it.”

The whiskey burned all the way down.

“So, what, you’re going to be a monster, Coke?” Dillon appeared, so washed out, almost transparent.

“How’s Sammy?” He tried to stand up, stumbling into Nate. He could see Tracy behind Dillon, fluttering a little.

“He’s out of surgery. They say that part went well.” Dillon took him when Nate passed him over, hands on his arms.

“I want to go back to the hospital, then. Sit with the Cajun. Pray.”

That bull’d come around and tossed Nattie like a bag of potatoes. He hadn’t even seen Sammy drop into the chute.

“No.” Dillon’s voice was flat, hard. A lot exhausted. “No, you need to rest. You have to work tomorrow. All of you.”

“Hoss. We done drunk two bottles. My lady needs me.” Nattie’s face was all blurry-like.

Damn. Even Nattie was letting him down. Dillon’s fingers tightened until Coke felt them dig in.

He growled, stumbling through the unfamiliar sitting room. Shit, he didn’t even know where the fuck he was.

“Steady.” Dillon led him out into the hall and he remembered. The hotel hospitality room in the convention area. Shit. He was sloshing.

“I need to go back to the hospital and see Sammy. Tell him I’m sorry.”

“Coke, he’s not awake. They’re gonna keep him under until the swelling goes down.” Dillon sounded like he was talking to a child.

“I got his blood all on me. Jase didn’t bleed none.”

“No. No, he didn’t. Sammy’s scalp peeled back.” Dillon had blood on him, too. Coke vaguely remembered Dillon pulling him off Sam when the EMTs came.

He nodded, or tried to. Jesus, there were sore spots in his neck and shoulders. Bone. There’d been bone. And so much fucking blood. And he should’ve got to Beau, to Sammy.

“Coke. Damn it, babe, would you listen to me?” Dillon stopped by the elevator, shaking him some.

“Whut?” He frowned up at Dillon, trying to focus.

“You need to pay attention. One foot in front of the other.” Man, Dillon was multiplying, then he wanted Coke to do addition.

“I think I oughta sleep here for a few minutes.” He couldn’t keep a bunch of Dillons happy. He didn’t have enough cocks.

“No, babe. We need to sober you up a bit before you sleep.”

“Sam Bell got hurt bad. We tried to get to him.” Coke was tired of not saving ’em. Tired of his boys laying in the dirt and not being able to wake up.

“Oh, Coke. I know. You tried so hard. Sometimes the bull is just faster.” All the Dillons looked one way, then the other. Then the middle one moved up close and kissed his cheek. “I’m sorry he got hurt, babe, but the other riders need you tomorrow.”

“I’ll be there. I will. I just. I gotta make the hurt go away some.” Coke was fucking drowning in it.

“I can help with that.” The elevator dinged. “I’m way better than alcohol.”

“I left my other bottle back there.” He stepped into the elevator, his knees screaming at him. God, he was tired.

“I know. I made sure no one got it.” Clown-boy could be such a killjoy.

The elevator made him want to puke. “Yeah.” Coke closed his eyes, but all he could see was Bell’s skull bone.

He wasn’t sure he could bear it, how nice Dillon was being.

“We called Andy and Jase yet?” He bounced down the hall.

“No. No, not yet. I was busy while you were getting bombed.”

He stopped, turned, and stared at Dillon. “Excuse me? I was at the fucking hospital. Y’all sent us away. I was more than willing to man up and help.”

Dillon’s teeth ground audibly. “I know that, babe. Troy thought it best if you left, and I agreed. However, you could have been doing something useful instead of getting sloshed!”

Wow. Dillon could be a harpy.

He stared at Dillon, hands creaking into fists, tension ratcheting up inside his spine like there were little guys with pulleys tugging him tighter and tighter. “Useful. Right. I’m gonna take a walk.”

Coke headed back toward the elevator, his shoulders up under his ears.

“No, you’re not. You’re going to come back to the room and clean up before Shaun or Jonesy see you and ship you off to the emergency room.” Dillon caught his arm.

“I was in the fucking emergency room and they made me leave!” He was going to shake the beautiful son of a bitch. “It hurts. It fucking hurts, and we needed a little edge off.”

“Okay. Now it’s off, right? Off enough that Nate’s wife is calling me and telling me to come get you.” Dillon dragged him to their room, stuffing him inside just as a couple of doors opened in the hall, folks peeking out.

He was so fucking pissed off he was shaking, every single inch of him tense and tight and raw like he’d been burnt.

Dillon turned to face him, chest bumping his. “You think I don’t know? Sam is one of the few people who actually gives two shits about me. He’s my friend. I fucking know.”

Coke counted to five, which was as far as he could go, then he carefully picked Dillon up and moved him away. “I’m sorry, cowboy.”

Then he turned and buried his fist into the wall, about to the elbow.

Texan to the bone and an unrepentant Daddy's Girl, BA spends her days with her basset hounds, getting tattooed, texting her sisters, and eating Mexican food. When she's not doing that, she's writing. She spends her days off watching rodeo, knitting and surfing Pinterest in the name of research. BA's personal saviors include her wife, Julia, her best friend, Sean, and coffee. Lots of good coffee.

If you like rough and tumble cowboys, bullfighters, rodeo clowns, sweet romance, and some hot and raunchy man-sex (hey they are cowboys! and there are tender moments as well!) You will love this one!<...

I loved how Dillon never stops, he never lets Coke fall. Through the rough, the tough, the sad and the WOW did that just happen. Dillon is the rock.

We also got to see the rest of the gang...

Share what you thought about Coke's Clown and earn reward points.