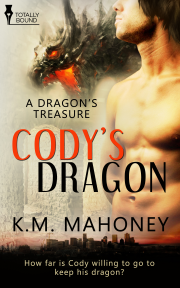 Book 1 in the A Dragon's Treasure series

How far is Cody willing to go to keep his dragon?

Kirit is lonely and he’s sick of coming home from the king’s assignments to a cold, empty cave. After searching for years for a mate, Kirit decides it’s time to try a new approach. Against the advice of all his friends, he heads for the human side of the world. There he finds Cody, and the man is everything he could ever want. It takes a little bit of persuasion, but he manages to talk Cody into coming back with him to Faerie.

Within a week of arriving, Cody is beginning to rethink his impulsive decision. He’s trekked across more terrain than he would care to remember, been summoned to meet a king, and flown on a dragon—not an experience he’s willing to repeat anytime soon. Kirit’s growly possessiveness is starting to wear on his nerves, and the unexpected hostility he encounters at the palace is almost enough to make him give up.

But Cody is stubborn. He may not be willing to admit it out loud, but Kirit has got under his skin. He may even, shockingly enough, love the big guy.

Now Cody has to decide what he’s willing to do to keep the man of his dreams.

Kirit’s boots hit the pavement with a dull thud. He paused a moment and surveyed his surroundings with narrowed eyes.

Nothing unusual caught his attention from where he stood, hidden between two buildings. He didn’t really expect it to. Old habits were hard to break, though.

He shifted his pack into a more secure position before diving into the crowded walkway. He would have to pick one of the busiest times of day to arrive—bad timing all around. At least the weather was still warm, and he wasn’t forced to wade through knee-high snow. Denver was a bitch in the winter.

Kirit ate up the distance with long-legged strides, people unconsciously clearing a path for him. He knew his sheer size, along with his harshly carved features, didn’t invite any pleasantries.

It took Kirit less than ten minutes to cover the blocks to his destination. He ascended a rickety staircase, which clung to the outside of the brick building with precarious tenacity. The metal door squealed loudly when he opened it, revealing a dim and narrow hall. Halfway along, he rapped firmly on the door marked 1207.

“Who’s there?” A voice called from the other side.

Locks clicked. Kirit counted six. That was, in his opinion, a bit unnecessary. Harper wasn’t exactly helpless on his own.

The door swung open to show a short, stocky man standing there. He had well-tanned skin and a spiked mess of blue-tipped brown hair. “What’re you doing here?”

“That’s a marvelous way to greet someone. Are you going to let me in?”

“Will you go away if I don’t?” Harper stepped aside to let Kirit enter his tiny apartment.

Once inside, Kirit dropped his pack to the floor next to his feet, not bothering to look around. He’d been here often enough and there wasn’t much to see.

“Want a beer?” Harper disappeared into the tiny closet he called a kitchen.

Harper reappeared seconds later, popping the lid off a bottle. He let it fall to the floor, obviously unconcerned when it bounced off the cracked ceramic tile and rolled under the olive-green couch. “So, what brings a high and mighty Draak to the human realm?”

Harper’s expression sharpened with interest. He let the bottle in his hand dangle at his side for a moment. “Dragon, Fae, or—”

“Not that kind of hunt.”

“Oh.” Harper returned his attention to his drink.

Harper choked, spraying his last mouthful of beer across the room. The distance was impressive—Kirit had to sidestep to avoid being hit.

“Your hearing is fine. It’s the rest of you that’s…going.”

“Yeah, yeah. Tell me something I don’t know. But you’re going right alongside me. A mate? On this side? Are you nuts?”

“It worked for Merrick.”

“Everyone keeps saying that. I’m sick of being alone. My mate is clearly not behind the Veil, and I’m not interested in waiting for the next generation to grow up. I didn’t come here for a lecture. I’ve heard it all. Dozens of times.”

Harper looked resigned. “Fine. Why did you come, then? Where do I fit into this grand scheme of yours?”

“I need connections. Information. What is the best way to meet the most number of people in the least amount of time?”

Kirit crossed his arms and raised one dark eyebrow.

“Do you realise how many people live in this frickin’ city?” Harper pointed out.

“Shall I give you a precise number or an estimate?”

“Shut up.” Harper groaned. He grabbed another beer before plopping onto the couch. The ragged piece of furniture echoed Harper’s groan, creaking ominously under his weight. “Make yourself comfortable,” he said, waving with his bottle. “This will take a while. Oh, and grab something to write with. You can make a list.”

Kirit did as directed, settling himself gingerly on a chair which was slightly newer than the couch, but even uglier. “You may begin,” he directed.

“Next time, I’m not opening the door,” Harper declared.

Share what you thought about Cody's Dragon PRINT and earn reward points.

Other books in the A Dragon's Treasure seriesView Series Page