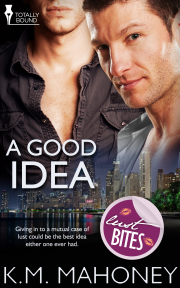 Take two men who think the best years of their lives are behind them. Throw in one raging attraction, and stir liberally. Giving in to a mutual case of lust could be the best idea either one ever had.

Daniel Haversohn is stuck in a rut, and he knows it. The kids are grown and gone, he’s years past being ‘over the hill’, and the only excitement he gets these days comes from the occasional argument with a supplier. Owning a bar keeps him busy enough, but each night he has to go home to a cold and lonely house. Enter Joe Masterson.

Joe has known Daniel for longer than he cares to remember, but the military was his life. Now, after twenty-five years of active service, he’s a free man again. And he hates it. When Joe goes to his favourite bar to drown his sorrows, Daniel sees him moping and offers him a job. Tending bar is definitely a downward career move, but Joe is just bored enough to take it. The problem? Leaving the army behind must have knocked something loose in his libido, because he can’t stop staring at his boss’ arse. Now Joe has to decide if he can throw aside a lifetime of training for one moment of passion. And, just maybe, something deeper.

Daniel slammed the hood closed and wiped his hands on his jeans.

Blonde curls bounced into view, followed by a petite form as his daughter climbed from the car.

“Thanks, Dad. You gonna be okay?” Ashley gave Daniel a tight hug. The scent of strawberries wafted through the autumn air.

“Of course, sweetheart. Have fun and call your old man some, huh?”

A swift kiss to the cheek, another hug, then Daniel was watching his little girl pull out of the drive.

When the car disappeared around the corner, Daniel finally turned and went into the house. He closed the front door behind him, the sound loud in the silence. Standing still for a minute, he felt the stillness down into his bones, the loneliness settling in for a good long stay.

The big picture window that ran along the front of the living room poured sunlight onto the carpet. It really should be cloudy. Maybe raining nicely.

Damn, he was maudlin today.

Daniel ran his hand down his face and stared out of the window, not really seeing the familiar vista of the neighbourhood he’d lived in for the past ten years. He should be used to this. Two kids in college—one a senior, one a sophomore—and every visit was the same. He almost wished they’d quit coming home, just so he wouldn’t have to deal with the gut-wrenching silence when they left.

“Stop being so ridiculous,” he scolded himself. His self-pitying mood was getting on his own nerves.

Daniel cursed and dug his keys from his pocket. He hadn’t planned to go into work today, but maybe a couple of hours slinging drinks and wading through paperwork would help him forget about the still house trying to suffocate him.

Joe slammed back his drink and motioned for another. That one disappeared as quickly as the first. Moss looked concerned. It wasn’t an expression Joe could ever remember seeing before on the burly bartender.

Maybe that statement would have been more believable if Joe hadn’t muttered it to an empty glass of whisky.

Moss was a pushy bastard. Funny how he’d never noticed that before.

“All right, if it will make you happy, I’ll switch to beer.”

“Not quite what I meant,” Moss said wryly, but went to the tap anyway.

The bar was quiet tonight. Only a few of the scattered tables and comfortably worn booths were occupied. Most of the customers were single men, focused either on their drinks or on a game displayed on one of the four big plasma screens. It was a typical corner bar, popular with men escaping their wives or significant others for an hour or two. It hadn’t changed much over the years—the scarred wooden bar and the battered cushions were the same as they’d been last year, and the year before that, and for more years than Joe cared to remember.

He was getting old. It sucked.

Ms. Mahoney did though pack a lot into the short tale as the story gave way to friendship- laughter and happiness- with a nicely written dose of sex.  There are times a story gets lo...

A Good Idea really is a good idea. A very cute and sexy story about two older men trying to find their feet in the dating world. Their clumsiness and reluctance to actively engage th...

Share what you thought about A Good Idea and earn reward points.

I never grew up. I admit it proudly. I’m thirty years old and I still love cartoons, I have the entire collection of Disney animated movies, and my bookshelves are brimming with children’s books. But I think being an adult is, in some ways, highly overrated. There’s a sense of wonder and magic to the world when you’re a kid that you are expected to leave behind as you age. No matter how old I get, I never want to lose that.