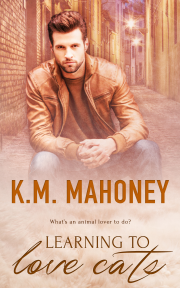 It isn’t exactly a match made in heaven.

Mike isn’t much of an animal lover, but his sister insists that every little boy needs a pet. Which is how Mike finds himself sitting in a veterinary office, trying to explain the facts of life to his four-year-old nephew while holding a dead hamster in a shoebox. It’s not one of his finer moments. So, of course, that’s when he encounters the cute, shy and utterly lust-worthy Riley Laytham.

When they meet up again, the chemistry is explosive. Even cat scratches, rampant allergies and siblings with incredibly bad timing aren’t enough to deter Mike. Riley is worth any amount of trouble, and Mike is going to prove it to him.

Riley is pretty sure Mike is unique. Whether that’s good or bad is still up for debate, although he does have to admit that the sexy man’s persistence in the face of adversity and embarrassing situations is oddly endearing. Riley believes love takes time to grow, but maybe for Mike he’ll make an exception…even if Mike staunchly declares that he doesn’t like cats.

Publisher's Note: This book has previosuly been released elsewhere. It has been revised and re-edited for re-release with Pride Publishing.

The cat was giving him a disdainful glare.

Mike shifted uncomfortably under the intensity of those unblinking eyes before deciding the thing to do was glare back. Next thing he knew, he was locked in a staring contest with a damn cat. And worst of all, he was losing.

“Cats. I’m not a fan. But the wife thinks the stupid thing walks on water.”

Mike tried to keep his deflation from being visible. There was always a wife these days, wasn’t there?

The tugging on his sleeve distracted him from Mr. Cute and Married and his psycho cat.

Shit. If the damn hamster died on his watch…

“I’m sure he’s just sleeping,” Mike said, lying through his teeth to the four year old. The hamster was suspiciously still inside his shoe box.

“Don’t poke at him.” Mike snagged the little hand. Then he took the cardboard box away for good measure. “I’ll go see if the vet is ready to see us yet.”

Mike approached the front desk, dead hamster in hand, with no clue what to do next. He plastered on a smile for the lady behind the counter. “Hey. I don’t suppose you keep spare hamsters lying around?”

The look he received in return made him feel about two inches tall.

Mike shrugged. “They all look the same to me. He’s only four, how’s he gonna know the difference?”

“It’s his pet. He’ll know,” she informed him sharply.

Mike wasn’t so sure about that. The thing was small and brown and looked like every other hamster Mike had ever seen. And…well, four. The kid still thought it was hysterical to take off his pants and tear around the front yard in his skin. And that sticking vegetables into various orifices was a good way to disguise that he hadn’t eaten them.

God, that had been the weekend from hell.

“Anything I can do to help?”

Mike turned. Damn, forget the clubs. He would just start hanging out at the vet to pick guys up. This one wasn’t as cute as Cat Guy, but he was close. Damn close. And that shy smile was definitely something special.

“Not unless you have a hamster in your pocket. A live one,” he added with a rueful glance at the box.

“Sorry. Ever thought about a pet that was a little less…fragile?”

“Not my call. I would have gotten him a puppy.”

“Puppies are a lot of work. Cats, on the other hand—”

“Riley, you can’t possibly be trying to pawn off a kitten already.”

A man in a white lab coat came up to them, staring at Mike’s companion with a smirk.

“And each one will net you a small fortune, so stop complaining.” Bobby then looked with sympathy at Mike. “I think you’re my two o’clock. Come on back.”

“Not much point,” Mike said. “The thing’s going stiff.”

Riley stifled a laugh. Bobby coughed to disguise his own amusement. The receptionist—Mike had completely forgotten about her—harrumphed disapprovingly.

The alarmed shout preceded a tremendous crash. Mike squeezed his eyes closed. He didn’t want to look. It was his own fault, though. He knew better than to take his eyes off the squirt for more than a few seconds.

“Go ahead and write up a bill for the damage,” he said. “I’m going to call his mom and see if a trip to the pet store is next on the list.”

“You haven’t even seen what happened,” Riley pointed out.

“It’s Charlie. There will be damage.”

“Give me the hamster,” the vet said. “Riley, you got a few minutes? I’m sure Charlie would love to see the kittens while his uncle and I discuss business.”

“Please and thank you.” Mike handed the box over with a sense of relief. Lisa would scold him for letting her kid go off with a stranger, but the vet clearly knew Riley well and Mike had a mess to clean up. The display of extremely large dog food bags had slid off their perch and were now scattered across the linoleum. How the heck had he managed that? Each bag was probably three times heavier than Charlie himself.

When it came to his nephew, Mike found it better not to question.

Riley took the small hand in his and smiled down at the round, chubby face. “Hi, Charlie. My name is Riley.”

He got a big, gap-toothed smile in return. There was a bit of what looked like chocolate on one front tooth, and a dark smudge on the pudgy chin.

“Is your hamster sick, too?” Charlie asked.

Riley smiled wider. Damn, but Charlie was a cutie. A handful, obviously, but adorable nonetheless. “I don’t have a hamster. But I do have a cat, and she just had some kittens. Would you like to see?”

The kid squealed and took off, trying to drag Riley with him.

“Slow down,” Riley said around a laugh. “They’re not going anywhere.”

Like most kids, the instant he saw the kittens, Charlie was enthralled. Riley squatted down next to him and they stared into the cage together. Mama cat was sprawled on her side, surrounded by tiny, somewhat scrawny, kittens. The constant mewing was extremely loud. It always amazed Riley how something so small could make so much noise.

“We have to be quiet,” Riley told Charlie. “They’re very little and Lily is very protective.”

“Is Lily the mommy? What are their names?”

“They aren’t named yet.”

“You should name one Stan,” Charlie declared. “I want a kitten.”

“Better talk to your uncle about that,” Riley cautioned. “Somehow he doesn’t strike me as a cat person.”

Riley stood quickly. He had been so intent on the cats and the short person at his side that he hadn’t heard Mike enter the kennel. “Hey. All squared away up there?”

“Yeah. Cost me a dam—danged fortune, but we’re all set. Come on, buddy,” Mike said, turning his attention to Charlie. “Time to go. Your mom’s almost done with work. We’ve gotta go pick her up.”

“’Kay.” Charlie bounced to his feet with the boundless energy of the very young. He ran for the door.

Mike snagged the back of his shirt in mid-stride and pulled the boy to a halt. “Hang on, sport,” he scolded, although Riley could see the amusement in his eyes. “Say thanks to Mr. Riley first, huh?”

“Thank you!” Charlie said. “The kittens were real cute. Unca Mikey, can I have a kitten?”

“Talk to your mother,” Mike said absently. His attention was focused not on his nephew but on Riley. Riley squirmed under the intensity of his gaze. “Listen, I know now’s not the time, but would you be interested—”

“I gotta go!” Charlie was doing a little dance in his red sneakers, nose scrunched.

“Here.” Riley dug out his wallet and fished out a business card. He handed it to Mike. “Just in case.”

Mike took the card and tucked it into the front pocket of his jeans. “I’ll call you,” he promised.

Riley watched the pair leave. The sight of the big man holding the hand of the small boy was sweet, but he kept getting distracted by the way the faded jeans hugged the ass of said big man.

“Damn, but I hope he was going to ask me out,” Riley told Lily. She didn’t reply. Riley sighed. It was probably wishful thinking, but he could have sworn he’d seen interest in Mike’s eyes.

For this very cute, very funny book (because I LOVED that last bit at the end!!)

Share what you thought about Learning to Love Cats and earn reward points.