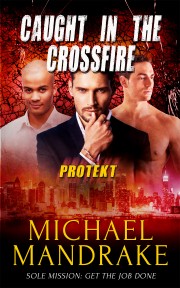 Caught in the Crossfire

Book 3 in the PROTEKT series

Musician Bastien Desmarais is thrust into danger, but he’ll have a chance at love—not once, but twice.

Tryst Olivares aka Domingo Macaya was hired by PROTEKT to guard superstar Bastien Desmarais because of threats he’d received. However, Domingo has an ulterior motive. Instead of following through on his PROTEKT assignment, he has other plans that don’t involve the popular entertainer.

Normally independent of security, Bastien sees this move to hire a bodyguard as a hindrance, but he’ll make the best of it. Why not have fun, especially since Tryst has the look Bastien appreciates?

In the midst of searching for a world-renowned felon, Claudius Peltier is very busy. But even this mission can’t deter his infatuation with Bastien. After years hiding his true self, Claudius won’t turn down the opportunity to be something more than the singer’s number one fan.

Reader advisory: This book contains scenes of violence and homophobia.

“Babysitting a spoiled pop star? What kind of assignment is that for a skilled person like me?” Newly recruited PROTEKT agent Tryst Olivares grumbled to himself as he eyed his instructions from his boss, Wes Moreland. He hated the assignment and only wished to get this first task out of the way before the real deals came into play—or perhaps he didn’t, since he had ulterior motives that went against everything for which he’d taken the PROTEKT oath.

By the time his new ‘friends’ got a load of what hit them, he’d have been paid handsomely and would be lounging around on the beaches of St. Tropez with a drink in hand, along with plenty of tight asses to take pleasure in.

Just like his name, Tryst didn’t do long-term relationships. He figured he was too young to be committed to only one lover. In most of his twenty-eight years, Tryst had preferred to have a wide selection of partners to sample, as if his love life was some all-you-can-eat buffet. In his mind, why settle when you could have all the men you wanted at any time?

No question… Captain Kimball Emerson, the leader of PROTEKT, had caught his eye, but he had an American bulldog for a man, who had more than made his presence felt during their first meeting. Then there was Devlin Crawford and his hot husband Aiden Moriarty, his fellow agents who, in a past lifetime, he wouldn’t have minded having in his bed. Yes, PROTEKT was full of hot men—unfortunately, none of them available.

Tryst would have loved to add all three to the notches on his proverbial belt. Tryst loved variety and never allowed anything but another man’s commitment to stop him from jumping into bed with someone. He had to have some kind of morals, even if they meant nothing to him. Besides, his mother had always berated Tryst about not following the Lord’s word, and the one command he decided he’d follow would be the one about adultery.

Doesn’t everyone do that just to survive?

In this dog-eat-dog world, only the people who did things underhandedly would be left standing, so Tryst chose to do everything else but steal someone’s man. More than God, Tryst believed in karma, and he thought if he wanted to live happily, he’d better not test the bitch.

With his favorite drink in one hand and the tablet containing the instructions on where to meet the spoiled pop-tart in the other, Tryst leaned back into the leather sofa at his new digs Wes had given him. Tryst had to say that Wes’ attention to detail, as well as the lengths he went to care for his agents, impressed him. In the few days he’d been in PROTEKT, he’d been awed by the manner in which the organization was run. From top to bottom, PROTEKT had ironclad leadership, teaching their agents how to spot and solve problems, as well as man-to-man combat techniques. They thrived on picking the kind of people who wanted to take justice into their own hands.

If only there were a way to make both of his employers happy, but unfortunately, that would never occur. There were certain things he loved about both jobs and wished they could be merged into one to be completely fulfilled. Perhaps this was yet another reason why Tryst decided to stay single, because indecisiveness had always plagued him.

Saddened by that blunt realization, Tryst sipped from his glass again, tasting the sweetness from the liquor on his taste buds. He wasn’t sure exactly what it was, considering that before he’d joined the organization, Tryst’s regular poisons had been tequila and beer.

Regardless, he’d thoroughly enjoyed the flavorful liquid and relished its tastes, even though he’d been told not to indulge himself too much for fear of losing focus. After all, the time for ‘operation revenge’ was on the horizon, and according to his ‘actual’ boss, he’d better not screw up or it would mean his untimely death.

“Bastien, listen to me. I know you’re not fond of this idea, but I wanna keep you alive,” Bastien Desmarais’ manager Spencer Borgess said to him.

“This is all a sick joke by some jealous fuck and you know it. I’m the biggest pop star in the world right now. Bieber and One Direction ain’t got nothing on me. I’m not scared. Why should you be?”

“Because they attacked Leroy a week ago, looking for you, asshole!” Spencer yelled at him. “Leroy is a good employee and they roughed him up to get information out of him.”

“Yeah, but he came out okay, right? I mean, he’s not hurt that seriously, is he?”

“If you wanna say two broken ribs, a concussion, a busted nose and two black eyes isn’t serious, then so be it.”

Bastien cursed himself, thinking of the roadie that constantly had his back, especially when the fanboys and girls got too close. Bastien had had a drunken sex moment or two with Leroy in the past, and even though none of that had turned into anything, Leroy still cared for him. And here Bastien was acting an ass, thinking that him being physically assaulted was no big deal.

“Yeah, I think I do. Some dipshit beats up Leroy because they didn’t get an autograph from you or some other bullshit reason. And these sweet little love notes of ‘I wanna kiss you and kill you’ aren’t cute, either.” Spencer shook pieces of paper in his hands at Bastien’s face.

“Lemme see, Spence. I should be able to look at them, right? After all, it’s some crazy fan of mine looking to get more attention.”

Spencer sighed, handing them to Bastien in haste. “Okay. Don’t say I didn’t warn ya’. They’re a little disturbing.”

Bastien picked up the first one, eyeing it closely. It had been typed on a computer and signed in what appeared to be blood by his secret admirer, who wanted to kiss him and fuck his corpse.

“Eww, what kind of…?” Bastien tossed them on the table in front of him.

“I told you. The other ones are more detailed and not pretty at all. I need to hand them to the authorities. This shit’s getting out of control.”

“But does that still warrant hiring a bodyguard? I mean, I’m a grown man. Just because I’m pretty and gay doesn’t mean I can’t whoop some ass. I took martial arts through my school years. I know how to deliver a quick punch to somebody’s nuts.”

“Mmhmm. Well, although I don’t doubt your skills, I refuse to take any chances. If anything happens to one hair on that pretty, little head of yours, I will be skinned alive by fans from here all the way to South Africa.”

“So true. Such is the life of a pop star manager, hmm? I guess I have no say in the matter then, but can I at least make sure he’s hot? I mean, I do have standards to uphold. Gotta make sure the man protecting me is gorgeous.”

Spencer looked up at the ceiling and shook his head. “Bastien, you’re not fucking the guy. Besides, he’s gotta stay focused.”

“He can stay plenty focused…on my body.” Bastien snorted. “C’mon, Spencer. Work with me here. I can’t have just any old ugly beast protecting me, unless his name is Tom Hardy.” Bastien winked, licking his lips.

“Oh my God. What’s gotten into you? Anyway, he’s coming by with his boss this evening, so please be on your best behavior. I would’ve just hired regular cops, but I thought these men would be better, since they don’t play by anyone’s rules.”

“Really?” Bastien nibbled on his lip. “So, are they some kind of spy organization or something? I hope so, because that could work well in my next music video. You know, for my song Full Body Search? It would be better with some secret agents than a bunch of cops.” Bastien smirked.

“I doubt these men want to be involved in your mini-movie, but we’ll ask. Now, let me get going. I have some phone calls to make. Don’t leave this place unless it’s with someone, all right? Better yet, if you need anything, I’ll ask someone to get it for you.”

Bastien shrugged and ran his hand through his hair. “All right, I’ll follow orders for now. Don’t expect me to do this all the time, though. I need my air and my space.”

“Hopefully, if they catch this asshole, we won’t need to restrict where and when you go.” Spencer nodded and turned on his heel, hastily leaving the room.

Yeah, right. “No one restricts Bastien Desmarais from going where he wants, because, threat or no threat, I’m the one in charge.”

Michael Mandrake pens complex characters who are already comfortable in their sexuality. Thorough these characters, he builds worlds not centered on erotica but rather the mainstream plots we might encounter in everyday life through personal experiences or the media.

Independent reviewer for Divine Magazine. This is book 3 in the PROTEKT series. I have not read books one, On The Run, or book 2, Closely Guarded and I think maybe I should have done. While everything becom...

Share what you thought about Caught in the Crossfire and earn reward points.

Other books in the PROTEKT seriesView Series Page