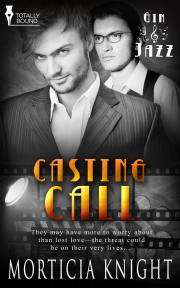 Book 2 in the Gin & Jazz series

Will Carmichael, an impossibly handsome silent film star, longs for the broodingly intense director André Chenard. Can they find their way to one another despite the hidden perils of the prohibition era?

Will Carmichael lives a carefree and fun-filled life as one of Global Studio’s most popular motion picture stars. Young and stunningly attractive, he could have any man he wants. However, the only one he has any interest in is the only one who won’t have anything to do with him.

André Chenard is Global Studio’s newest director. A proponent of the newly introduced Russian method of acting, he aspires to create true art through the films he directs. Not interested in wasting his time on frivolous pursuits, he spurns Will’s constant attempts to catch his attention. Although André can’t stop thinking about the gorgeous man, his initial meeting with Will leads him to believe that he is too shallow for serious consideration.

Resigned to the fact that André will never be his, Will is determined to enjoy himself to the fullest at his favourite speakeasy and pansy club. When his carousing becomes out of control and he’s injured, André steps in to help. As a result, they each discover that there is much more to the other than they had originally assumed.

Right when it seems they have found their way to one another, an outside threat drives a wedge between them. As a result, they may have more to worry about than lost love—the threat could be to their very lives.

“That’s him, isn’t it? That director fellow you’ve taken a shine to?”

Tensing at his friend Oliver’s words, Will took another sip of his gin fizz, then set it down. He schooled his expression before casually glancing over his shoulder to see André Chenard strolling into the speakeasy.

Will turned back around then shrugged his shoulders.

“He’s quite delicious, but I wouldn’t say I’ve taken a shine to him as much as I’d considered allowing him to take one to me.”

“Ah. So it’s been a dismal failure then.”

Trying valiantly to glare at his old university chum, he instead collapsed into hearty laughter, his friend joining in. André picked that exact moment to walk past their table, his gaze drawn by their noisy revelry.

He thinks I’m a fool.

Locking eyes with André for the briefest of moments, Will merely arched one eyebrow as if the man’s presence had no effect on him whatsoever. As if it hadn’t cut him deeply when he’d been tossed off the director’s film set earlier. He had merely wanted the opportunity to be noticed by André and had asked Jack Stone—an actor acquaintance—if he could join him on the set. Will’s laughter had drawn the director’s gaze then too, but not in the way Will would have wished. Beginning nineteen twenty-five as one of Global’s top motion picture stars appeared to have had little effect on André’s opinion of him.

The jazz drag band chose that moment to begin playing in the large smoke-saturated room. Soon the pansy club filled with boisterous music and men dancing happily. The bar was located underneath a haberdashery that was run during the day by the speakeasy’s owners. These were the same two men who ran the respectable business that hid their lifestyle, as well as the illegal hooch they sold at night. It was a world within itself and something Will never could have got away with had he stayed back east with his ever-watchful rich society parents. He shivered a little at the thought.

Trying not to be obvious, he allowed his gaze to flit around the room, tracking where André was and—more importantly—if he was there with anyone. A long and elaborately carved mahogany bar stood at the far end. Rumour had it that it had once graced an elegant hotel before prohibition had threatened its destruction. Behind the bar, a Victorian designed mirror reflected back the interior of the club, making it appear even larger than it was. Several round tables surrounded with walnut bentwood chairs filled the parquet floor. On one end was a dance area with a corner reserved for the various bands that played.

One of the more alluring aspects of the club to many of the patrons were the cordoned off areas at the rear of the establishment. Oriental screens with intricately inlaid designs guarded those spaces. Behind them were plush sofas and chairs, as well as privacy for those who required it for a brief time. Will had never availed himself of those parts of the club. He wasn’t driven to such outlandish behaviour. It wasn’t particularly respectable and besides, he had an image to maintain as a film star.

He spotted André at the far end of the bar near the hallway that led to the washrooms. His friend, Oliver, startled him out of his reverie by clapping him on the shoulder.

“I see Leonard is here. Wish me luck?”

“Of course, old bean. You shall sweep him off his feet!”

“You are a dirty dog, Will Carmichael. I shall roger him once just for you.”

Will laughed again, letting it free, the piano, horns and drums shielding him from André’s judgement.

Not that he’d ever cared one whit about what others thought of him—except for André. Everything about the older man appealed to him. His trim, yet strong physique, calm and thoughtful manner, as well as the large and expressive hazel eyes shielded by round wire-framed glasses. And his hands were a marvel. Will tried not to be obvious as he watched André comb his long, slender fingers through his wavy brown hair. The director’s adamant refusal to wear the pomade that was all the rage was yet another part of André’s rebellious personality that attracted Will.

In addition, he was brilliant. The one long conversation he’d been lucky enough to have with him had involved Jungian theories, classical literature and whether humankind would ever be able to accept free love among all genders. Despite graduating with honours from Harvard, he felt like a dolt around André. What made it all the more endearing was that the man wasn’t the least bit condescending about it.

But he’d been quite unhappy the day before when Jack had sneaked him onto the set. Will hadn’t been able to keep himself from a robust chuckle when Jack had made an unwitting joke about the way in which Will would like to be alone with the director. André had been less than amused.

After calling Jack over to discuss something with him, he’d sent the young actor away and approached Will. There had been a fluttering in his chest as André had walked towards him. It was a sensation he’d never experienced before and there had been a passing fancy that it might mean something important about the two of them together. That notion had been decidedly dashed to the ground as soon as André had spoken to him.

“I’m terribly sorry, Will. But this is a closed set. Jack didn’t realise that when he invited you to be here today. I hope you understand that I must ask you to leave.”

So humiliating. He had sputtered some nonsense about wanting to witness Andre’s artistic genius and had only succeeded in making himself appear even sillier in front of the genuinely gifted man. As much as Will made light of everything and took the stance that life was to be enjoyed and not mulled over, he recognised and appreciated intelligence and vision. André was a spectacular man.

Will pushed his drink away. It had lost all its appeal in the same way the club had for the night. Typically, it was his home in a way that his luxury apartment could never be. His parents had been mortified that he hadn’t at least purchased a house in a more fashionable area—they had insisted that his trust fund could more than adequately provide for such an expense. However, Will preferred the place on Los Feliz Boulevard that several of the other actors and a few of the actresses used.

Although it was close to Global Studios where they all worked, and had both a doorman and a concierge, he could never let on to his family the real reason he stayed there. All of the tenants lived the same lifestyle he did. There was also security so that no one was allowed in the elevator except those who lived there. He never had to concern himself with bringing a man back to his place—they all did. He chuckled to himself.

Except for the women, who wouldn’t be caught dead bringing anyone other than another woman back home.

Share what you thought about Casting Call PRINT and earn reward points.

Who are three of your favorite TV couples?