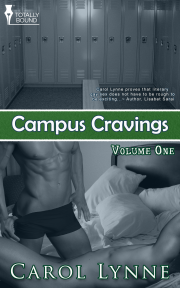 Campus Cravings On The Field: Volume One

Being a gay high school football coach isn't easy, especially in a small town. For five years Justin has repressed his sexuality in order to keep the job he loves. His only serious temptation is the father of his star running back. Sparks fly between the two men, and one Friday night after a winning game, Justin just can't say no.

College is supposed to be a time of exploring new things, learning about yourself and having a good time doing it. For Max Henley, it was the hardest time of his life. After losing his lover in a car wreck, his entire focus became academics.

The problem is, whenever Max thinks about his Professor, the guilt over Nick's death returns. Can Max ever forgive himself enough to love again?

Koby is thrilled when his all-time favourite player agrees to help him. Not only can they work on Koby's upper body strength, but maybe on the growing attraction between them.

“That’s it. Yes, Max. Go deeper.” Justin knew the colour was rising in his face as he yelled. He could feel the hot flush travel from his neck up. There was nothing like watching a kid make the game-winning touchdown. He pumped his arms in the air and cheered with the crowd.

When the final buzzer sounded and the crowd continued to cheer, Justin walked onto the field and shook the opposing coach’s hand. “Good game, Steve.”

“Great game,” Steve replied shaking Justin’s hand. “There’s no beating you guys this season. I’ll be grateful when Max Henley goes away to college next year."

Nodding his head, Justin agreed. There was no stopping his team this year. “I hate to see him go. He’s the finest athlete I’ve ever had the pleasure of coaching.” The two men parted and Justin walked back to the sidelines.

He spotted Max getting a high-five and a hug from his dad, Luc. For a brief moment, Justin’s cock twitched at the site of Luc Henley. He was ashamed to say it but he’d had what could only be called a school-boy crush on that man for the past four years.

The first time Justin met Luc was the start of practice Max’s freshman year. He’d never forget the green of Luc’s eyes on that hot sunny day, greener than the grass under his feet. Justin couldn’t stop staring as he was introduced. A lot shorter than his own six two, Luc’s body was that of a much younger man. Broad shoulders on a lean frame, Justin could tell just by the cut of his clothes that he was rock solid underneath those tailored business suits, he so often wore. Even at only five ten, Luc Henley always had a commanding presence.

When Justin felt his cock begin to swell in his jeans, he shook his head and headed for the locker room. It was always best to remove himself from temptation. Evergreen was a small town and state champion football coach or not, he’d be out on his ass if they knew he was gay. He’d gone five years without the company of another man, five very long lonely years.

After changing into an obscenely tight pair of low slung jeans and white T-shirt, Max called for a cab. The twenty-minute cab ride almost caused him to chicken out. He wasn’t sure if he wanted to know what was at the end of this journey.

The cab pulled up in front of, what appeared to be, some kind of leather bar. With new resolve, Max paid the driver and got out. Opening the door, he was immediately hit with the smell of sweat and men. The bouncer sitting on a stool just inside the door looked him up and down.

“Haven’t seen you in here before, sweet thing.”

“I’m new,” he mumbled as he walked away. The tables in the large, dark room appeared to be full, so Max headed toward the bar. Finding an open stool, Max gave the bartender a slight wave to get his attention. “Tequila, please.”

The man nodded and poured him a shot. “Here ya go, pretty man.”

Max closed his eyes on the endearment. Nick had called him that all the time. Everyone had always remarked about how pretty he was. It was one of the reasons he’d worked so hard at weight training. He didn’t want to be thought of as pretty, men weren’t pretty.

As he carried the bottle into the bedroom, he was sorry to see Koby was already asleep. He knew that sleep was needed, but Julian thought liquids were more important just then. Sitting on the edge of the bed, he ran his hand over Koby’s shiny gold hair. It was so soft. He longed to run his fingers through it. With a sigh, he spoke. “Koby? You need to wake up and drink something.”

“I know, but the doctor said you need to replenish your fluids. Come on, wake up and drink this bottle and I’ll let you sleep for a while.” He ran his hand over Koby’s chest and stomach. A fire lit in his groin as he felt the muscles ripple under his fingers. It must have had the same affect on Koby because he moaned even though his eyes were still closed. Startled, Julian took his hand away and put it on the bed.

Opening his eyes, Koby smiled. “If I drink, will you continue to rub my belly?”

Julian looked at him for several moments. “I’m not sure you’re up to it.” He handed the bottle of blue sports drink to Koby.

Taking the bottle, Koby tried to sit up. Julian helped manoeuvre him until he was leaning against the headboard. Before Koby lifted the bottle to his mouth he took hold of Julian’s hand and brought it back to his chest. “Keep doing it, it makes me feel better.”

Against his better judgement, Julian rubbed circles over Koby’s flesh. He swallowed as he watched Koby’s nipples harden into tight nubs. His tongue tickled with the need to taste one of those hard peaks. He sure as hell didn’t understand what was coming over him. He’d never had these desires before. Fucking had been his only link to another individual. Right now though, he wanted to worship every inch of Koby’s tanned skin. He wanted to crawl under the covers and hold him in his arms, another first for him.

As Koby drank, he maintained eye contact with Julian. When the bottle was empty he reached over and set it on the table. Leaning forward, Koby did the unthinkable and kissed him.

Julian was shocked at the warm tongue probing his lips. Damn, he felt like a terrified virgin. He tentatively opened his mouth and let Koby inside. Julian was overwhelmed at the feelings one kiss could evoke. Koby moaned and put a hand to the back of Julian’s head, taking the kiss deeper. Too much, he was feeling too much emotion.

Breaking the kiss, Julian looked into the bluest eyes he’d ever seen. “Get some sleep. I’ll wake you in a couple of hours with another drink.” He quickly got off the bed and saw the hurt in Koby’s eyes. “I’m sorry, it’s just…” He left the room and walked straight to the deck.

Slumping into a chair, Julian closed his eyes and relived the kiss, his fingers automatically going to his swollen lips. He couldn’t believe at the age of twenty-four he’d finally been kissed with tenderness.

Share what you thought about Campus Cravings Vol 1: On the Field PRINT and earn reward points.