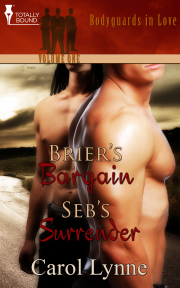 Bodyguards in Love Volume One

st="on">Albuquerque evening. He was so intent on getting to work on time, he didn’t notice the car that pulled up beside him until a horn honked.

Jared jumped and spun around, ready to run. The driver of the shiny black El Camino SS rolled down his window.

Jared took a tentative step towards the car, truck, whatever it was. “Going to work.”

Seb sighed and put the car in park. “Get in.”

Jared opened the door and a blast of heat warmed him within seconds. He buckled his seatbelt and waited for Seb to pull away from the kerb. “It’s just up here another six blocks.”

“Yeah, I know where it is. Mind telling me what the hell you’re doing walking to work in this weather?”

Confused by the man’s anger, Jared inched closer to the passenger door. “Um…going to work?”

“Are you asking me?”

“Huh?” Seb confused Jared more than anyone he’d ever been around.

“Make statements into questions. It’s the lilt up on the end of your sentences, like you’re not sure if you’re going to work or not.”

Seb shook his head and pulled back into traffic. “So why are you walking instead of catching a ride?”

“So why not ask someone else?”

Jared tried to concentrate on the questions, but he kept getting distracted by Sebastian’s dangerous-looking beauty. “I don’t know anyone else well enough to bother.”

With a disgusted sigh, Seb reached into the pocket of his black leather jacket and handed Jared a business card. “Call me when you need a ride. If I’m not on a job, I’ll take ya.”

“Whatever needs doing. Mostly I assess situations and make recommendations on the level of security a specific job requires.”

Sebastian pulled into the small gas station parking lot. Jared opened the door, glancing back at the handsome man. “Thanks for the ride.”

Seb reached out and grabbed Jared’s arm. Out of reflex, Jared tried to jerk his arm back and lowered his head. Sebastian released his grip with a growl of what sounded like irritation. “How late’re you working?”

Jared nodded his head. He knew his job sucked, but beggars couldn’t be choosers. “It’s the only shift they had available.”

Seb rubbed his hands over his face. Jared could tell he irritated the man, but he wasn’t the one who’d asked for a ride. “Call me, and I’ll pick you up. You’ve got no business being on the streets that late.”

Jared walked home from work every night at that time. He wondered why he was suddenly being told he had no business doing it. As grouchy as Seb acted, Jared doubted the man would appreciate a wakeup call at two. Instead of arguing, he stuffed the card into his jacket pocket and got out of the car. “Thanks again for the ride.”

He walked into the store and acknowledged the older woman behind the counter. Mrs Bell seemed nice enough, but she was the nosey type and Jared preferred to keep the skeletons in his closet safely locked away.

Jared stowed his jacket under the counter and watched out the window as Seb pulled out of the parking lot. Why had he waited so long? Jared shook his head. In the three weeks since he’d come to with Brier, Sebastian seemed to run hot and cold where he was concerned.

Seb was the one who’d insisted Jared file assault and rape charges against Rick Sutcliff, but since then, it seemed like Seb could barely stand to be around him. Jared couldn’t help but to think Seb was disgusted by him now that he knew everything Rick had done to him.

Even thinking of Rick had Jared’s stomach clenching into knots. It had been bad enough that Rick terrorised and raped him, Brier and Peter while in the hospital, but then Rick had showed up on his doorstep in demanding to be let in.

Jared had been so afraid of the man, he’d done as he was told. From that day until Brier came knocking on his door, Rick had made his life a living hell. It was the lowest point of his twenty-five years, which was saying a lot.

He glanced down at the long straight scars running up both wrists. Even the events that had pushed him into trying to end his life hadn’t been nearly as hard as the punishment Rick doled out on a daily basis.

“I’m off,” Mrs Bell called, grabbing her purse from the locked cabinet under the counter.

“Have a good evening.”

Officially on the job, Jared took out his hideous smock and put it on. Some nights were harder than others, but Fridays and Saturdays sucked. He knew he shouldn’t complain, even to himself. Getting the clerk job in the first place hadn’t been easy.

Without a high school diploma or a work history, Jared knew the owner was taking a real chance hiring him. Jared had promised the kind man to be the best employee in the store, and he tried on a daily basis to keep his word. The drunks who stumbled in near always put him on edge, but he often bluffed his way through it.

It didn’t matter what he had to endure. For the first time in his life he was making his own money. He was finally free of his abusive parents, the hospital where they’d kept him for so long, and the man who’d almost succeeded in completely erasing what little humanity Jared had left.

He smiled as a customer stepped up to the counter. He may be wearing an ugly smock and doing a job he hated, but at least he was safe to live his life on his own terms. Could his life possibly get any better than that?

Share what you thought about Bodyguards in Love: Vol 1 PRINT and earn reward points.