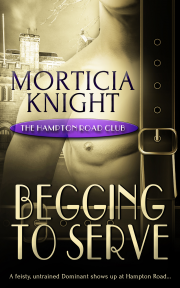 Book 3 in the The Hampton Road Club series

A feisty, untrained Dominant shows up at Hampton Road. Could he be the right man who Colin’s been saving himself for?

Submissive Colin loves his new life and job at The Hampton Road Club. He doesn’t mean to make the staff angry when he reorganizes everything or to frustrate the available Masters by never letting them touch him. He only wants to serve someone, to make them happy, but he’s also waiting for the right man—the way his grandmother had advised him to do before she died.

Another night, another brawl. Roddy had hoped that Hollywood would have better male prospects than Louisville when it came to playing rough. When Roddy’s latest would-be conquest threatens him with bodily harm, Roddy is chased right into the path of two of Hampton Road’s Masters, Ned and Aaron. They describe a wonderful club to him, where sadomasochistic men can enjoy each other, hidden safely behind the walls of an elegant mansion.

The moment Colin and Roddy spot each other, they fall hard and fast. While Master Saul is thrilled that Colin has finally found someone, what do any of them really know about their new guest?

It seems that Saul’s fears are ungrounded until tragedy strikes in Roddy’s world. It’s then that the validity of Colin and Roddy’s new love is truly tested. Was their bond real, or did Roddy have another agenda he’d kept secret all along?

Colin glanced up at Javier, the Hampton Road Club’s Head of Staff. The tall, lean man gazed down at him, his face a mask of disapproval. His brow held tension, his lips pressed in a severe line. They stood in the pantry where Javier had caught Colin reorganizing the shelves. He’d only been trying to help.

“You’ve been asked repeatedly not to interfere with Jean’s pantry, not to mention his cupboards and ice box and cutlery and…” Javier took a deep breath, followed by an exasperated sigh. “Your job is to obey his instructions in regards to the upkeep of the kitchen and to help with food prep. That’s all. I’m afraid I need to bring this to Saul’s attention.”

Colin’s eyes watered. He didn’t want Saul to be mad at him. The older gentleman who owned Hampton Road had been so very kind to him ever since Master Ned had brought him to the club. The men of Hampton Road were the only family he had left in the world since his grandmother had died right as he’d barely turned eighteen. He’d been fortunate to get a job at Saul’s bathhouse from almost the moment he’d set foot in Los Angeles—then had been even luckier when Ned had brought him to the sadomasochism club—even if he hadn’t known what that word meant at the time. After being approached many times by strange men at the bathhouse who wanted to have sex with him, he’d been relieved that Ned had suggested he come to the club to work instead. At Hampton Road, men weren’t allowed to ask him for sex unless he’d given his permission either by going into the submissives’ den or by wearing a special leather bracelet at the social mixers. So far, he hadn’t.

Javier shook his head as if in resignation. “Come along, Colin. It’s best I take you out of here anyway. Jean is having fits as it is.”

Colin had always carried himself with proper posture and kept his head up high. His grandmother had taught him that presentation was everything, that it was vital that he project to the world that he was strong—full of confidence. That wasn’t all she’d taught him, however. She’d explained the way of things to him, had helped him to understand that while there was nothing wrong with wanting a man over a woman, he had to keep himself safe by not revealing that fact to most people. She’d also advised him to wait before he had relations, to save it for the right man. He missed her so much.

Trailing behind Javier left Colin with the impression that he was being marched to his doom. In his mind, the worst thing that could happen would be Saul becoming angry or disappointed in him. Even if the board members threw him out in the streets for being disobedient, it wouldn’t matter as long as Saul wasn’t mad at him. He owed him so much for not only giving him a new job, but for taking him in as a resident at Hampton Road.

They ascended to the second floor of the three-story Tudor Revival mansion located in the most beautiful neighborhood Colin had ever seen. He’d been told it was San Marino, a very exclusive area south of Pasadena. It was much nicer than any of the places he’d lived near in Reno, Nevada.

They abruptly halted in front of one of the imposing mahogany doors. Everything in the large home was elegant and masculine. There was a strength in the décor—the woods were dark and solid, the carpets thick, the objects d’art made of bronze and heavy crystal.

Javier gave the door a light knock. “Master Saul. It’s Javier, sir. There’s an issue regarding Colin that needs to be addressed.”

The latch clicked, the knob turning right as the door swung wide open. Saul grumbled, “What has the little dickens gotten up to this t—” He stopped short, his eyebrows shooting up. “Ah. Colin.” Saul chuckled. “Since Javier saw fit to bring you personally to my study door, I imagine something very dire has occurred. Come inside then.”

Saul stood to the side, gesturing to the interior of the room before turning to Javier.

“Thank you, Javier. I’ll take it from here.”

Colin’s shoulders stooped as he advanced into Saul’s study. His grandmother wouldn’t have been very proud of him at all in that moment. But his heart hurt so much his shoulders were too heavy for him to hold up anymore.

“There, there, boy. Have a seat and we’ll figure things out, hmm?”

Colin chanced a peek at Saul, surprised to see the hint of a smile on his lips and a twinkle in his eye. He couldn’t imagine why the older gentleman wasn’t scowling instead. As he lowered himself onto one of the velvet-cushioned side chairs, he ruminated over how many times he’d needed to be reprimanded. In every single instance when he’d promised not to touch or interfere with things at Hampton Road, then did anyway, he’d let Saul down.

But he just couldn’t help it. He was compelled to keep everything around him in a perfectly organized manner, the way he thought they should be arranged. But instead, all he did was upset everyone who didn’t view things the way he saw them. It wasn’t anything he did maliciously, he really wanted to contribute, do his part. Back at his home, he’d not only cared for his grandmother personally, she’d also let him maintain the house to his standards. Never once had she complained that she didn’t like it. On the contrary, she’d praised him for his hard work and he’d gone out of his way to bring the smile to her face that his meticulous efforts had inspired.

Saul handed him a glass of water he’d poured as Colin had settled himself on the chair. After giving Colin the tumbler, he ambled over to a humidor then proceeded to cut, light then take a strong puff of a thick cigar. Colin shifted uncomfortably. The only time he ever saw Saul smoke was when they were having one of their little ‘chats’. At last, Saul sat on the love seat across from him. He leaned back, draped his arm across the top of the small sofa then crossed his legs.

“Would you like to tell me why Javier brought you up here? Or would you rather I discuss it with him first?”

Colin attempted to straighten himself in his seat the best he could. He cleared his throat so he wouldn’t mumble or sound mousey, and he made sure he held Saul’s gaze. Grandmother had practiced with him so he’d never give the impression that he was weak. It was yet another warning from her. She’d explained that he’d need to offset his smaller stature by projecting strength and that he must always be honest and own up to his mistakes.

“No, sir. I can do it. I didn’t listen to Chef Jean when he warned me not to interfere with his pantry. I was wrong and I’d like to ask for your forgiveness.”

Over all I really loved this one. Made me want more from the series in the future.

Omg friends, you have got to read this book, it is wonderful and you will love it as much as I do! Thanks Morticia, for continuing with the brilliance of this series!

Share what you thought about Begging to Serve PRINT and earn reward points.

Other books in the The Hampton Road Club seriesView Series Page