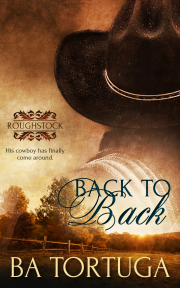 Book 5 in the Roughstock series

Landon knows who he wants, he’s been dreaming about Adam Taggart his whole life. Tag, though? He thinks Landon’s too poor, too young, too wrong to be his.

Landon Gaudet may not be the best bull rider on earth, but he knows that’s where the money is in rodeo. His Cajun heart is more involved with horses, though, and with finding the cowboy he’s been dreaming of all of his relatively short life. Adam Taggart has been around the block more than once, and while he thinks Landon is special, he also thinks the kid deserves better than a safety man with more than his share of notches on the bedpost.

Adam does everything he can to resist Landon, but there’s not a man alive who doesn’t love being loved, so eventually he gives in. Landon can’t believe that Adam is finally with him, that his cowboy has finally come around to his way of thinking. The only problem is that Adam isn’t sure he deserves love, or that he really has any to give. He questions everything from his need for Landon to his family’s assertion that he can do better than a boy from the bayou. Can Landon show Adam that sometimes magic is real, and that all you really need is to have a little faith?

“You met Adam?” Sam Bell asked, leading Landon across the yard, the piles of bull-riders and their women just filling the place up. Shit, the ropers and the family hadn’t even made an appearance yet. By midnight, the booze and the music would be flowing, and the whole bayou would ring.

Landon did love it here at Beau and Sam’s farm, more than almost anywhere, and Sister was here, Cotton and his gal, Em. Even Adrian and Packer.

Landon nodded. Sam’s words got better every time they chatted together, and Landon was happy for it. Him and Sister, they prayed and lit candles for the man, spent hours on their knees with Maw-Maw’s rosary beads clicking. Sister’d even sacrificed a chicken for healing, pouring the blood out during the new moon to suck the sickness and hurting from Mr. Bell and into the dirt.

His sister was pure hoodoo, witchy as all get out, but he’d never met a better traiteur, or treater. Magical healer. Didn’t reckon he ever would.

Landon blinked up, the sun bright as a penny, and the glow surrounded a tall, tall cowboy, making the man shine. Landon caught his breath, the universe spinning.

Shit fire and save matches.

Ever since he’d been a boy, he’d done dreamed of this very second. Right here. Right now. The cowboy would have a light-blue shirt on, a belt buckle from a 1999 roping championship. There’d be a tattoo on the inside of the man’s wrist when he went to shake—three blue circles in a row, touching. This was his cowboy. His family. The one meant to be his amant.

Kid. Like he was some petit fils. “Comme ça?”

Landon held a hand out, and, sure as shit came from a goose’s ass, there was that ink on the man’s wrist, permanent. Three blue circles in a row. One. Two. Three.

This one was his, deep down. In his body cells. “Pleased. You want a beer?”

Adam smiled at him, eye lines wrinkling up like to catch the sunlight. “You legal to drink, boy?”

To drink. To fuck. To dance. To catch him the cowboy the bon Dieu offered to him.

He wasn’t no child. Not no more.

Adam looked him up and down, one eyebrow arching. “Well, then. C’mon. We’ll have us a couple three beers before things get crazy. These Cajuns, they’re nuts.”

You had to be crazy to love it here in the swamps.

“Mr. Sammy? Mr. Sammy, you home?” Landon stamped the mud off his boots, the rain just coming down in sheets. Lord have mercy, it was gon’ be sticky as all get out, once the storm blew over and the sun came in. He’d been out to M’sir Robechaud’s place, looking into a foundering mare for the last couple three days, and, Lord help him, he knew if he went to his home ’fore suppertime Laurel would have his ass in a sling, helping down at the barn.

Served to reckon that Mr. Sammy would be bored and hunting for something to do. Maybe they could go roping. Landon could always use the practice.

Beau Lafitte answered the door, and it was an amazing thing to have the current bull-riding champion right there in front of him, larger than life. Well, Beau wasn’t much bigger than him, so large as life, he guessed. Large as the scowl on the man’s round face. Lawd, lawd.

“Sam is sleeping, kiddo. How you doing?”

“Oh.” His shoulders slumped. “Been working down to the Robechaud’s. Just thought I’d say howdy.” Maybe get him a sandwich and a visit. Put his feet up and tell a tale or three. Even if they didn’t go ropin’.

“Well, come on in. You let him sleep a bit and then you can jaw. Hell, right now you can entertain the clown. Coke! Dill! We got company.”

His eyes went wide. Mr. Coke was there? Well, shit. Bullfighter Fearless Pharris was like a fucking god among men—better than a bull-rider, maybe even better than the Cowboy King, Ace Porter. Coke Pharris was…shit. A hero.

And Dillon, well, that rodeo clown made big money for wearing makeup and shaving his legs, yessir.

“You sure I ain’t bothering y’all? I ain’t wanting that, not a bit. I just wanting to say hi.”

“Nope. Sammy gets tired sometimes, is all. Now, come on.” Beau motioned him on in, and a pair of long-eared, low to the ground hounds came barrel-assing around from a back hallway, leaping for him like he was a rabbit on the run. These weren’t Beau’s bloodhounds, no sir.

I loved all three of these fantasies! This book is definitely better than the first. The men in the fantasies all seemed to connect better. What I’m really hoping for is the conclusion to the relat...

I love this series...If you enjoy cowboys or anything involving the rodeo, you have got to read this series.

Share what you thought about Back to Back and earn reward points.