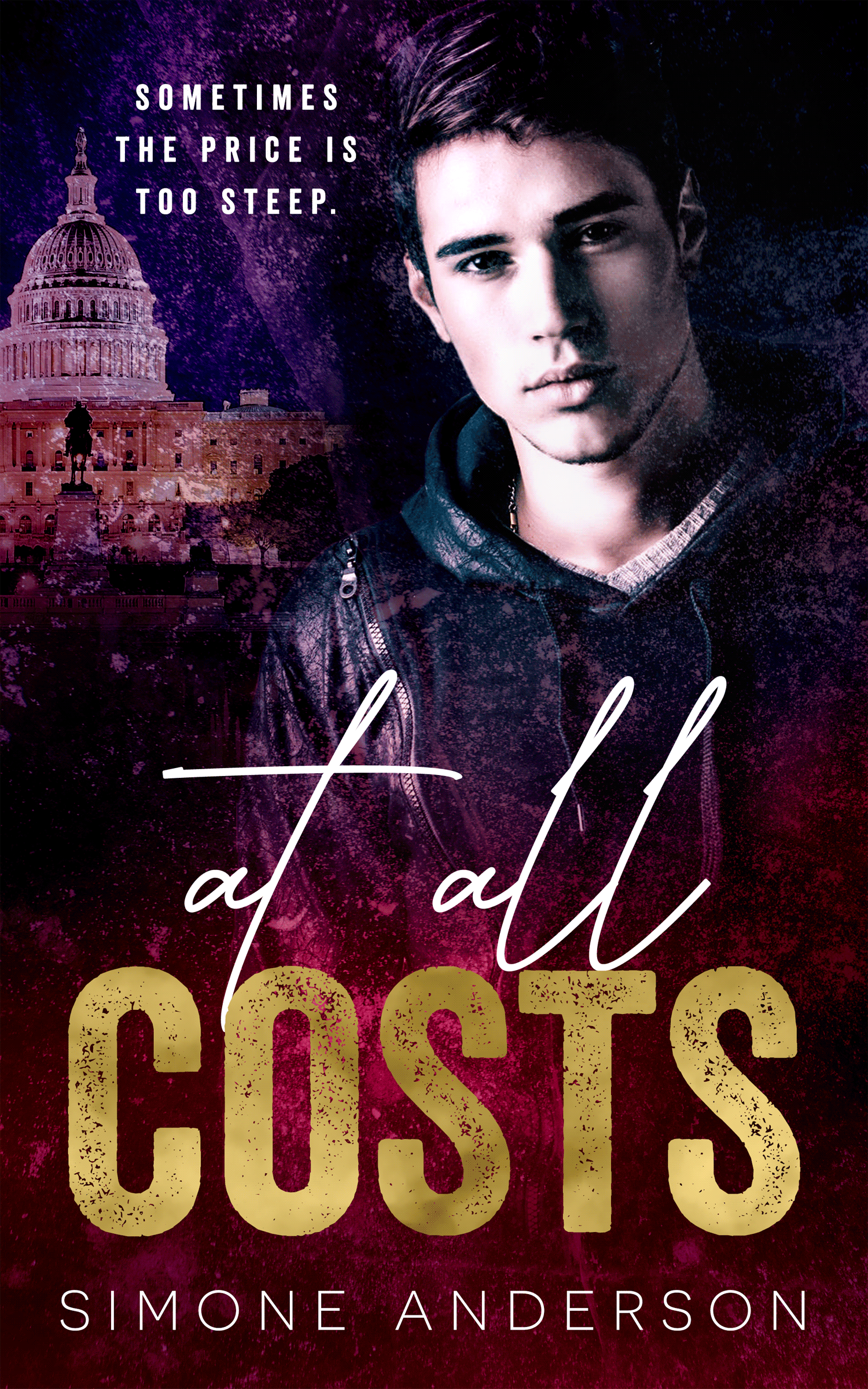 At All Costs PRINT

Sometimes the price is too steep.

Riley Hamilton, RJ to his friends, is in New Orleans for a last vacation with his best friends before they each head off to pursue their own career. Riley is destined to work in his family’s company—a position he doesn’t want and can’t refuse. During a night of drinking, an Army veteran he’d fought with earlier in the day saves him from would-be kidnappers, and, in the process, Riley finds his world turned upside down. Riley has always considered himself straight, knowing his family wouldn’t allow anything else. When he finds himself having to pretend to be gay in order to stay alive, he also has to confront the reality of his life.

Kaden Tennison is an intelligence officer tasked with protecting the only son of a wealthy businessman, at all costs. What should be a simple bodyguard assignment turns out to be anything but. Unsure who can be trusted, the pair embark on a cross-country road trip to find out who is after Riley and, more importantly, why. Kaden denies their burgeoning relationship, knowing that at all costs sometimes means the price is simply too steep.

Riley Hamilton, RJ to his friends, smiled at the pretty brunette behind the bar and slapped his credit card down on the counter. Any other night and he would have tried to sweet talk his way into the cute little bartender’s bed. She was his favorite type—petite and slender with a larger-than-average bust size, accentuated by a tight black V-neck T-shirt. He’d never had trouble bedding any woman he wanted. He never lied about his intentions. There was no need. There were more than enough women who would rather have a night of fun over anything long term, especially in New Orleans. The Big Easy was simply crawling with groups of women. Sex hadn’t been a problem. Life hadn’t been a problem.

“Macallan M, double, straight up. And a beer. Whatever's dark and on tap.”

Riley scowled. “Well, do you at least have Johnnie Walker Blue? That’s drinkable.”

The woman nodded and poured him the drink.

Riley paid for his drinks and slammed back the whiskey. He picked up the plastic cup of beer and pushed his way out of the crowded bar and onto Bourbon Street. He mumbled an apology to the group of men he bumped into. This week was supposed to be one last final hurrah with his friends before he started working for his father. He was being groomed to take over the family business. One he had no interest in at all. He hadn’t been asked. He’d been told.

Riley blew out a breath and jammed a hand through his hair. He’d managed to stay out of his father’s business for nearly five months after graduation under the guise of applying for a job. He had. He just didn’t have any experience outside of school. No real marketable experience was what he’d been told more than once. He didn’t care. Charles did.

“Hey, handsome, something on your mind?” a pretty blond asked, tracing a long-painted fingernail up and down his arm.

“Ah no,” Riley answered, shrugging off the contact. It was a blatant lie. “Not interested, sorry.” The phone call from Charles in the early afternoon had effectively killed his mood. Two hours later his day went from bad to worse after an unexpected run-in with a moron who wanted to fit into a world that he didn’t belong in. He tossed the empty cup into a nearby trash can then ducked into the nearest bar and made his way to the counter. Unsure why it bothered him still, Riley ordered another shot of whiskey and a beer. Paying for both, he left a generous tip. Riley slammed back the shot and carried the beer with him back outside.

A commotion farther down the street drew his attention before he turned back toward his hotel. Strong arms grabbed him on either side. Beer spilled all over him as the cup tumbled to the pavement. Forced away from the gathering crowd, Riley fought his attackers, struggling to get away. Turning his head from one side to the other, he tried to catch the details.

“You’re coming with us, pretty boy,” the man on his right said in a thick Southern accent.

Both men had similar builds, slightly taller than himself with muscular bodies and dark hair. The rest of their features were masked by matching New Orleans Saints ball caps.

“Don’t think so.” Riley’s words slurred together even as he pulled and kicked. His stomach rolled and the hair on the back of his neck stood on end. He was overmatched. He knew it without a doubt. Maybe if he threw up on them, they’d let him go. It was a good thought, except he’d been drinking long before he’d been legal and could hold his liquor. There was no way he’d had enough to drink for that.

Riley stumbled and fell to his knees. Shaking his head, he tried to orientate himself. The man who’d been on his right lay several feet away, face down on the street. A man in a black leather jacket kicked the other man, sending him flying backward. Riley pushed himself to his feet. He swayed and stumbled. The newcomer caught him before he fell.

“Let’s go.” The voice was commanding, the vise-like grip insistent.

“Who are you?” Riley tried to wrench his arm away from the other man. “Like hell! I’m not going anywhere with you. Or them.”

People around them started to stop and stare. The newcomer swore and maneuvered him through the crowd and down the next block.

“Come with me if you want to live.” The man pulled him down the street.

Riley yanked his arm free. “Okay, seriously, that is the cheesiest pick-up line ever. And completely wasted.” Riley shook his head. “I’m not gay.”

“First, it’s not a pick-up line. Second, gay, straight, in the closet or not, I don’t care. You need to come with me if you want to live,” the man said, peering over Riley’s shoulder.

“The only place I’m going is back to my hotel room to sleep.” Riley rolled his shirt sleeves up.

“Riley James Hamilton, we have absolutely no time to stand here and debate this. Your hotel room, your entire life, in fact, has been compromised.”

Riley stopped and stared at the man. The buzz he’d been working on disappeared. It was the same man he’d had the run-in at the hotel with earlier in the day. A soldier with the military’s Purple Heart patch sewn on his jacket. Riley groaned. He hadn’t exchanged names with the other man. There was no way the man should know who he was.

“You’re the guy from the hotel. Who are you? How do you know who I am?” he asked, leaning against the wall.

The man pulled him down the block to the next intersection and up the street. “Right now, probably one of the few people who doesn’t want you to end up in the morgue. And the only one who can keep you out of it.”

“Okay, enough with the cryptic espionage bullshit, James Bond. Not only am I not going anywhere with you, I don’t have any idea who you are, and no one wants me dead. If anything, I’m better alive to use as ransom. However, that would mean Charles would have to actually give a shit about me, which he doesn’t.” Riley stopped outside a small grocery store.

“Shit!” The man grabbed Riley’s arm. He pushed and pulled Riley farther down the street.

Riley forced himself to focus on where they were and where he needed to be. They turned onto Bourbon Street. Riley tried to pull away. His hotel was down the street a few blocks. If he could get there, he could shower, change, and sleep off this nightmare.

“In here.” They ducked into a bar just as one of the men who had tried to abduct him rushed by them.

From the start of At All Costs by Simone Anderson there is a lot of mystery and intrigue surrounding trust fund brat Riley Hamilton. While in New Orleans, what begins as a last fling before embarking on re...

Share what you thought about At All Costs PRINT and earn reward points.