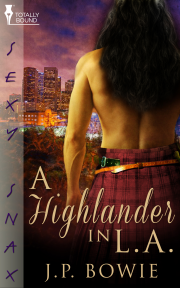 A Highlander in L.A.

When on duty LAPD officer, Darren Holden, is told to check out a possible dead body lying in an alleyway, he finds a man who is unconscious but very much alive. Not only alive, but gorgeous—and wearing a kilt. Darren is sure he knows the man, he just can't remember where or when they might have met. It isn't until that night, unable to sleep, that he realises the stranger is a man he'd been dreaming of for some time—a man who had made love to him night after night.

The Last thing Duncan MacGregor remembers is that he was home in Glen Ardor, Scotland, betrothed to Margaret Macallister as a bond between their two feuding clans.

Darren isn't sure if Duncan is playing a game, suffering from amnesia of just plain nuts, but his attraction to Duncan outweighs his scepticism and he takes him home, determined to find the truth.

Duncan believes he was enchanted by a witch who told him his destiny was not in Scotland, nor to be married to Margaret but to have a life of love and adventure with a man—the man he had dreamt of night after night—Darren.

As much as Darren wants to believe him, his common sense warns him of the sheer impossibility of Duncan's story. Nevertheless, the overwhelming sexual attraction both men feel for one another leads to a night of passionate lovemaking.

Even then, Darren's logical mind refuses to accept that such a thing is possible, but when a dangerous event threatens to tear them apart, Darren must be a believer or lose Duncan forever.

This story has magic, time travel, and a sexy Scot...

Very fast paced book following these two men from different times...The author did a wonderful job describing the characters and their feelings...

Share what you thought about A Highlander in L.A. and earn reward points.