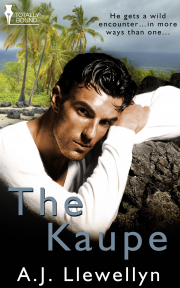 A.J. Llewellyn tackles the sin of pride in 'The Kaupe'

Dino Perez is a super-hot Hollywood makeup artist who is used to dating the most gorgeous men in town. When he meets the dynamic and sexy—but not very handsome—art dealer Alek Briatore, pride stops him from accepting him as a suitor.

He doesn't tell his friends what happened, particularly since Alek has become a well-liked part of their group. Obsessed with his mountain man, Dino sneaks back to the forest, hoping for another wild encounter. He gets it…in more ways than one. He discovers his lusty forest friend is a supernatural being—a kaupe—and soon learns that pride makes even the smartest man make extremely foolish choices…

"Aloha! Aloha!" Dino waved, blinking into the morning’s bright glare as he spotted his friends standing in front of a row of tiny, fake grass shacks, with pristine thatched roofs. The shack with the emerald green signs marked National Car Rental, their designated meeting place. They’d all arrived!

He was madly pleased to see everybody had made it. He was already in tropical idyll mode thanks to the lei greeting he’d received at his arrival gate via his package deal through Pleasant Holidays. The fact that one now had to pay an extra twenty-five dollars for the traditional Hawaiian welcome didn’t bother him too much.

What did bother him was that he hadn’t spotted a single hot guy on the plane and now none of his friends seemed very happy or excited to see him. As he dragged his suitcase on wheels across the sweltering parking lot, nobody moved a muscle or returned his cheery greeting.

"Can you believe we were having drinks in Los Angeles last night and here we are two thousand miles away...together again at lunchtime?" he called out.

Nobody said a word. Dino Perez didn’t think a thing like flying safely from one place to another was small potatoes this day and age. To him, it was nothing short of miraculous. This trip is meant to be!

His friends stood in a small semicircle, preoccupied with apparent mini-dramas, judging by their long faces. His heart sank.

"There’s a line." Jay pointed. His tone suggested it was the end of the world.

Dino shrugged and dug into his laptop bag for his sunglasses. Man, it was hot. He couldn’t remember Oahu ever being this humid. What the hell had happened to the island’s gently wafting trade winds? It was spring. It was supposed to be perfect temperatures. Not stifling. He glanced around him. Construction going on everywhere. More and more cars were jammed into the gigantic multi-car rental agency lot at Honolulu Airport than he’d ever seen. More and more office buildings blocking out the wind...and the perennial palm trees.

The classic line from Joni Mitchell’s Big Yellow Taxi reverberated in his mind...

They paved paradise and put up a parking lot...

Gone were the days when half-clad men and women rowed to visiting ships in small canoes, brandishing sweet-smelling leis and the promise of so much more.

Ah...those must have been fine, glorious times. Nowadays you clicked a link for the privilege of a factory-produced, scentless, cheerless greeting.

Dino eyed his three friends as they all glowered in the stifling heat. Flàvia, his forty-year-old friend who dreamt of being a cougar, was going to be his roommate. She wore jeans and a T-shirt, which surprised but delighted him. She always wore suits and heels back home. He hoped she’d left every last strand of pearls she owned with them. She was very cool towards him. Oh, great. This is a spiffing start to our holiday.

This story is the darkest in the anthology but also the most challenging of the three. A.J. presents a symbolically chilling message of what can happen if we become too prideful. If you like scary,...

Share what you thought about The Kaupe and earn reward points.