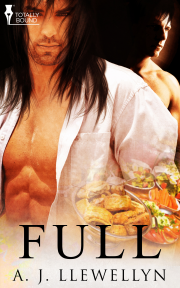 Barney loves food. He loves to love food, but food doesn't love him. It has ruled his life and wrecked his relationships. Will he ever feel…full?

Barney Calloway is a super-successful voice-over actor in Hollywood. He is, however, extremely overweight. He has struggled with his weight his entire life. Things come to a head when he demolishes half of his sister's birthday cake before she can even set eyes on it.

Leaving her house after her party is over, he finds a business card tucked under his windshield wiper with only one word:

On the reverse side of the card is a toll-free number which, out of curiosity, he finally calls. A woman's voice tells him his order has been processed. Order? What order? He awakens the next morning to find he's lost one hundred and three pounds. Overnight, he's gone from being a lard ass to a hot ass and nothing will be the same again…and unbelievably, all the changes aren't necessarily for the better. His family members' reactions are weird and his old love, Diego, really struggles with the new Barney.

Will Barney ever have the life and the love he craves? And will he ever really feel…full?

Publisher's Note: This story has been previously released as part of the Sharing the Billionaire anthology by Totally Bound Publishing.

It started with me stuffing my face with somebody else’s birthday cake, and ended with my finding a mysterious business card that sent me on a bizarre, life-altering journey with just one word— 'Full'.

It started with just one rose.

I’d lifted the lid just to check on Cyan’s creamy, two hundred dollar creation from Sweet Lady Jane bakery. I’d been so good up until now. As I waited on the 101 freeway-turned-parking-lot near the 405 interchange, I got antsy. It was hot. Fall was always hotter in Los Angeles than the actual summer.

On the radio, local blowhards John and Ken were discussing the outrage of a pizzeria in the Los Angeles suburb of Maywood that only accepted pesos for pizza. Whilst they gnashed their teeth over this and the whole illegal immigration issue, all I could think of was how much I’d like a pizza right now. Since I didn’t have one, cake seemed like a pretty good substitute.

I really did open the box just to check on that expensive cake. Honest.

The delicious scent of rose-infused icing tickled my nose and shot straight through to my taste buds without my permission. Just one icing rose. I could do it. I could cover up the space. At the age of thirty-two, I’ve been hiding my eating habits for years. What was one single rose?

Mmm…so tasty. I ate it in one gulp, my starved senses wallowing in all that butter cream. For three days I’d been on my new Weight Watchers diet and my body had no idea what had happened to it. Dare I eat a second one? I looked around. Cars on either side of me, the drivers in varying degrees of stress.

But I had a cake.

That’s when my problems started. The cake didn’t look right. I had to even things up a little and pick a rose from the other side. Uh-oh. Now it looked like it was missing something.

On the radio, John and Ken screamed at some hapless guy from the pizzeria who could barely speak English.

"This isn’t Mexico, amigo!" the radio hosts shouted in unison.

I turned down the radio as I peered inside the box. The cake looked weird. Okay. I’d gone too far. Maybe…okay, maybe if I ate a couple of leaves that would make things look better. I checked the dashboard clock. Ten minutes to six. I had ten minutes to make it to my sister’s Encino house in time for her pre-dinner drinks.

I ate a rose from the middle edge of the cake, twisting the box around on the passenger seat. I took a credit card from my wallet and used it to smooth down the icing. I began to worry about bacteria from the card. Hell, I’d welcome death by bacteria if my sister saw the cake in this condition and freaked out. She’d murder me for sure, but in a slow and painful way. She’d make me watch Zumba DVDs or something. She was an exercise freak.

Blinking, I wondered what the hell had come over me. I was on a strict eating plan of twenty-nine points a day on Weight Watchers. How many points were in a single rose? How many had I eaten? Two, three…nine?

Now, I did feel a bit guilty. It sort of looked…bare. It was like that episode of I Love Lucy…you know, the one where Lucy and Ethel wear the same dress and rip the flowers from each other’s bodices live on camera.

Each time I tried to fix my problem, I made another one. I began to panic, especially when the traffic started to move. I drove with the cake perched on my knee. It got all mushed up in the box. Maybe that would be my excuse.

Once I exited the freeway, I pulled over to do some damage control. I drove the few short blocks to Cyan’s house then checked my face in the rear view mirror for tell-tale signs of icing. Man, the mint-flavoured leaves had been lovely. I checked the cake one last time. It didn’t look too bad. Hey, maybe I could score a part-time job as a cake decorator.

I grabbed her birthday gift, a DVD set of Richard Simmons’ Sweatin’ to the Oldies she’d requested, and the cake and hoofed it up the front walkway. It took quite a while for Cyan’s husband, Hugo, to open the front door. During the wait, I devised a foolproof plan—I would hold the box down low and their new Rottweiler pup, Gravy, would undoubtedly bowl me over.

Applauding my brilliance, I couldn’t wait for him to send the cake flying and for my transgression to go undetected. My sister was my diet Nazi. She would go bonkers. God, what had possessed me to go gonzo on those roses?

"Hey," Hugo said as he opened the door. He grabbed his goofy dog’s collar and pulled him back. Bad luck for me.

Poor Gravy scrabbled to get close to me. Hugo looked peaked. As well he should. With everything going on with him lately, he actually looked damned good. "How’s work?" he asked me.

He seemed to sag a little. "Three of my clients are facing tax evasion charges thanks to their former business manager. I put out one fire and another one starts."

Gravy kept jumping up, trying to reach the cake.

The story is a good reminder that regardless of the circumstances and whatever we feel holds us back from having what we desire, we are in control of our destinies; our happiness, i.e., the fullness...

Share what you thought about Full and earn reward points.